Hudsucker Posse Moves From The Street To The Stage 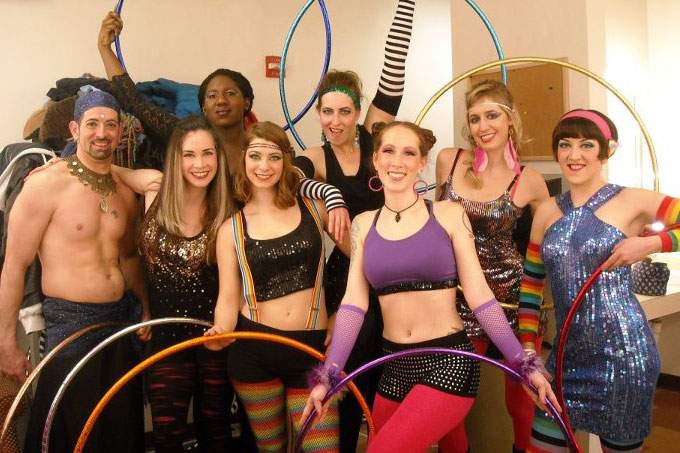 Much of the American public was reintroduced to the hula hoop in 2009 when First Lady Michelle Obama hooped at a Healthy Kids Fair.

But it was a performance at the 2008 Lotus World Music & Arts Festival by the March Fourth Marching Band that initially caught Paula Chambers' attention.

"When I saw those hoop girls in their crinolines and their striped tights and their hula hoops, I said I can do that," she says. "But of course at first, I couldn't do a thing!"

She didn't play with a hula hoop as a kid, so she's learned everything from scratch. Three years after helping to found Bloomington's hoop dance troupe The Hudsucker Posse, she now makes her own hoops and teaches hoop dance at the Windfall Dance Studio.

A Boy And His Hoop

"Some of my friends who had been hooping had been at me for almost a year to try it," says troupe member Wayne Britton. "I was like are you kidding, this is ridiculous looking. I'm going to feel like an idiot."

He first got into hooping as a way to stay fit, "to cut my waist back because I was getting the spare middle-aged tire." One day he decided to try it, "and I didn't take it off for 2 1/2 hours. I just had such a great time in it."

Britton has been hooping with the troupe for two years and now owns 15 hoops.

Music Of The Hips

At the dress rehearsal for their Lotus performance, the hoopers don brightly colored costumes and twirl equally eye-catching hoops around their waists, necks, legs, arms all parts of the body are fair game for the Hudsucker Posse. They're dancing to what could best be described as edgy circus music. The whole scene feels like something out of a punk rock carnival.

Chambers thinks that's what Lotus Director Lee Williams was initially attracted to. "I don't know why I like their look, but I do," says Williams.

He says that even though the Hudsucker Posse isn't a musical act, they fit well into the vibe of the festival. He has seen them perform once before, "and it was something very special in terms of the costuming and the music they were dancing to, the smiles on all the people's faces."

Performing on a stage at this year's festival, he adds, is taking the group to a new level of professionalism.

The troupe has performed at the Lotus Festival since 2009 as part of the Arts Village and the street scene, but this is their first year on a stage. Their performance will take place at Jake's Nightclub, a 21-and-over venue, which Chambers says will allow them to try some things new things not seen at their all-ages shows.

"We are planning what I am referring to as our Cirque d'Hoop show," she says.

Williams is aware that there could be adult elements to their show, "but I really don't know exactly what that means for them specifically. I kind of know what it generally means. We'll just have to wait and see."