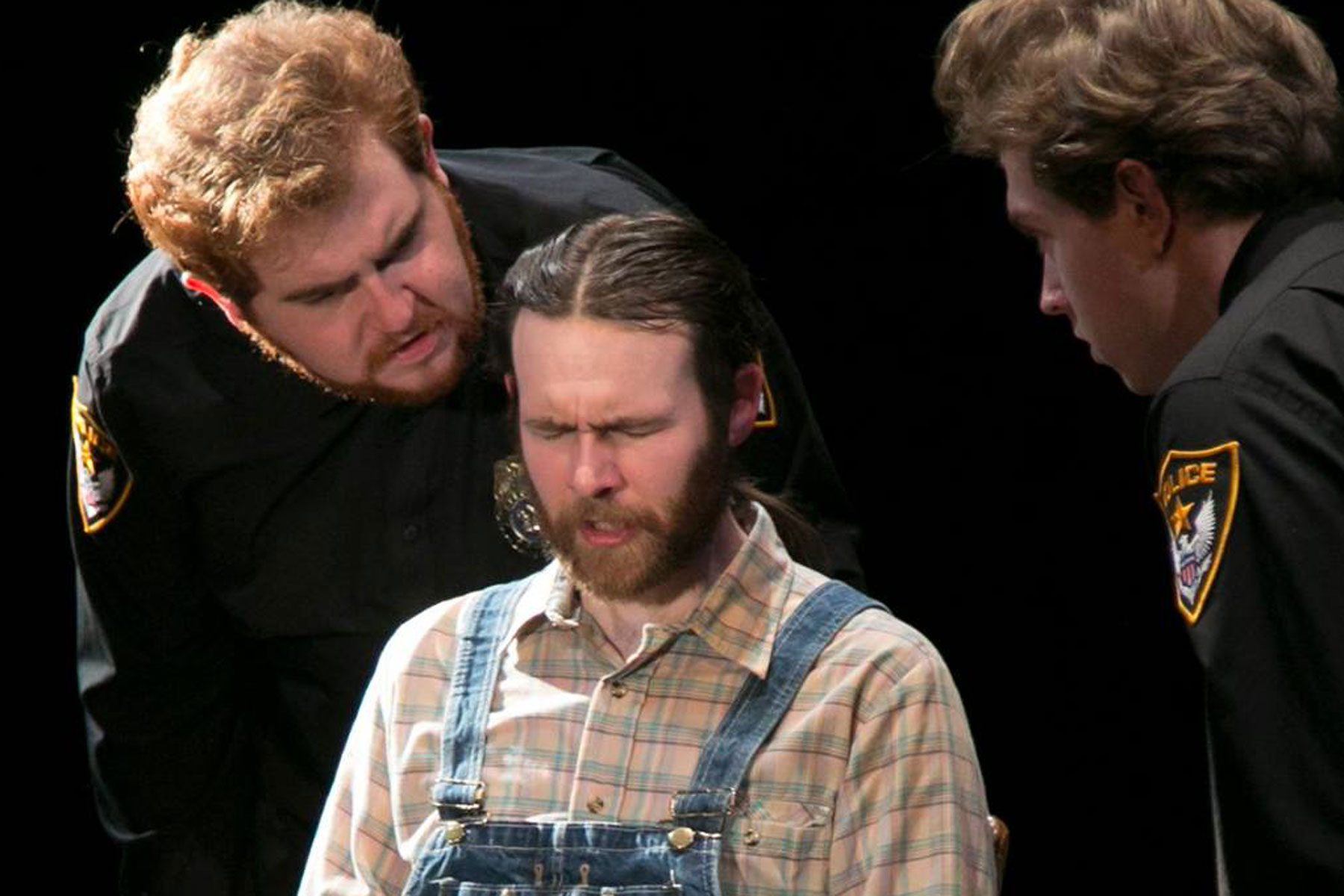 Exonerated at IU's Wells-Metz Theatre is a wonderfully insightful character driven exploration of the worst ills of the criminal justice system.

Actors and first time playwrights Jessica Blank and Erik Jensen were so moved by a phone call at a theatre conference that they set out to meet and interview people across the country who had been successfully released from death row. The project grew into a reading and then a further refining with deeper research into court records and archives. Kathryn de la Rosa, the IU production's dramaturg writes that ninety-nine percent of the words we heard are from actual interviews and official records.

In potently dramatized stories, the six main characters of Exonerated, three African American and three Caucasian tell their stories of arrest, trail, conviction, prison time on death row, exoneration and the mixed effects of freedom. Weaving the themes of the evening and his own story is the poetical Delbert played by the eloquently well-spoken Ansley Valentine.

Mathew Murry's Gary was an innocent of the murder of his parents, but convicted as police took an imagined scenario and claimed it as a confession. On death row he preserves his sanity by learning to embroider with blue threads from his jeans and orange from prison ware. Returned to life he's happy, but a bit uncertain and the stories from the past still surround him.

Robert, Rickard Saint-Victor is the most outgoing and animated of the cast…a ball of vocal and physical energy. His crime, as he sees it, was being black at the right place at the wrong time. Time on death row taught him to focus his anger and mix it with eloquence in his appeals. Freed, Robert's still baffled by a society where he can't get a license to race horses, but can purchase a gun.

Nicholas Jenkins' Kerry is one of the longest servings on death row from Exonerated. A fingerprint from the crime scene was misused to put him there and it wasn't until twenty-two years later that DNA from that same scene proved the someone else was the killer. Kerry's friendship with gay people was used in court to paint him as a potentially violent animal and in prison led to brutal abuse that he's still scarred by.

David, Kevin Renn seems the most vulnerable and least sure of all the characters. As a young black man, he seems simply to have been the suspect of opportunity for a campaigning sheriff. David struggles both in prison and out with matters of faith and as Kevin Renn remarked in a talk-back, "David needs a hug."

Meaghan Deiter's Sunny has the most complicated story. She and her boyfriend Jesse, Reid Francis Henry were with a friend when he shot and killed two policeman and then fled with them. Once captured the friend plea bargains and his testimony sends both of the couple to death row. There the two continue a fanciful letter relationship even using Japanese dictionary's for personal thought. Sunny is eventually released, but Jesse was executed. As played by Meaghan Deiter, Sunny seems remarkably resilient and very positive about the freedom she now has.

Jolie Manning played a number of roles in Exonerated and was a bit of sunshine as Gary's supportive wife and Kerry's new happily pregnant wife. Lee Martin too had a number of parts and as Robert's wife added a bit of comic relief with her reactions to this headstrong young man.

In addition to playing Sunny's boyfriend Reid Francis Henry was very effective as a sheriff, a police office, a bar buddy, etc. Nicholas Munson did a fine job as the killer who ratted on Sunny and Jesse with strong appearances as a violently homophobic attorney and the doomed brother of Kerry.

The main focus of Exonerated is on those convicted and their stories of justice twisted, misused and denied. For anyone wondering at the lack of attention to the people who helped them Ansley Valentine's Delbert has a metaphoric answer. "When you take your car in for repair, you don't tell the mechanic what's good about it."

The set in the Wells-Metz by Jeremy Smith is mostly the well-chosen and placed chairs for each of the six with a lovely backdrop of hanging chains. Lighting designer Allen Hahn does a very nice job of focusing our attention and with sound designer Sheumais McHenry they do a lovely thunder and rain shower with those chains. Costumes by Chen Chen were all well fitted and fitting. Director Liam Castellan chose the play for its serious qualities, but he never forgets that its strength comes from the very reality of the characters and the full spectrum of their humanity. There's action, violence, pain and suffering, and there's also human warmth, humor and resilience.