You Can't Go Home Again: Reflections At The Beach 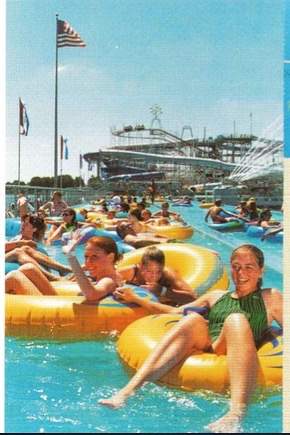 It's been close to ten years since I last visited Indiana Beach. On my visit this summer, I wondered if I'd experience the same eagerness that I had as a child to taste the sticky sweetness of a melty ice cream cone, feel my stomach flip flop on rides, and relax in the cool waters of Lake Shafer in Monticello, Indiana. Even then, however, I knew it wasn't normal to be part of a family that owned an amusement park.

It's a place different from any other amusement park that I've ever been to. Something I heard over and over again on my recent visit was that this place is special because it retains the charm of a family-run business. As my Grandma Joy Bailey explained, "being a small park, you could actually probably sit down and have a coke or a milkshake or something and let your children go ride rides for thirty  minutes or an hour and have them come back to you because it was very safe."

Being a small park, you could actually probably sit down and have a coke or a milkshake and let your children go ride rides for an hour and have them come back to you because it was very safe.

These days, nearly a million visitors make their way to Indiana Beach in the span from Memorial Day to Labor Day. The 90-year old amusement park sits on the Honey Creek side of Lake Shafer, boasting roller coasters, water slides, boardwalk concessions, a ballroom, and an upscale restaurant, as well as more unusual attractions, like daily water ski shows, hungry carp, and an award-winning haunted house.

Founded in 1926 by my great-great grandfather Earl Spackman, Indiana Beach had humble beginnings on Lake Shafer as a summertime spot for swimming and refreshments. Then called "Ideal Beach," the lakeside attraction soon expanded to include a dance hall in May of 1930. Tragedy hit, however, and the newly finished dance hall burned to the ground the day it was set to open. Despite the mounting pressure of the Great Depression, Spackman cleared the ashes and under his guidance a new dance hall was built in just over a month.

With the new dance hall open for business, Indiana Beach soon established itself as a popular destination for the most popular and influential music acts in the country. Beginning in the Big Band Era, visitors to the Beach danced to the music of the Duke Ellington, Glen Miller Band, and Benny Goodman.

It was there, in a small town, that visitors danced to Brenda Lee, the Beach Boys, Jefferson Airplane, Janis Joplin, Sonny and Cher, and a relatively unknown band called The Who.

Spackman's son, Tom, took ownership of the Beach in 1945. It was the highly ambitious Tom Spackman who really brought in more important music acts and set Indiana Beach on track toward becoming a full-fledged amusement park. Taking cues from other amusement parks cropping up around the country, Spackman began introducing wilder and wilder rides and roller coasters. Throughout his life, he proved not just to be a good businessman, but also an avid thrill-seeker himself. Pausing before the Sky Coaster, my grandmother noted,

My father was, I believe, about 85 and he was in Florida and he saw this ride and he actually did it, and it was on TV in Florida: the oldest man to ride the Sky Coaster.  And he bought it and we have it now here at the park.

Meanwhile, as Indiana Beach acquired the latest thrills, the fifties and sixties ushered in musicians very early in their careers. It was there, in a small town, that visitors danced to Brenda Lee, the Beach Boys, Jefferson Airplane, Janis Joplin, Sonny and Cher, and a relatively unknown band called The Who. Historian W.C. Madden, author of Indiana Beach: A Fun-Filled History, and long-time resident of Monticello, explains,

It was the place to go in the area. [It] would attract people like college students from Purdue. They'd hear, hey this rock n' roll band is coming in and hey, they wanted to come to Indiana Beach to come see this rock n' roll band. So, we had a good audience there with Purdue University close by.

My father was, I believe, about 85 and  it was on TV in Florida: the oldest man to ride the Sky Coaster.  And he bought it and we have it now here at the park.

For the African-American entertainers booked at the resort during its golden years, however, Indiana Beach was not the happiest place on earth. Segregationist ideology prohibited black musicians from spending the night in aptly named White County, where the park is located. Although Indiana Beach had a policy of welcoming all visitors, my Grandma Joy recalls white visitors to Indiana Beach leaving the water when black visitors were swimming.

In the decades that followed, under Tom Spackman's leadership, Indiana Beach remained a popular summer destination for families from all over Indiana and Chicago. By 2001, however, the Spackman family made the difficult decision to sell the park, which was eventually sold to RV Morgan in 2008. My Grandma Joy recalls this transition from family to corporate ownership with some ambivalence: "They were thinking more like [they] should be running like Great America or Six Flags… and that just doesn't work here in a small town."

The sell was not without local controversy and employee allegations of park safety violations. However, an inspector from the Indiana Department of Homeland Security found no safety violations under Morgan RV's ownership. In 2014, Morgan RV sold Indiana Beach to Apex Parks.

During my visit to the amusement park, I had the near-universal experience of seeing a place I had loved as a child lose a bit of its shine, while simultaneously realizing I had also changed. Still, I couldn't help but feel the excitement of the visitors around me and imagine the magic of Indiana Beach's past.

Hannah Boomershine is currently a junior at Indiana University, a recent transfer from CU Boulder, majoring in Journalism and Psychology. As the great-great granddaughter of Indiana Beach founder Earl Spackman, she spent countless summers at the amusement park located in Monticello, Indiana.

Take her audio tour of Indiana Beach, at the "play" arrow above.