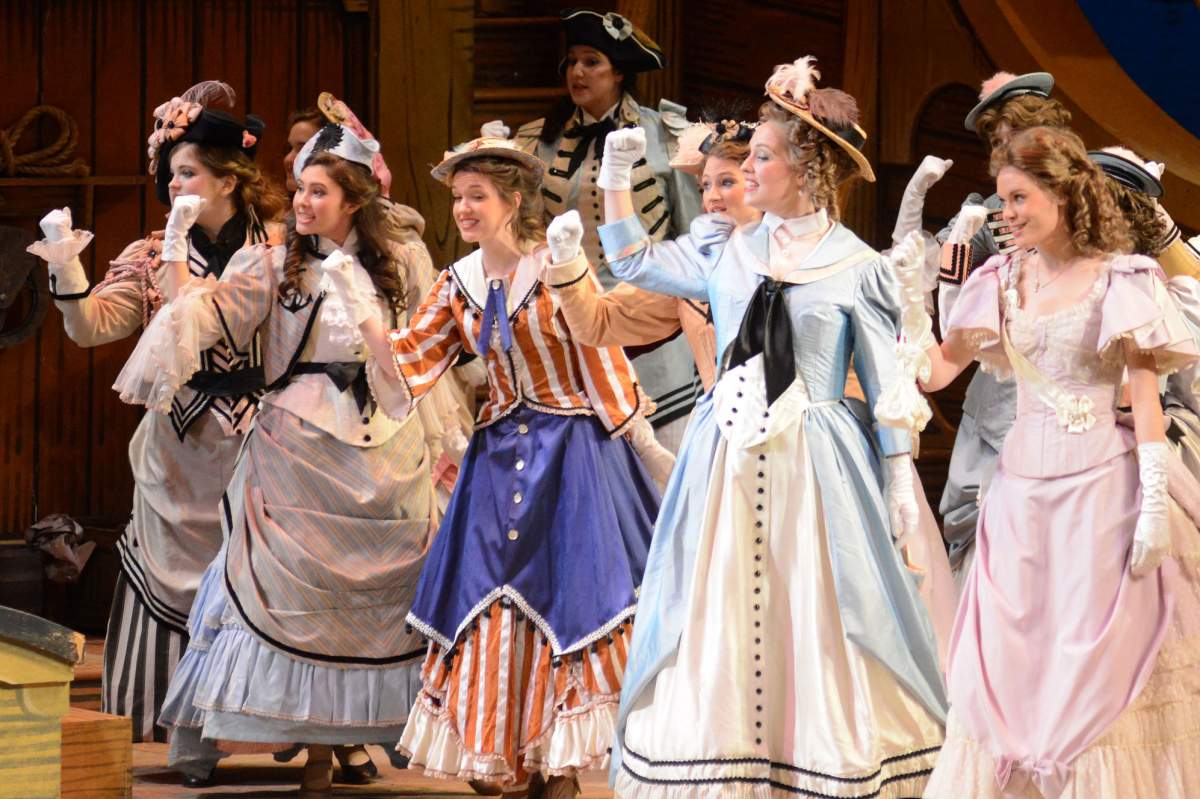 Sprightly, fun filled, colorful and an eye full are the words that I'd use to describe the IU Opera Theater's production of Gilbert and Sullivan's classic lampoon of birth, class distinction and politics  H.M.S. Pinafore.

Stage director Michael Shell's chorus of smartly dressed sailors never walk from place to place, they high step their meaningful ways around the stage. Although there are moments of thoughtful repose the principals are usually in progress as well.

The fun of course comes from the richly detailed characters.  Saturday night's among the men, Christopher Seefeldt was delightful as the fuddy duddy Sir Joseph who has risen to the admiralty through a decidedly civilian course. Erik Krohg made a strong voiced and dramatic Captain. Benjamin Smith was appealing as the sailor Ralph Rackstraw. Steven Berlanga gave a more rounded than usual performance as the much maligned Dick Dead Eye and Evan Forebes was bluffly sensitive as the Bo ‘sun.

The fun continued and the colors were added with the appearance of the ladies, including Sir Joseph's sisters, cousins and aunts whom he "numbers by the dozens." Their costumes were a delight with a riot of colors right out of old time ribbon candy.  Eileen Jennings was a winning Little Buttercup, Jessamyn Anderson made a nicely comic Cousin Hebe and Tabitha Burchett as the captain's daughter…pursued by the lofty Sir Joseph but in love with the lowly Ralph was perky and pathetic.

The eyeful that I mentioned earlier is C. David Higgins set. The delightfully detailed ship, complete with wash hanging out high above and a couple of sea gulls keeping an eye on things is a pleasure to see. Although I did occasionally wish for super titles, diction from principals and cast was excellent. Stage director Shell has placed the soloists with care and conductor Constantine Kitsopoulos was always careful to both treat us to the full beauty of Sullivan's music while allowing Gilbert's words their place.

The IU Opera Theater's production of H.M.S. Pinafore has final performances this Friday and Saturday. At the theatre for you, I'm George Walker.

At the Theatre for you, I'm George Walker.