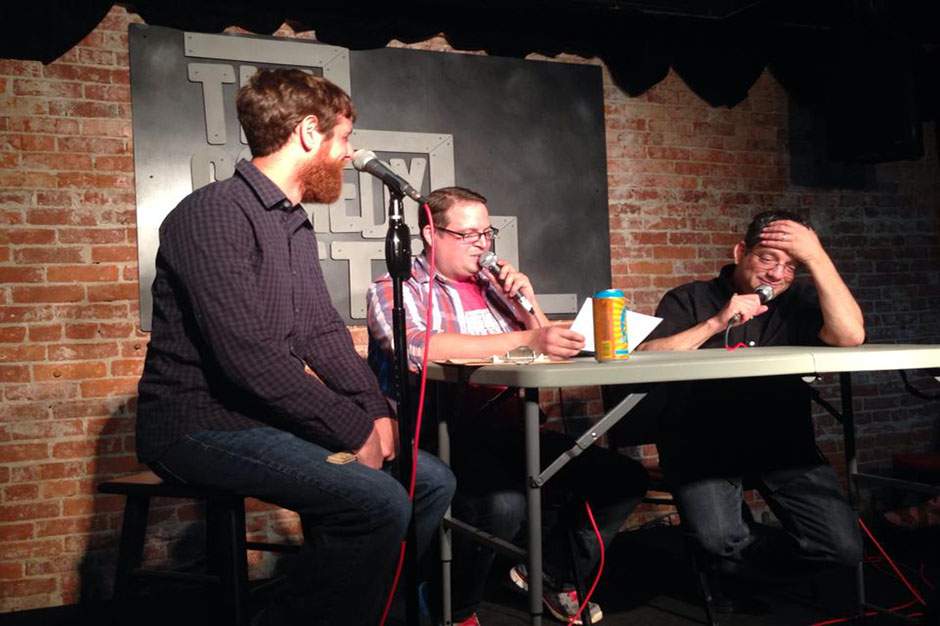 The landscape of comedy used to be limited to clubs and late night TV. That was before the explosion of comedy podcasts on the Internet. For a little over two years, two Bloomington comics have been producing a podcast called History Bluffs. Comedians Bob Nugent and Dave Britton have been involved in Bloomington's comedy scene for years. Their podcast has been in circulation for over two, and continues to grow with big-named guests such as Emo Phillips, Ryan Singer, Jackie Kashian, and Andy Kindler.  October 23 promises another live taping at Bloomington venue The Comedy Attic with comedian Matt Braunger.

They are seeing you as you think, as you process, as you make decisions – and as you do them. So that's it – that's your one take.

We weren't really seeing a lot of each other," Nugent explains, "so I was like – hey let's do a podcast, lets come up with something that's unique and something that's fun that people like to listen toand Dave was not a lot help in this departmentso I came up with the idea.  I wanted something that was like a game show and bounced that off of him and I wanted to do something about history because I really enjoy history and I thought it would be fun to do that, and I threw the idea at him and we just from that point just bounced back and forth as to what we wanted the format to be.

The comedians have a guest on the show who only needs one qualifying factor: to be funny.  The guest  then gets asked a series of questions as if he or she is a dead person from history.  Adding a twist to the show, the guest does not know who they will be until they sit down at the mic. This improvisation allows for some interesting dialogue.

For example, Jon was Benjamin Franklinand we ask him, 'Where were you born?' and he says something ridiculous like 'Zimbabwe'.  And then he has to stay with that story because we are going to remember it and we are going to keep bringing it up.

"Jon Hancuff did not, who is a uh, great local comedian, thought he couldn't do it, but then he came in – and was great," Britton claims.

"Yeah, and one of the funniest parts of the show is when it gets ridiculous. When you ask someonefor example, Jon was Benjamin Franklinand we ask him, 'Where were you born?' and he says something ridiculous like 'Zimbabwe'. And I'm paraphrasinghe didn't say thatbut just like that sort of ridiculousness and then they have to stay with that story because we are going to remember it and we are going to keep bringing it up," says Nugent.

This sketch aspect of the show brings forth interesting questions about what it means to do comedy in a live setting, versus a non-live setting.

Indiana University Professor of Communication and Culture, Susan Seizer, who followed several regional comics for a documentary film explains:   "In a live performance, you've got that one shot at it. And that's what makes it so – not to make too much of a pun of it but lively and enlivening, is that it is live. They are seeing you as you think, as you process, as you make decisions – and as you do them. So that's it – that's your one take."

Britton and Nugent tape some of their podcasts live in front of an audience, at the Comedy Attic. They'll be doing that with Matt Braunger October 23.  The History Bluffs podcast translates into a live comedy show well.

"For me, the whole idea of the podcast sort of comes to fruition – the whole game show aspect of it. As a performance piece, I think it plays really well live," says Nugent.

We do this thing called ‘Rulers of History,' And we didn't get buzzers so instead we just got rulers so to buzz in, you smack Bob on the hand with the ruler.

Despite all the worry and concerns that can come from performing live, the producers enjoy adding special events to these live tapings.

"And we get to throw in extra stuff for the live episodes too that we've just started doing, uh – uh, the first segment that Dave runs, which is pretty fun. It's like an interactive trivia contest," says Nugent.

Britton explains, "We do this thing called ‘Rulers of History,' And we didn't get buzzers so instead we just got rulers so to buzz in, you smack Bob on the hand with the ruler."

While both comedians enjoy doing stand-up, they hope to continue the success of their podcast, History Bluffs.

"While stand-up comedy is something that we love, this is just as fun for me. So , it's just a really nice way to for us to  – I guess – stay relevant," says Nugent.

The podcast allows comedy fans to feel closer to a performer, claims Nugent

Stand-up is already a really intimate thingyou learn  a lot about a person.  I think in a podcast even more so.

"If you like a comedian, like Todd Glass for example, or Greg Barrens or any of these guys that are A list comedians and then they put out a podcast, you're going to listen to that because it's them, only not as constructed," says Bob.

"Stand-up is already a really intimate thing," Britton ventures; "you learn  a lot about a person and I think in a podcast even more so."