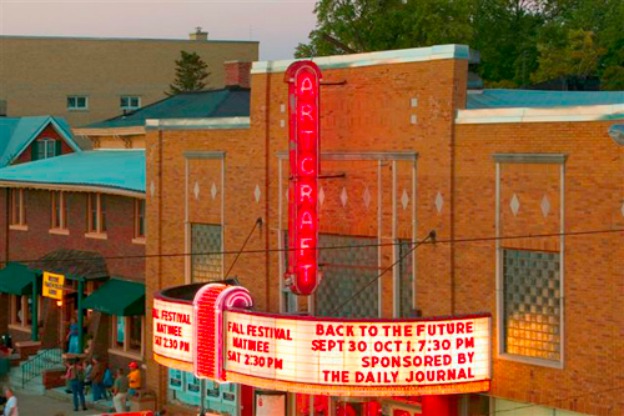 Mike Mettert picks up a film canister. It looks like a grey octagon shaped toolbox.

"Keeping a piece of history alive is a hoot," he says.

Mettert is a projectionist at the Historic Artcraft Theater, in Franklin Indiana. He runs two projectors originally built in the 1950s. Mettert opens a canister and loads the film through the projector, in preparation for screening the 1935 horror classic, The Bride of Frankenstein.

Whether it's monsters, ghouls, slashers, or the living dead, the movies are an integral part of how people celebrate the Halloween season. In Franklin, many people turn to the Artcraft Theatre to find their favorite old scary movies and a sense of community.

The Artcraft is over 90 years old. It was originally built in 1922 and has had several renovations over the years. The theater's bright neon marquee and round Art Deco design make it stand out. But, this all took a lot of work.

I know the ghosts of the Artcraft are pretty well pleased with the way Franklin Heritage is keeping the place.

A historic preservation group called Franklin Heritage acquired the building in 2004. At the time, it was falling apart.  The director of Franklin HeritageRob Shiltsbecame a bit of a Doctor Frankenstein himself.  "The Artcraft is the Bride of Frankenstein," Shilts jokes, "and were bringing it back to life. It's Alive! It's Alive!"

"The fact that the theater is thriving is bringing more and more people to town," Shilts explains. " It's made what is a quaint little small town even better...now everybody wants to be here and I don't think that that was always this way."

Movie and A Show

The Artcraft seats around 600 people and shows movies roughly every other weekend throughout the year.  Before each film they screen a short cartoon. And at evening shows, there's a pre-movie show with a raffle and prizes. They often sell out. Shilts says much of this is due to the nostalgic cinema atmosphere and the community experience.

"The building doesn't really feel alive until the people get there. There's something about that place, there's an energy about it when people are there."

A matinee crowd fills the auditorium. The 16 foot screen towers above a stage lined with glowing plastic pumpkins. Before each film, Shilts walks on the stage to introduce the film.

Back in the projection booth, Mettert waits for his cue to change reels. He says never used to believe in ghosts.

"When you're up here in this projection booth waiting on a changeover and someone walks behind you, you can't turn around because you're watching for your cue dot," Mettert explains. "When you finally make the changeover, there's nobody in the booth. You know projectionists of old up here are keeping an eye on what we're doing. I know the ghosts of the Artcraft are pretty well pleased with the way Franklin Heritage is keeping the place."