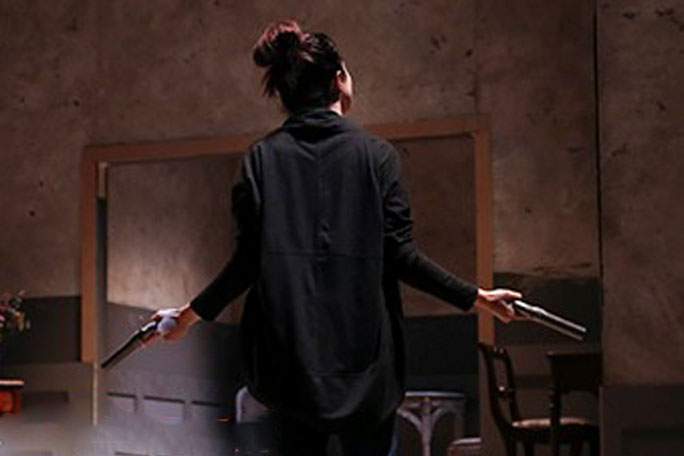 In 1890 there had never been anything quite like Henrik Ibsen's Hedda Gabler. No heroine from the Greeks, say, Medea, nor Elizabethan tragedy, think, Lady Macbeth, no maiden from the 18th and 19th century romances was quite like her. Since then she and her sister Strindberg's Miss Julie have had lots of daughters, but even today, one hundred and twenty-five years later none are quite like Hedda Gabler.

The play in IU's Ruth N. Halls Theatre, directed by Dale is action packed, but fast moving and seems shorter than its two and a half hours. Hedda Gabler begins as a bitter drawing room comedy, ends as a stark domestic tragedy and it still packs a punch.

Hedda, played by Abby Lee, comes onto the stage as a stone faced bitter woman just returned from what was her six month honeymoon. Her only joy in the moment is to humiliate her husband's stoically loving Aunt Juliana, Meaghan Deiter.  Hedda's a woman well aware of her magnetism and talents but trapped in a very restrictive world with no inner resources or compass other than fear of social embarrassment or humiliation

Mathew Murry plays Hedda's husband, Tesman, as an energetically cheerful sort. He's a clueless nerd, still thrilled that he has married the lovely Hedda and secure in his love for his scholarly pursuits. Tesman is totally unaware of the less than gentlemanly designs that Henry Woronicz's Judge Brack has on Hedda and the still smoldering passion that surrounds her earlier relationship with his lost to dissipation colleague Loevborg, Christ Handley.

Loevborg has been aided in rehabilitation and in his own work partnering with Kristen Alesia as Mrs. Elvsted. Hedda charms her and draws out the details of her aid for Loevborg and their work together. In an echo from Ibsen's The Doll's House, Mrs. Elvsted like Nora has left her husband, but this time with a specific purpose. Hedda is jealous of Mrs. Elvsted's partnership with Loevborg and she can't deal with a healthy productive man. She taunts Loevborg back into alcoholism and on to his death.

Judge Brack has been looking for a social way to control Hedda and her participation in Loevborg's death gives it to him. In the final scene as the judge calmly plans a nice domestic triangle while Tesman and Mrs. Elvsted excitedly pour over Loevborg's notes, the trapped Hedda in a romantically framed moment shoots herself.

Tesman and Mrs. Elvsted are dumb struck, the play's final line is the Judge's…"People don't do things like that."

Today we might call Hedda a narcissistic sociopath, and possibly offer some consideration for her character out of concern for the male dominated society that so restricted her. But perhaps it makes more sense to say that she is a bitter, cowardly, short term schemer with an evil streak and some romantic delusions. The IU production of this dense drama moves quickly and there's a surprising amount of humor and even laughter in some of the wry moments.