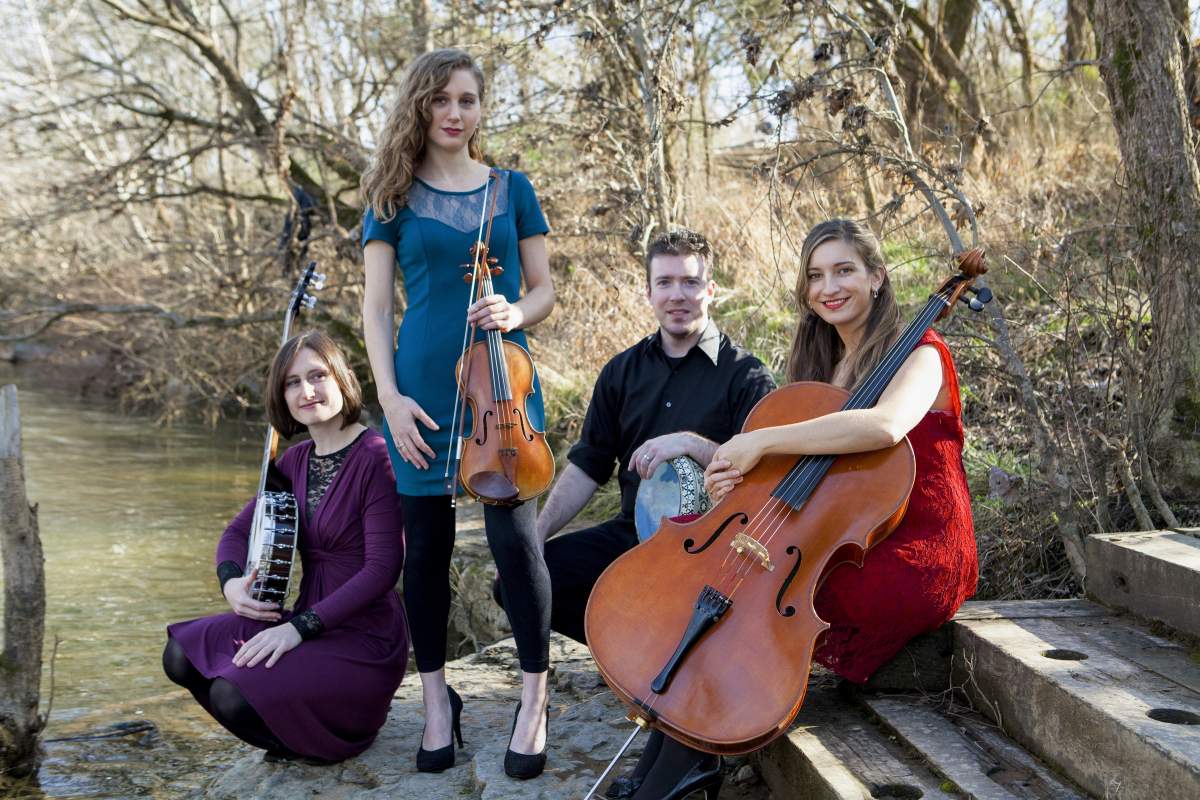 This weekend, four Jacobs School of Music alumni will launch their latest CD at a live concert in Bloomington, but it might not be what you're expecting from Jacobs grads. Violinist Jordana Greenberg, banjo player Rebecca Reed-Lunn, cellist Maria Di Meglio, and percussionist Chris Burgess mix folk music, Americana, blues, and bluegrass, with a just touch of classical.

The members of Harpeth Rising spoke via Skype from their home base in Bowling Green, Kentucky.

DW: Tales from Jackson Bridge marks the fourth release in as many years for the eclectic quartet Harpeth Rising. And just like on previous CDs, the band devotes serious time to crafting and fine tuning original songs.

JG: You know, I think in some ways it feels like an imperative to us to play original music and that's why we all went into this in the first place. You know, we have all this classical training, but we decided to move, at least slight, away from that because we wanted to created original material because that our passion. Almost even before we were doing it, we knew that we felt we to do that.

DW: So for a group that takes pride in creating original music, it would seem like a daunting task to continue pumping a new CD each year. Not so, says Greenberg.

JG: Several people have commented on sort of that being a rapid rate of production I guess, but we just keep making CDs when we have the material. And so the truth is that this is a very exciting profession, I guess. I mean, we love what we do, and so we're inspired by everything. And so we constantly write, whether we're on the road or we're at home.  And every time we have a collection read to go, we record it.

RRL: The very first banjo riff was kind of the first thing that came about, and then I presented it to everybody, and then we all collaborated on it actually while we were on tour. I think we were in Nebraska when we were right most it and then in Paoli, Indiana for a lot of it as well. It was really a fun challenge for us because it's actually in ten, which is for most of the piece, so its an unusual time signature for us, folk music especially, and it combines some different kinds of American things, some Latin music, a little bit of [Maurice] Ravel as well, because classical music is definitely still a part of what we do.

DW: Not to get too far away from what their fans have come to expect, Harpeth Rising has included one traditional song on the CD, but as Jordana Greenberg pointed out, their slow-burning instrumental version of House of the Rising Sun is closer to a jam session than any real arrangement.

JG: The unique thing about House of the Rising Sun for us is that every time we perform it, we improvise large parts of it, which is incredibly fun. It's one of my favorite things. And so it turns into something new every time we play it. And so, in that sense, we wanted to capture at least one version of it. And also it was just something that a lot of our fans had requested that we record.

JG: To me in this album, I think that we all felt very confident about what we wanted to say and how we wanted it to sound. In some ways that's a result of making four albums in four years. It seems like in some ways, you know, an amalgamation of what came before and then, at the same time, the beginning of what we're going to do next. This album, it feels solid, it feels confident, and it feels exciting.