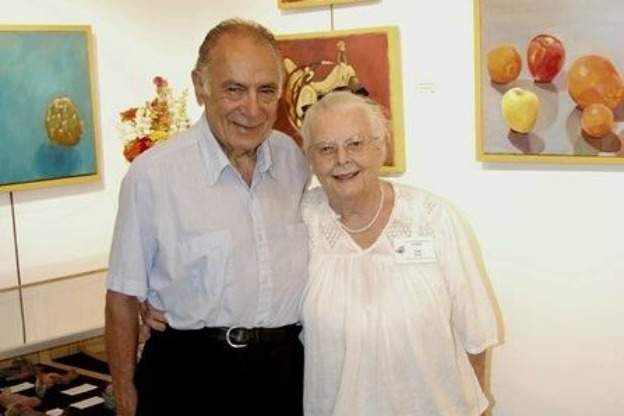 It's a Wednesday evening in early January, the Bloomington city hall atrium is filled with a far larger crowd than usually anticipates the city council meeting. There are trays of canapÃ©s, special seating, and atmospheric lighting. And rather than political rivals, the crowd is full of old friends, some of whom haven't seen each other for years.

The occasion is the recognition of longtime arts patron and advocate Patricia ("Patti") Pizzo, whose 18-year tenure onÂ the Bloomington Arts Commission is coming to an end.

"It's a wonderful night," declares fellow arts commissioner member Paul Sturm. "It makes me proud to be a resident of the city when people like Patti are honored this way."

"Someone earlier this evening said, 'Well, this is quite a spread', " remarks Miah Michaelsen, the city'sÂ Assistant Economic Director for the Arts.Â "And I said, 'Well, Patti Pizzo is quite a person'."

Those assembled to witness this official recognition of Bloomington's doyenne of the arts have long been aware that the woman of the hour is "quite a person".

"We moved here in 1964 and the Pizzos were some of the people we met early on," recalls Charlotte Zietlow, who hasÂ been active in Monroe County politics and non-profit organizations for more than four decades.Â " Both Patti and Tony in their ways made Bloomington palatable at that time.Â When we met them, and found out about the wonderful things they were doing, we realized we could stay here."

"Patti"Â and her husband Anthony Pizzo moved in Bloomington in 1951, at which point she enrolled in Indiana University, eventually receiving a BA in Art History and an MA in Library Science.Â While raising her children, Patti took initiative in the communityfrom establishing the Friends of Art bookshop in the Hope School of Fine Arts, and driving the restoration of the John Waldron Arts Center and the Buskirk Chumley Theatre , to shepherding the Monroe County artists' postcard seriesall the while pursuing yeoman's work for more than a dozen cultural, environmental, and social serviceÂ organizationsfrom Wylie House to the Sycamore Land Trust.

Enumerating Pizzo's accomplishments in a lengthy proclamation from which she reads at the gathering, Michaelsen officially declares the dateJanuary 9, 2013to be Patti Pizzo Day in the City of Bloomington.

Patti takes the news in stride, even managing to produce one of her famous zingers. "I wish you would have told me this morning," she chides Michaelsen, "so I could have started celebrating earlier!"

City officials aren't the only ones on the receiving end of Patti's sardonic sense of humor.

"The first thing I have to tell all of you," begins her wry and concise acceptance speech, " is that I'm overwhelmed that you're here, but don't think this gets you out of coming to my funeral."

The adoring crowd includes a number of Pizzo's family members, including her husband Anthony-physician, city councilman, and state legislator-and her oldest son Angelo Pizzo-the screenwriter and producer best known for the films Rudy and Hoosiers.

The man who's been credited with making one of the greatest sports film of all time had an early, if unlikely introduction to his craft, thanks to his mom.

"She took me to some movies that most six- and seven-year olds don't normally go to," Angelo remembers, "like Ingmar Bergman and Luis BuÃ±uel films, for example.Â I had many nightmares based on The Seventh Seal!"

"I took you to see The Seventh Seal?" Patti inquires with some surprise, before quickly asserting, "He's great director"

"Yes, he's a great director," concedes her son, "but The Sign of Death kept visiting me every night after that!"

Patti's intrepid appetite for art has not diminished over the decades.

"Patti is someone I see at every major arts event in this community," reportsÂ Jillian Kinzie, who has long been active in local politics and especially women's issues.Â "PattiÂ is not just a supporter.Â She is an avid patron of the arts, an audience member!"

"She is our leader and we're going to carry on," vows arts commissioner Lynn Schwartzberg.Â "And hopefully, live up to the standard that she set for us."

Pizzo's legacy is manifest in the McCloskey Room at City Hall, where the original prize-winning art reproduced for the Monroe County postcard series from 1990-2006 is on view.Â Another nod to Pizzo announced at the January 9 ceremony is the arts commission's resuscitation of theÂ Arts Leadership Award for Arts Advocacygiven to Pizzo in 2005 by the now defunct Bloomington Area Arts Councilas the Patti Pizzo Arts Advocate Award.