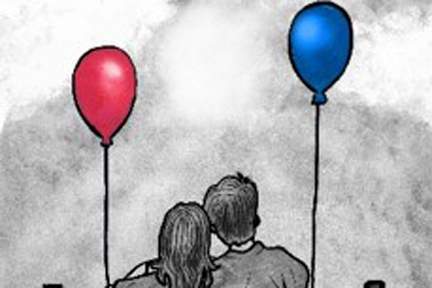 Happily After Ever by Laura Zlatos is the Bloomington Playwrights Projects Newman/Woodward drama of the year.

Janet and Darren are an attractive young couple who meet under their colorful umbrellas at a bus stop and banter energetically. Their characters seem to have no inner life and the outer display is pretty shallow. She asserts that she's always right and he admits that he forgets things. They decide to fall in love and marry instead of taking the bus.

As a harbinger of developments to come, it's Darren who throws the garter from their wedding. The two move in to their cheery apartment. Darren continues to work at some never described job while Janet cooks and cleans, and cleans.

Janet and Darren find themselves in competition both in life and in game night charades with their perfect next door neighbors Jerry and his wife Dharma. In the energetically surface world of Zlatos's play it's not a surprise that no one seems to notice that the tall stately Dharma is a man. Several times during the show Dharma says that they can't have children, but no one including her husband Jerry pays much attention.

Janet swells with glowing pregnancy and pride shared by Darren and perhaps envied by their barren neighbors. A baby is born and their some rejoicing and congratulations until closer examination reveals that the little one has both male and female parts. The neighbors are appalled and both Jane and Darren are feeling confused and perhaps a bit guilty. In a neatly staged set of figure eight dashes around the apartments three pieces of furniture the two rehearse their history looking for a source of the androgynous birth.

By the way both Christian and Jewish theologians have had to wrestle with this because of the two accounts of the creation of man and woman, one as a single being, the other as two.

Frankly, the baby gets rather short shrift. Neither Janet nor Darren are ever seen holding the child, feeding the child or even responding to its cries. In a night mare scenario of a quiz show presided over a Dharma, Darren gets off lightly, but Janet is subjected to a brutal interrogation.

In a latter visit from the neighbors they bring a new acquisition. It's a dog, a very large dog they call their baby Tommy and claim to have rescued. In the world of Happily Never After, we're not amazed that Tommy maintains that he was not rescued and that in fact his real name is Tanya. Tanya smells the "grief, confusion and perhaps a touch of guilt" on Janet and the two form a warm though tentative bond.

Although there's considerable scientific investigation and opinions on androgyny, in the play the choice of surgery comes down to the parent's decision. Janet says he looks like a boy while Darren says she seems like a girl. We don't know who prevails and at plays end both wonder if they made the right decision.

Courtney Reid Harris played Janet with just right amount of confidence and insecurity. Likewise David Sheehan was always on nicely balanced his partner. Xavier Rice was formidable as the varied Dharma. Paul C. Daily made a neat partner and foil. Ben Smith as Tanya the insightfully dry dog is probably the character most will remember. Intricate stage direction, pace and mood is neatly handled by director Ivey Lowe. Rebecca Lord-Surratt's stage design neatly works of a sparse astro turf floor with a multi-use crib that might be the next thing from Ikea, supported by Aaron Bowersox's lighting.

P.S. The BPP's Artistic Director Chand Rabinovitz has announced that the enthusiastic audience finish to the plug for sponsor Papa John's Pizza  "the only pizza you should eat" will, after only seven years of regular repetition be heard no more. I can't wait to hear what they'll come up with to replace it.