Hansel and Gretel: A Brother And Sister Story 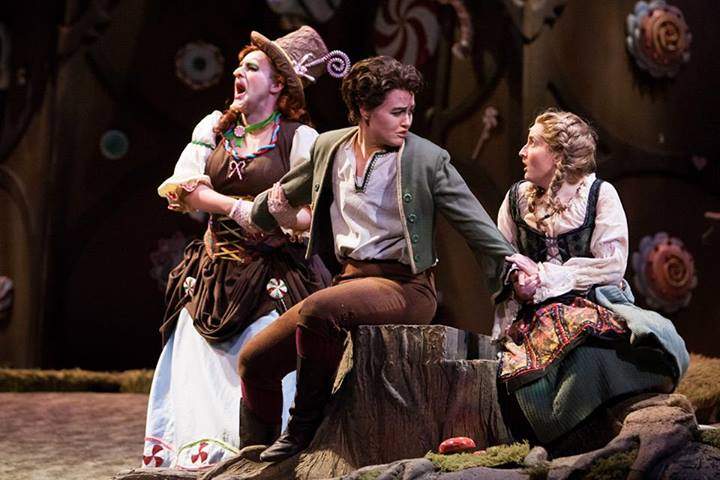 The Brothers' Grimm's Hansel and Gretel are at it again at IU Opera Theater in the musical version by Engelbert Humperdinck and his sister Adeheid.  It's sung in English with helpful English supertitles. Saturday night it was Siena Forest and Meghan Folkerts as the lazy children. Kelsea Webb was the frustrated mother who sends them off into the woods. Andrew Richardson was their boisterous easy going father. Carey Jarosik was the sparkling Sandman who helped the children sleep and Shin Yeong Noh was the glittering Dew Fairy who woke them up. Jake Williams was the cookie baking witch. Although Hansel and Gretel is not on the list for this season's Saturday afternoon radio broadcasts from the Metropolitan Opera, fans can take pride in the fact that this was the opera that initiated those broadcasts in 1931.

Siena Forest clearly relished the part of the girlish Gretel while Meghan Folkerts seemed to take real joy as Hansel, boyishly chasing his sister around with a broom. Their duets were delightful. Kelsea Webb was every bit the tired, worn out and justifiably angry mother while Andrew Richardson was the bluff, hearty father.  Gracefully moving members of the IU Pre-College Ballet were the somewhat menacing angels charged with protecting the children.  The brightly costumed Sand Man and Dew Fairy were clearly eye catching favorites of some small children sitting around me.

The hit of Hansel and Gretel always can and frequently is the witch. Jake Williams gave a masterfully funny performance with diction so good that I found myself fully able to ignore the supertitles and  enjoy his little stage bits and characterization.  His antics with the broom and the dramatic flight were delightful .  Alisia Garabrand is credited with being the actual figure on the rocketing broom. By the way the translation of Hansel and Gretel  by Cori Ellison, like the original is rhymed. Mostly it was quite graceful, but there were a few misplaced efforts at  folksy sayings that drew amused chuckles from the audience.

Although some of the songs for Hansel and Gretel do follow Humperdinck's sister's demand that they be singable by children there's a good deal of richness in the score especially for the orchestra and balances can be a challenge.. Harmonies are complex and themes appear and reappear with subtle variations. Although the evening did begin with a horn player proving just what a tricky thing the French horn can be,  followed by playing that showed why the risk is worth it and a bit of rushing of elements toward the end of the overture,  the  orchestra and singers were mostly  in graceful balance.

Arthur Fagen was the conductor with stage direction by Vince Liotta. Mark Smith added some touches to Max Roethlisberger's original design.  Brent Gault directed the IU Children's Chorus. Christian Claessens was the choreographer for the Angels from the IU Pre-College Ballet.

Indiana University Opera Theatre's production of Hansel and Gretel has final performances this Thursday at the family friendly hour of seven and Friday at eight.