Hansel and Gretel: The Wisdom of Fairy Tales

Aaron Cain: I'm Aaron Cain for WFIU Arts. IU Jacobs School of Music Opera Theatre presents Hansel and Gretel by Engelbert Humperdinck. I recently got the chance to sit down with the opera’s director, Candace Evans, who told me about this production and about some of the very first productions she ever directed.

Aaron Cain: Now, as I understand the story, you've been fascinated by directing ever since your childhood when you staged fairy tales with tiny paper theater models. Well, now, and not for the first time, you're directing a fairy tale.

Candace Evans: It's true, all of that is quite true.

Aaron Cain: Any pointers that you gave yourself as a young person that you're using for this production?

Candace Evans: Keep it interesting. And tell the story. It sounds really rudimentary and nonsensical, but that's my job. Tell the story. It's a morality story. It talks about behaving well and expecting the best and being kind. For me, with this production—the set itself is 40 years old. It's an absolute, as they have told me, treasure of the IU Opera Theater—so I'm approaching an older set, an older story, and yet trying to make it fresh and new. That's always my fascination. What can I bring to the table that maybe hasn't been brought before?

Aaron Cain: You could maybe argue that directing opera full stop is doing that. It’s trying to take something that's treasured, and an older art form, and acknowledging that, paying homage to it, while at the same time bringing out something new and interesting.

Candace Evans: Exactly so. My Master’s in Fine Arts is in theater and directing, and I've done a copious and wonderful amount of Shakespeare. And I think there is a parallel there, between Shakespeare's longevity and opera’s longevity. The good stuff lasts because it's still human truth. And so, opening it up to a modern audience is not necessarily too hard, because the same foibles and ridiculous things that we have done as human beings forever and ever, we still seem to be doing. But what is new is what our culture experiences now. We certainly didn't have iPhones even 20 years ago, so the audience comes to it with a new feeling. And of course, so do I. So it's how do you take those old stories and those old truths, and do they still apply? And in what way? Sometimes the older stories have a lot to share that we've forgotten.

Aaron Cain: Is there anything you do differently when you approach more folkloric tales like Hansel and Gretel?

Candace Evans: Uh, yes, I do think so. First of all, I'm very cognizant of the fact that the audience will have a lot of children. I'm a mom. And I fully understand that audience tolerance for sitting still has diminished over time for adults, and certainly has never been there for children. The overture for Hansel and Gretel is seven minutes in duration. And so I'm picturing a family arriving with two little ones and they come into the theater and they're excited and joyful. And they sit down, and the lights go out. And then they have to sit still for seven minutes. And I know that's going to be a disaster. I've put in a couple of surprises in order to help that transition, and, in so doing, I've given myself a new trajectory through the piece. I'm not going to give it away…

Candace Evans: …but a folkloric piece offers you to play pretend on a bigger scale. It offers more magic because, even as adults, we want to have a good story told. And when it's a folkloric story or a legendary story, we remember stuff like that from our childhood. Whether our mom read it to us, or whether our granddad whistled tunes from something ,you know, we have this collective memory of fairy tales and the wisdom of it, or the excitement of it. And I get to play in a more playful way.

Aaron Cain: It's interesting you mention how being a parent affects how you direct this particular piece, because, from what I remember about the opera, it's so much about parenthood; mostly when there are parents that are absent for most of the story, and about childhood when you can or can't be a child from one moment to the other, depending on what's happening in this story.

Candace Evans: It's dysfunctional in a lot of ways. Mom loses her temper. It's understandable, completely. They're a family that's down on their luck. And the children are expected to rise to that occasion and help. And they’re children. And they don't. Dad is a salesman, for lack of a better word, he's out peddling brooms. He has a little bit to drink. Adults sometimes don't behave well as parents and kids don't behave well as kids, and what happens to resolve that? And, as you so aptly said, the kids have to rise to the occasion. They're often on their own and confronting some pretty serious stuff. I think one of the most interesting things about the piece is that the boy and girl, Hansel and Gretel, are combative little siblings. They're not mean to each other, but they certainly are not cooperative with each other. And once they're in the forest, it has to change. We have to pull together. And I think that's probably one of the strongest messages that the piece gives us: that you've got to pull it together and achieve a goal. The magical nature of a witch in the forest that might eat you for lunch is a little far-fetched. But, then again, there are things out there in the world that, when we confront them, we'd Better pull up our socks and take care of it.

Aaron Cain: Now, you've directed many operas thus far in your career, all over the country and abroad, and several here at IU. You're also a choreographer. I'm wondering: is there any dance in this production?

Candace Evans: There is. There's a section of the opera when Hansel and Gretel are in the forest, where visions come to them. And, in some productions, there's a full ballet. And I had that option to use the wonderfully-trained ballet department here at IU. But the children sing a prayer. We call it the “hit tune” of Hansel and Gretel. It's extraordinary. And the story of the prayer, then, is discussed the next day when they wake up, as a dream of having seen 14 angels. And so, I have 14 children that will be doing that enactment. They're absolutely darling. The littlest, I think, is third grade, and they're not necessarily trained ballet students. They’re kids doing kid things. And so, it's not as much dance as I often am called upon to do in my operas.

Candace Evans: You've hit the major core of my work. Because of my background in dance. Because of my background in theater. But, most importantly, because of my background in mask work. I think one of the most important things for a performer, be it an actor or a singer, is to tell the story with their entire body. I know that sounds like I'm looking for mime, or some big extravaganza of aerobics, but I think if you just look at one simple thing that we can all relate to: you're at the grocery store and you're moving along down the cereal aisle and somebody comes roaring past you, talking on their cell phone, throwing a cereal box in, and turning the corner. And you know what kind of day they're having. You haven't seen anything other than their body, but now you know. We tell the truth with our body before we speak. Every time. If someone comes up to greet you on the street and they're going to say hello, their hand will reach out to shake your hand before they speak. Obviously not in COVID world, but we still have that inclination because our body thinks something before our mouth says something. So one of the things that I work with with opera singers is indeed mask training. Basically, the idea is that you don't sing, and you don't even speak. You have to tell a story with your body. The importance of that is so imperative to me because it puts realism on the stage. You see real people moving. And it also frees the audience up. If you're not looking at the supertitles, or the supertitles go away and you don't understand the language they're singing in, you still know what's happening if somebody comes on and jumps up and down and throws a book in the air. You might not know why, but you know they're having a pretty good time. It's always just wonderful to arrive and meet my singers. I'm percolating an idea, considering the theme, humming the music, looking at the text, but until I open the door to the rehearsal hall and meet my singers, I don't know the key component of what I get to do. And the singers here are wonderful. I have two companies, and I said to them the other day, “you know, we have to decide who sings Friday and who sings Saturday.” And it's never A and B, or the winners and the also-rans. It's never that. IU has a deep well of talent. But we have to pair them in certain ways. And I said to them, “I could have put your names on slips of paper in a hat, throwing the hat in the air, and it all would have come out golden, because you're all so good.” And that doesn't happen everywhere that I go.

Aaron Cain: Well, in addition to hearing some great singing that would have worked out great any way you sliced it, what else do folks have to look forward to with this production?

Candace Evans: Magic. I think so many of us are so…sad. I think. You know, post-COVID, political craziness, world disorder. It's not like any of that is going to be solved by this, but I think, first of all: being in a space with live music. That, in and of itself, is so magical and imperative. That's in the moment. That's for you right now. That feeling. The story, the experience of, as we enter the holiday season, the tradition of this piece. I think it speaks real volumes to what will lift spirits.

Aaron Cain: Candace Evans, thank you so much for speaking with me today.

Candace Evans: It was such a pleasure.

Aaron Cain: IU Jacobs School of Music Opera Theatre presents Hansel and Gretel at the Musical Arts Center, and I've been speaking with the director of this production, Candace Evans. More information at operaballet.indiana.edu. For WFIU Arts, I'm Aaron Cain. 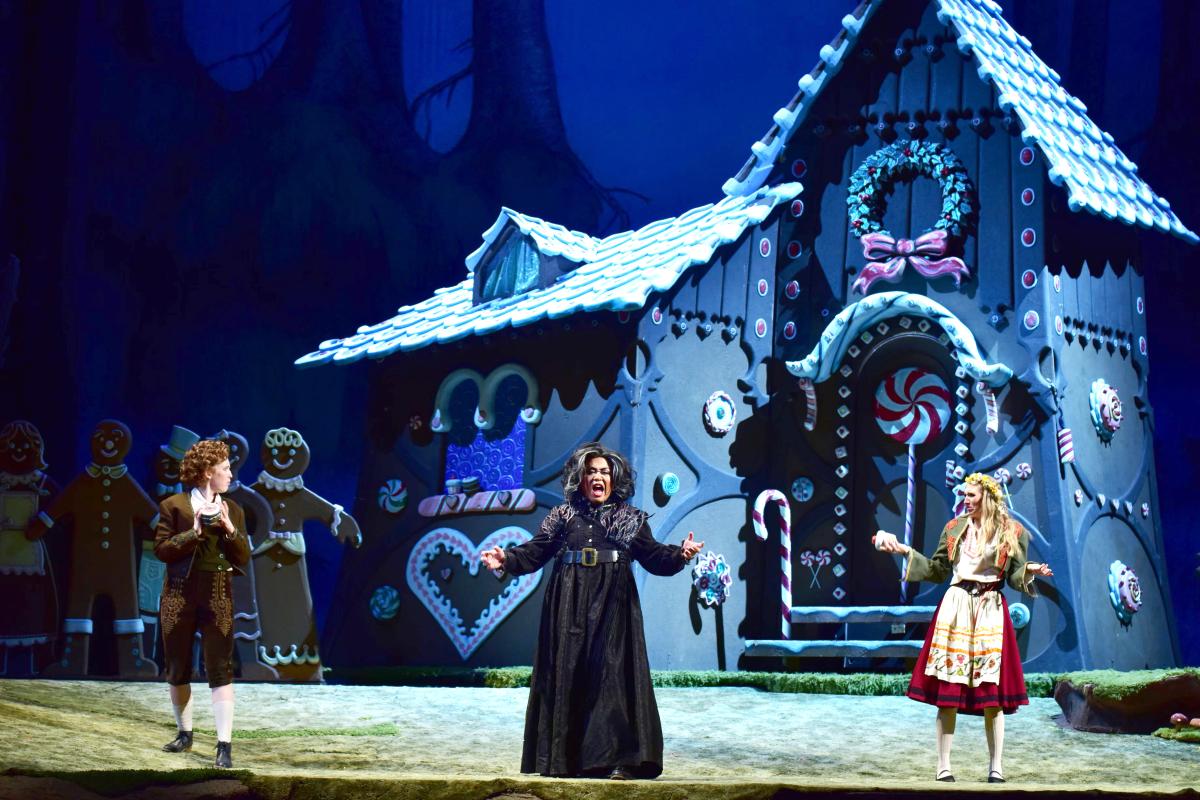 Jacobs School of Music Opera Theater is presenting Hansel and Gretel, beginning Friday, November 11. The production is conducted by Arthur Fagen and directed by Candace Evans, who has directed several opera productions at IU, around the country, and abroad.

Recently WFIU’s Aaron Cain had a chance to speak with Candace Evans about the production and her directing career.

Listen to the full interview above.

More information about the production can be found at operaballet.indiana.edu.