Hansel and Gretel, Not as Grim as Grimm! 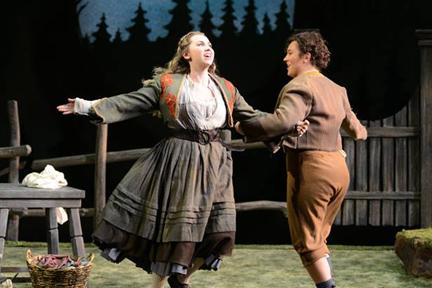 The IU production uses the warmly remembered sets from Max Rothlisberger with touches from Mark Smith. There's the outdoor cottage where Hansel and Gretel frolic and the dark woods into which they wander while picking berries. Then, the richly appointed gingerbread house rolls into view with its fence of cookie children. Shortly, the witch's colorful oven and a cage of sticks follow it for Hansel. Since Max Rothlisberger's time there have been many advances in the drama and subtly of stage lighting and it was a treat to see lighting designer Thomas Hase's work.

Traditional costumes for the show were the general rule for the parents and children. Dana Tzvekov's additional work was more on display with the forest's Dew Fairy, Sand Man and the colorful and gracefully involved extended dream ballet choreographed by Christian Claessens.

Saturday night's cast featured a playful Bridget Ravenscraft as Gretel with the more reserved Ashlyn Brown as Hansel. Hansel is the young man of the family though Gretel does indeed lead the playful dance lesson in the first scene. And, as the play reminds us, it is she who wields the wand to break the witch's spell in the final scene.

LeOui Rensburg, with a face that drew me in to her character was the harried mother. Her frustrations with the children and Yangjunlong Li as her drunken husband were obvious. And it was even more obvious that she still loved her husband. She was delighted with his success as a broom salesman and certainly cared for the kids.

Hansel and Gretel's forest is both a frightening and a comforting place. There are berries to be picked, familiar birdcalls and supporting spirits. Frances van Vuuren was the colorfully clad Sandman who presided over the children's prayer and the ballet with the backdrop of the angels. Counter tenor Elijah McCormack sang the graceful song of the Dew Fairy.

The hit of the evening was tenor David Smolkoff as the Gingerbread Witch. There was laughter at his antics and even a bit of applause for them. The biggest reaction was of course to the explosion of his oven and the transition of the ginger bread fence figures to the children's chorus prepared by Brent Gault.

Humperdinck's success began quite inauspiciously as a modest contribution of four songs for a sister's puppet play. She based her work for children on a version of the Grimm Brothers' tale that considerably smoothed out the desperation of the family, the cruelty of the mother and the complicity of the father. Encouragement from his family with a wide-ranging array of thoughts and more pointed suggestions from fellow composer Hugo Wolfe followed. The story was again smoothed out and became a paen to God's love and family togetherness. Over a three year period this led to first an expanded version with sixteen songs and finally to the premiere in 1893 of the opera as we know it today.

IU Opera Theatre's production of Hansel and Gretel travels to Clowes Hall Friday November 16th at seven-thirty and Saturday the 17th for a family friendly matinee.