Every Time A Bell Rings... 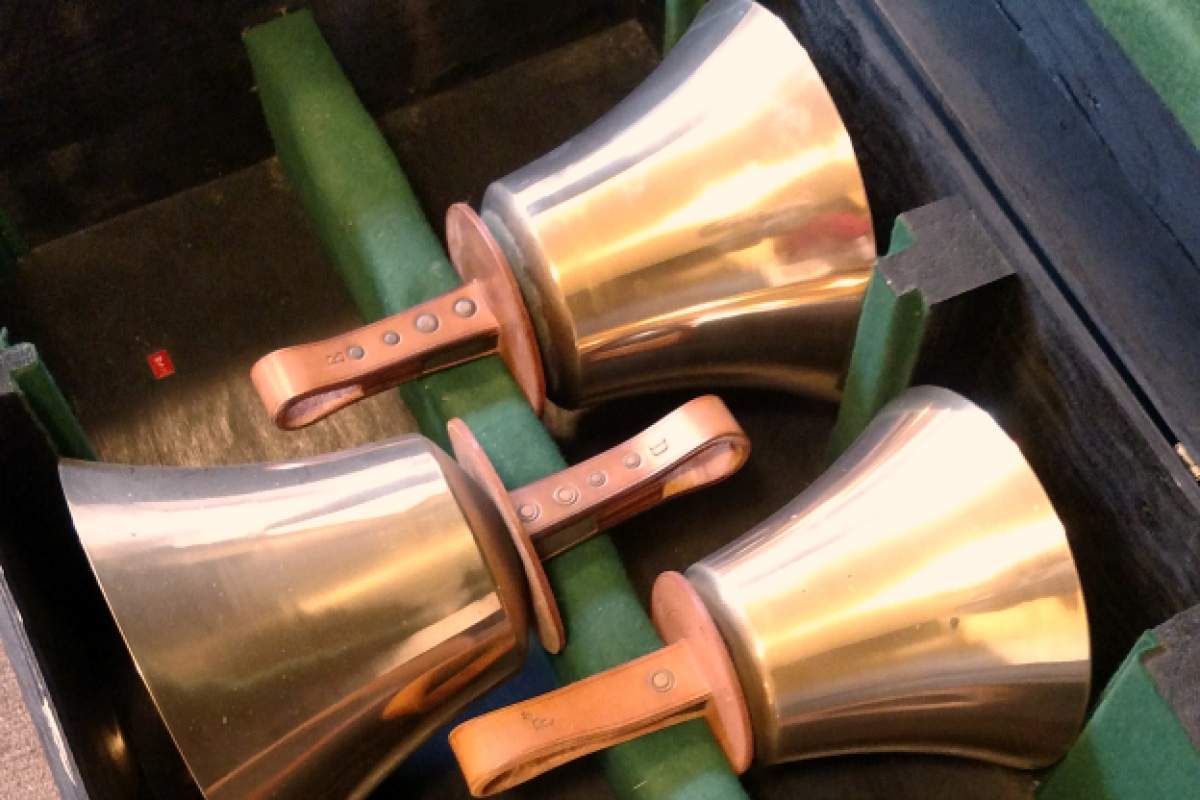 A few months ago, I made a surprising discovery.

Imagine finding a Stradivarius in your grandmother's closet. That's kind of what happened to me. I'm the Director of Music at North Christian Church in Columbus, Indiana, but instead of a violin, it was a set of rare handbells, tucked away in the church's basement.

I had the chance to show Erin Hawkins what I found. "Oh my goodness! They are much larger than I expected." Hawkins is the Director of Marketing at the Columbus Area Visitors Center. That was her response to seeing the low C. That handbell weighs eleven pounds. It has a diameter of nearly twelve inches. A new one would cost almost $2,000.

She tried out some of the little bells too. In the process, she learned a bit about proper handbell technique: "So, it's all in the wrist, I can tell."

Hawkins is normally the person giving the tours at North Christian Church. However, she's never seen these handbells before. These bells were made by the Whitechapel Bell Foundry, the same company that made Big Ben and the Liberty Bell. Their handbells are widely considered the best in the world. A new set, today, would cost nearly $40,000.

These bells were purchased for the church in 1959 by a parishioner. With my budget as the music director, I couldn't even afford to replace just one.

Marian Wyke remembers the golden era of the bells. "We have had several bell festivals that are very well attended. Our sanctuary lends itself perfectly." Wyke was there when they made their debut on Christmas Day, 1960. She's been in the choir for decades.

Evolution Of A Congregation

Sometimes I feel depressed, because when you look out in the congregation and see so few people and yet the people who come here are very active. You know, we're not dying. You need to tell people, when they say that, they're all living, as far as I can tell!

In fact, the church is beginning to reinvent itself. Recently, the congregation voted unanimously to become an open and affirming church, part of a process of redefining their mission. They've also just learned that they are the beneficiaries of a life insurance policy that will bring them a large financial windfall.

Through it all, the handbell choir will continue rehearsing every Thursday, just as they've always done.

This week, we're getting ready to play an arrangement of the hymn tune, "Ah, Holy Jesus." A few of the handbells are in need of new handles and other minor repairs, which is to be expected after half a century in the basement.

When these bells make their 21st century debut in the fall, Wyke, Hyneman and I will all be there.