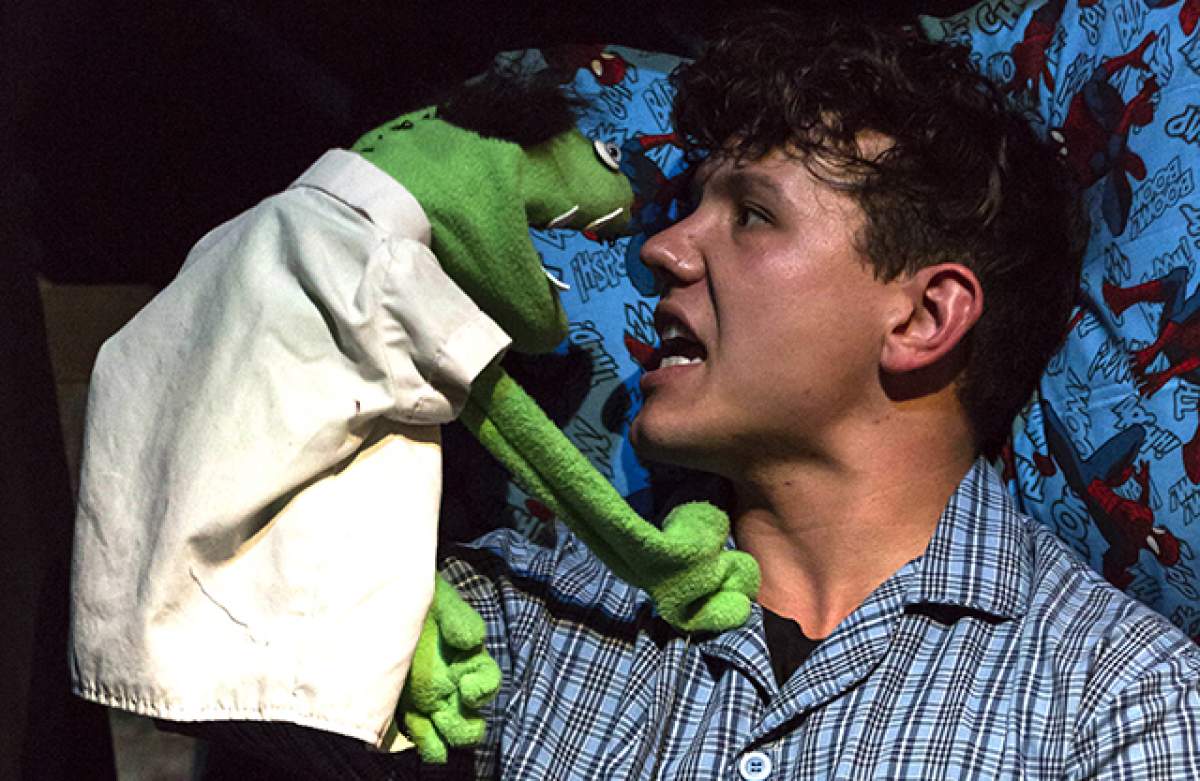 Indianapolis' Phoenix Theatre is presenting Robert Askins' Hand to God. The setting is a small Texas church where children are rehearsing a puppet play. Playwright Askins works as a bar tender in Brooklyn, but he grew up in a small Texas town performing in church puppet plays staged by his mother. Although his puppets sound more like George Carlin than Sesame Street, he knows the territory. Hand to God is a darkly funny wild ride.

Angela Plank plays the harried director Margery. Margery's husband has just recently committed suicide by the novel method of eating himself to death. Nathan Robins plays the part of her son Jason. He's basically a teen who's trying to be good. Jaddy Ciucci is his friend and see saw partner Jessica. Adam Tran is Timothy, a rebellious teen with a thing for Margery. Paul Nicely, Pastor Greg is trying to use the puppet theatre as therapy for Margery and as an outlet for Timothy.

Hand to God is neatly plotted and staged with nicely drawn characters. Initially, it's a tenuously balanced situation. Then, Jason's puppet, Tyrone starts to take over. Nathan Robins very skillfully portrays his struggles as Jason fights the tyranny of the foul mouthed Tyrone.  The violent Tyrone actually attacks and bites off part of Timothy's ear.  In another scene, the sexy  Tyrone and Jaddy Ciucci's puppet go through at least the first sixteen pages of the Kama Sutra. Aided by Laura Glover's red lighting and Ben Dobler's wild sounds, Tyrone later puts on a pretty good show as a very devil possessed figure. He's one scary puppet.

As the Hand to God closes an uneasy truce seems to fall over the set, but Tyrone still gets the last words with a chilling mystery laden religious rant of a final speech.

Mark Routhier directs Hand to God with considerable help from fight choreographer Scott Russell. Bernie Killian's neat sets rotate for the three scenes and take quite a beating during the performance. Patrick Weigand is the puppet designer. Costumes are by Emily MdGee.