Guy and Dolls: "It's The Real Phedinkus" 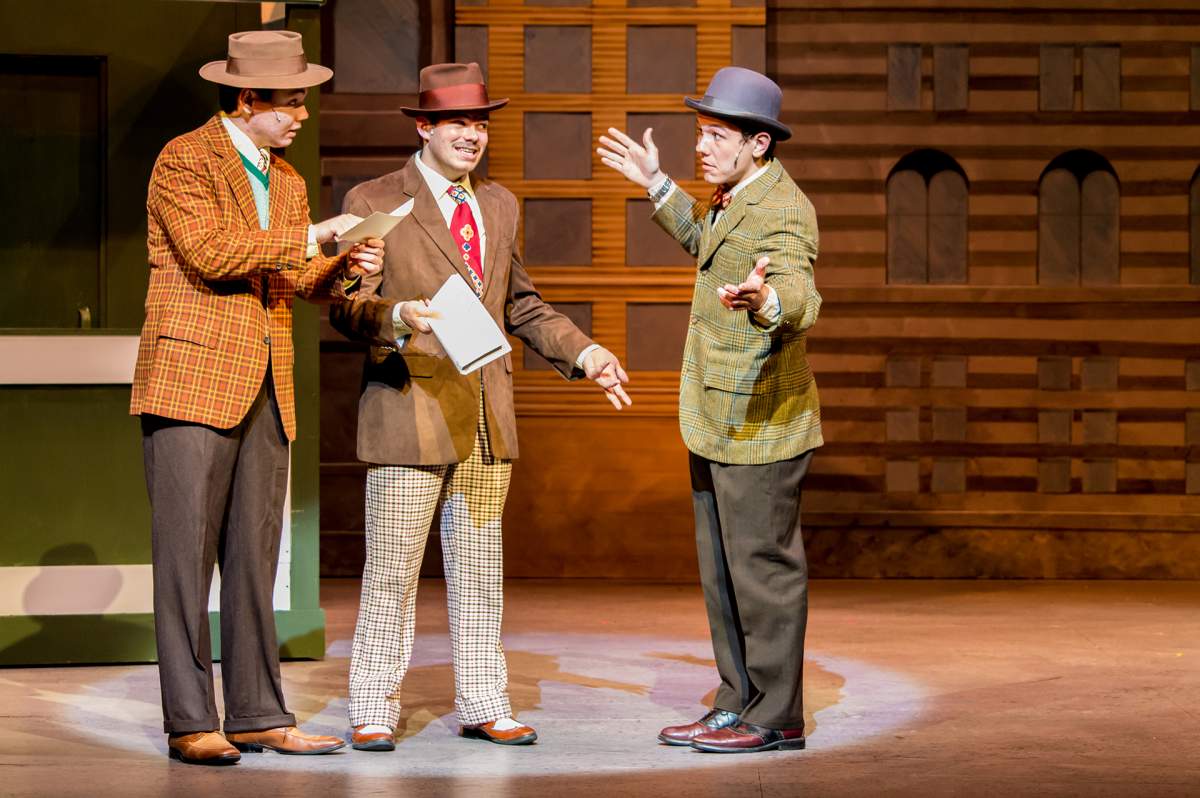 The IU Department of Theatre, Drama and Contemporary Dance brings the wonderful world of Damon Runyon's New York in the musical Guys and Dolls to the Ruth N. Halls Theatre. It's a terrific production of a great show. To use Runyon's own words about love, "it's the real phedinkus."  I'm so sure that it will sell out that I'd suggest that if  you would like "a piece of the action," stop listening and put your "marker out" for tickets now.

­Guys and Dolls is based around two love stories. Sky Masterson, Joey Birchler, a committed bachelor and dice roller extraordinaire falls for Sarah Brown, Meghan Goodman, a woman committed to the single life and her role as a missionary. Nathan Detroit, Markus McClain, the organizer of the crap game that has brought Sky to town is actually engaged to the singer Miss Adelaide, Kaitlyn Smith. However, Nathan's  engagement to Miss Adelaide has  been going on for fourteen years and seems even less likely than the affairs of Sky and Sarah to end in marriage.

Birchler offers a  strong singing and  thoughtful portrayal of the smitten Sky that's  aptly partnered by the vocal work of Goodman who also shows us a bit of the depth of her character and commitments. In their first duet "I'll Know," Goodman strays into operatic territory, but for the rest of the show sings solidly in the musical vein.

Markus McClain is a delight as the worried proprietor of the perpetually beleaguered crap game and the equally worried perpetual fiancée of Miss Adelaide. In a strong show with fine acting, singing and dancing, Kaitlyn Smith's as the affianced Adelaide is the star. Her hopes become our hopes, her woes our woes. We may even find that we're pulling out a tissue for a sneeze of our own in response to one of hers.

Nathan Robbins is an articulate and very appealing member of cast as Nicely, Nicely Johnson. His athletic rendition of the gospel tinged "Sit Down, You're Rocking the Boat" with the aid of the whole company was a hit in a show of hits. The balance in his partnering with Christian Fary and Zach Decker  in their opening "Fugue for Tinhorns" was off Saturday night, but I'll bet it'll be better as the week goes on.

Director Lee Cromwell and choreographer Lisa Gennaro are clearly in close partnership. There's wonderful complexity in the opening, sneakily evil Runyonland with hookers, hooking; pickpockets, picking; assailants, assailing, and grifters, grifting. It's lovingly balanced in the equally complex closing scene where all is peace, good will and harmony. In between there are the grin producing dances of Miss Adelaide and her Hot Box Girls both in the gingham of "Bushel and a Peck," and the faux fur of "Take Back Your Mink" and the tense athleticism of the "Crapshooters Ballet."

Lauren Ayn Lusk's set design neatly offers an almost cartoonlike feel with squashed perspectives and a mix of reality and fantasy along with some mechanical and some nearly magic changes in perspective and location all supported by Derek Jones light design. Johna Sewell's wonderfully exaggerated costumes are each a visual expression of the character they clothe. Sure musical direction is in the hands of Terry LaBolt.

The IU Department of Theatre, Drama and Contemporary Dance's production of Guys and Dolls plays April 18. 19 and 22-26.

And, as I said at the beginning  it's "the real phedinkus."