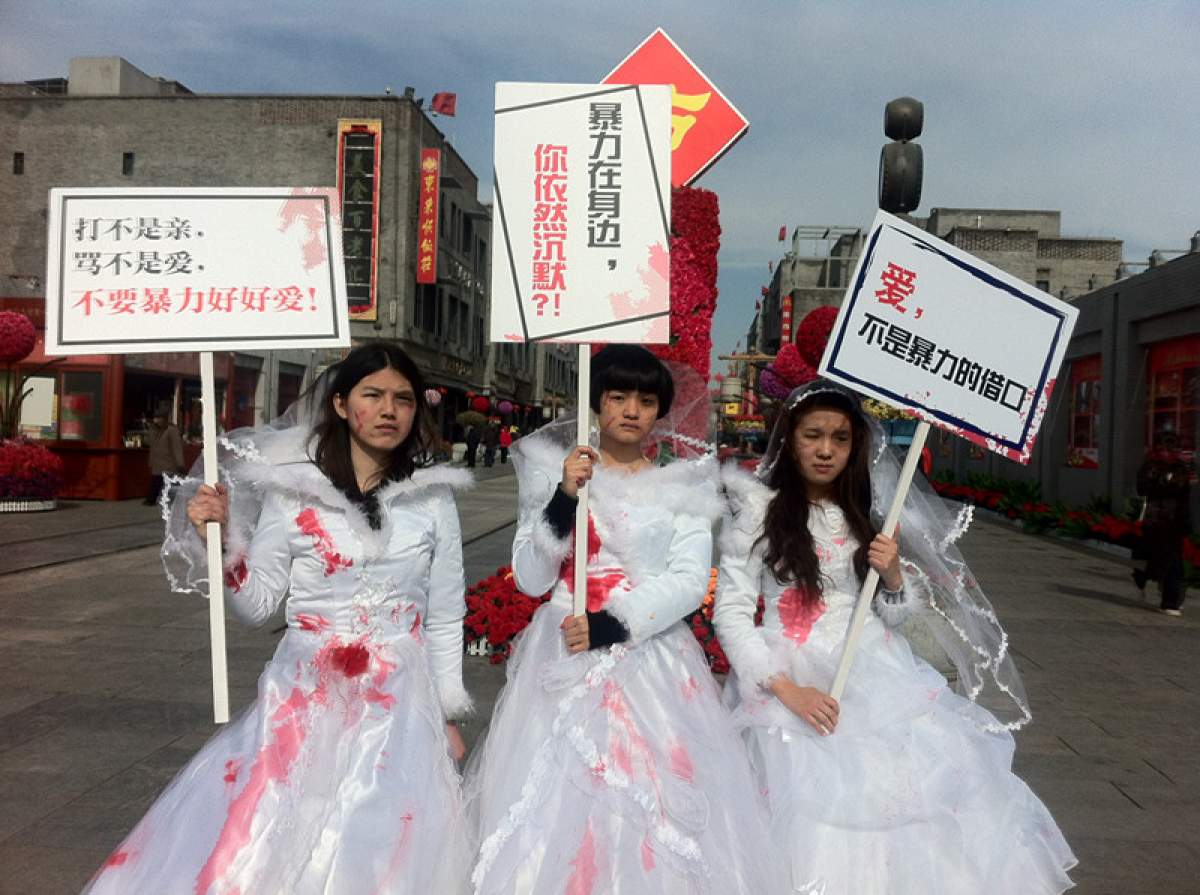 Feminism provides sanity and solidarity for Chinese women, says Chinese activist LÃ¼ Pin, who spoke at a roundtable discussion about feminism in China on February 3.

The discussion was as a part of "Above Ground: 40 Moments of Transformation," an exhibition of photographs documenting young feminist activism in China. Pin first organized the exhibition in fall of 2015 at the The Clemente Soto Velez Cultural & Educational Center in New York City, before bringing it to Indiana University. The exhibition is part of China Remixed, an arts and humanities festival on the Bloomington campus.

The photographs in the exhibition pictureÂ the resistance of a new generation of Chinese women, who have formed groups, such as Young Feminist Activism, thatÂ stage street theater and coordinate public protests to spread messages of gender equality in China.

"These are women who are in college, recent university graduates, into their young thirties," says Sara Friedman, an IUÂ professor of Gender Studies and Anthropology who moderated the discussion. Friedman says that the feminists featured in the exhibition use provocative demonstrations to engage the public on a number of different issues.

Several of the photographs in the exhibition document the first anti-domestic violence protest led by Young Feminist Activism on February 14, 2012. One picture, entitled "Bloody Brides," depicts three young women standing in the business district of Beijing. Their faces are solemn and covered in fake bruises, and the white wedding dresses they wear are splattered with fake blood. The women hold signs reading, "Equality, then harmony," "Violence doesn't belong to this region," and "Violence, are you still silent?"

Another issue Chinese feminists address is sexual harassment. Five women - called the Feminist Five - decided to protest this issue on March 7, 2015. The demonstration did not go as planned, though.

"On the eve of International Women's day, they were arrested and all five were taken to Beijing and kept under arrest for 37 days," Â Friedman says. "There was a very concerted outcry of support from feminists around the world."

A photograph in the exhibition shows women in Guangzhou, China Â standing in a crosswalk. They wear masks printed with the images of each member of the Feminist Five: Wu Rongrong, Zheng Churan, Wang Man, Wei Tinting, and Li Tinting. This message of solidarity was to advocate for the release of the Feminist Five. Despite the women's eventual release, Friedman says that this case shows the increasing difficulty for women to stage public protests.

"I think at the current moment, people might be pessimistic," Friedman says. Still, Friedman saysÂ that the photography in the exhibition is a sign that Chinese women will continue to resist.

At the roundtable discussion, exhibition curator Pin was joined by other Chinese feminists to discuss the exhibition and the future of the Chinese feminist movement, including Wang Zheng, a professor of Women's Studies and History at the University of Michigan, and Â Duan Jiling, a Ph.D. candidate at IU. The photographs in the exhibition are not just important for the Chinese public to view, the panelists concurred, but for Americans to view as well.

"The outside world should learn more about our story," Pin says.