Greta: She's Far From Settled Down 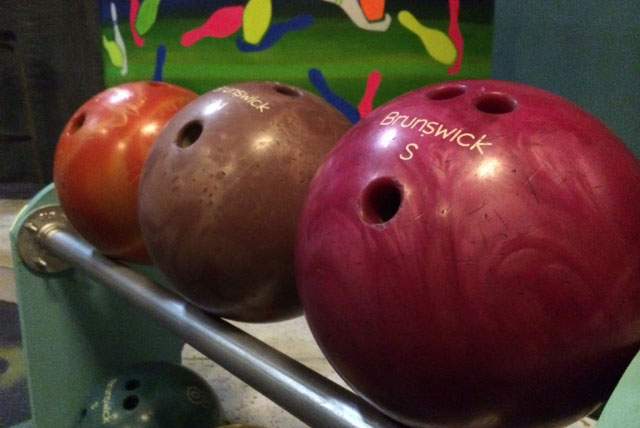 Greta is a lively musical about love, commitment and second comings of age for people in their mid-twenties.  It's also a story about two couples.

Greta, Kaitlyn Mayse, has nice life for a twenty-seven year old. She's a success at running a family bowling alley for her grandmother. She has lots of friends. She has a steady relationship with a Jason, Nat Zagree, a boy  that she loves. She also has an itch to leave it all behind and go to medical school.

Meanwhile a pair of long coupled gay friends, Nick and Michael, Nathan Robbins and Julian Ramos are also at a tense point. They're coming to their tenth anniversary. It should be a happy time, but Michael thinks that Nathan is taking him for granted and Nathan is just a bit too dense to quite understand.

By the end of the first act of Greta, I was actively hoping that Greta would be a bit more self-assertive, break up with Jason,  get out of the bowling alley business and go to med' school . And I was hoping that Nathan would get a bit smarter and that he and Michael could get back together.

Greta is a comedy and in a series of twists and turns, some expected most unexpected, things do work out.

Emily Goodson and Jeremy Schonfeld's Greta  began its life as Kissing Frogs three years ago in a joint BPP-IU collaboration. It's a real pleasure to see it return with a stronger story line, more fleshed out characters, better songs and more dramatic moments.

Kailyn Mayse is quite precious as the dutiful Greta. Nat Zagree is a bit doleful, but loyal as Greta's loyal boyfriend, Jason. As the gay couple,  Nathan Robbins is quite perfect as the sunny but dense Nick. Julian Ramos is a charmer as his graceful partner Michael.

Hannah Slabaugh is a trip as Greta's adventurous friend  Annie. Nick Porcoraro is a fascinating character as Annie's  ever resourceful, ever mysterious Tod and several other past and present figures.   Emily Kelly nicely filled the role of Greta's grandmother and all the rest of the extra female characters.

The production of Greta is directed by Chad Rabinovitz with energetic cheer leader style choreography by Abby Bartish. The very realistic bowling alley set that lights up in different colors ranging from red through the spectrum to ultra violet is by David Wade aided by lighting designer Lee Burckes. Bringing it all together and leading the instrumental trio is music director Eric Anderson, Jr.

Greta at the Bloomington Playwrights Project plays through May 31. A word to the wise, tickets are already becoming scarce.