The Graphics Of Revolution And War: Iranian Poster Arts 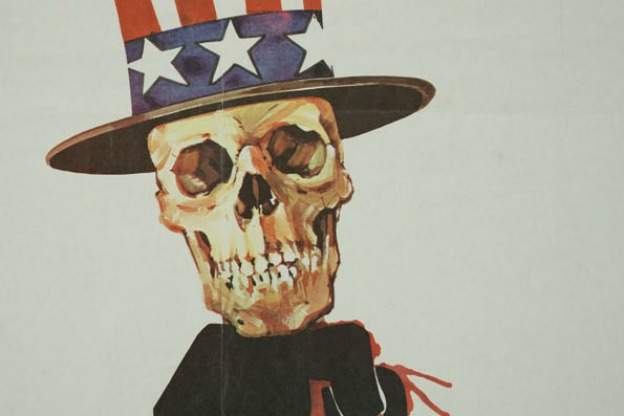 A suite of talks, performances, and exhibitions tackles the subject Making War Making Peace this fall on the Indiana University-Bloomington campus. As part of this Themester of coordinated programming, the IU Art Museum is hosting a show of Iranian posters of the Islamic Revolution and the Iran-Iraq War.

This selection of images on loan from the University of Chicago show just how mighty visual imagery can be in conveying political agendas. Curated by Christiane Gruber, Associate Professor of Islamic Art at the University of Michigan, these ephemeral artifacts offer a view of recent history that will seem unfamiliar and, quite possibly, shocking to an American audience .

One stark image, issued only two months into the Iran hostage crisis, depicts a skull-faced Uncle Sam being strangled by a black fist that has risen from a pyramid of fists. Blood is spurting copiously through the strangling fingers. Gruber interprets the poster, issued in January of 1980 for a conference that was held in Tehran for international liberation movements

After the revolution, Iran saw itself as at the helm of third world, or developing world liberation movements, that positioned itself against American hegemony. So what you see here is that positioning of the Islamic republic as at the head of a growing pile of fists.

With the Shah out of the picture, attention turned towards the United States considered the real power behind the Pahlavi monarchy and still resented by Iranians for the 1953 CIA-led coup d'état that overthrew the democratically elected prime minister and installed a puppet ruler.

So, while the American public was tying on yellow ribbons to bring the hostages home, the radical Islamic movement was gaining traction through such images as this grisly poster, which were being protected and collected in Iranian embassies around the world for propaganda purposes.

The likelihood of seeing these artifacts in an American museum 30 years later was slim.

Only two institutions in the US have post-revolutionary Iranian posters: the Hoover Institution at Stanford, and the Special Collections Research Center of the University of Chicago Library. "There used to be a collection of these in the collection of contemporary art in Tehran," Gruber notes, "but the last I heard they were considered to be ephemeral, and were deaccessioned."

Ephemeral or not, a number of the posters evince a deep connection to iconographic traditions in Persian art. While the skull-faced Uncle Sam poster uses a stripped-down, modernist aesthetic to convey its theme, other examples in the show rely on a more descriptive style born of storytelling.

One poster on view reflects the coffeehouse stylereminiscent of the canvases brought in to cafes by 19th-century storytellers for the purpose of recounting the stories illustrated by various vignettes as a form of evening entertainment.

The show's "coffeehouse" poster unfurls the story of the Revolution from the toppling of the Shah's statue and the parading of demonstrators with the very posters exhibited here, to the burning of Cinema Rex, and the flight of the Shah across the Persian Gulf. While the Shah is represented as a demonic figure, the Ayatollah Khomeini, who was not actually present during the events depicted, is shown presiding over the scene as a celestial figure.

"This is an apocalyptic, cosmic battle of good versus evil," Gruber explains, "but all of it is woven into historic events that didn't have those tropes embedded in them initially. It was a social democratic revolution that became Islamized through a wide range of discursive and visual tools."