The Raging Grannies: Not Your Grandmother's Protest Songs 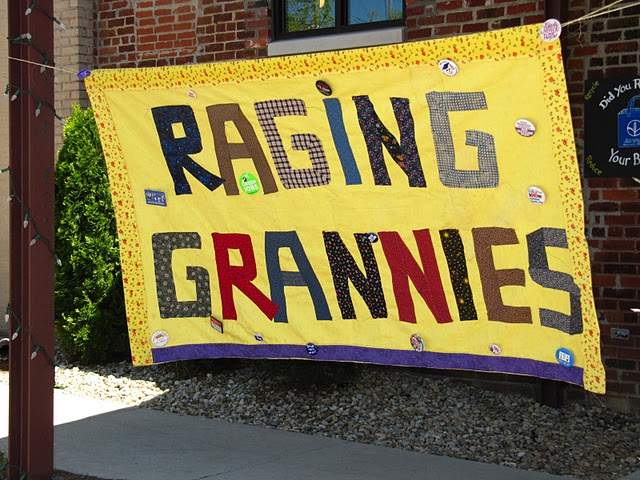 It's been said that "well-behaved women rarely make history." In Bloomington, Indiana, a group of women 'of a certain age' is putting that adage to the test,Â upending notions about 'little old ladies' and the traditional American songbook as they sing for global justice.

While imploding the traditional songbook, the Grannies also do a number on the persona of the little old lady, performing in aprons and shawls, toting rolling pins and laundry baskets.

This One's For Fidel

It's a mid-summer evening.Â The Hoosier Raging Grannies have donned their multi-colored aprons and flowered hats for a pitch-in at the Unitarian Church,Â where they areÂ helping to host the Pastors for Peace Friendshipment Caravan to Cuba as it passes through town. The caravan challenges the US trade and travel blockade of Cuba by delivering humanitarian aid to the island nation, and raising awareness along the way. It's an appropriate venue; Bloomington hasÂ been a sister cityÂ to Santa Clara, Cuba for over a decade.

The gathering of community activists and caravanistas is complemented by a choral protestÂ by The Raging Grannies.Â They offer up a tailor-made number sung to the tune of "My Bonnie Lies Over The Ocean:"

It's been 51 years that our government


Tried to kick out old Fidel.

But the Cubans are proud, brave, and fearless,

Cuba is not the Grannies' only cause cÃ©lÃ¨bre. They sing for peace andÂ they singÂ against war, adapting show tunes, folk songs, and standards to lyrics that protest racial profiling, torture, and corporate fraud.

Part Of A Whole

Bloomington's granny band is an offshoot of a larger movement.Â It started in Canada in 1987, whenÂ a group of women in their 50s and 60s came out to protest the nukes onboard US Navy ships stationed around Victoria, British Columbia, where they lived. Within time, granny-ing went global, after a fashion.

Cynthia Roberts Hall encountered the Grannies at aÂ conference for the Women's International League for Peace and Freedom (WILPF) in the '90s. "I thought, that's great," Hall recalls,Â "but I don't really sing." ** After working up her nerve to join in when the Grannies performed at another WILPF conference in 2008, Hall was inspired to bring the concept back to Bloomington.

A Song For Any Cause

The Hoosier Raging Grannies have shown up to supportÂ a variety of causes, includingÂ Hoosiers for a Commonsense Health Plan and theÂ Bloomington Coalition to Abolish the Death Penalty. They've serenaded taxpayers at the post office to raise awareness about defense spending;Â they've joined voices withÂ the crowd that gathered outside of a city council meeting on homelessness.

"Expressing your activism through song ," said Hall, "is a great way to do it."

**It should be notedÂ that according to theÂ website of Raging Grannies International, in addition to "a sense of humour and a willingness to make noise," grannies must possess "no singing ability."