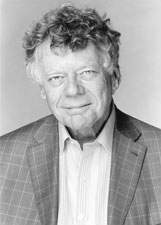 Honored as an Outstanding American Composer at the John F. Kennedy Center for the Performing Arts in 1986, Gordon Getty maintains a prolific career as a composer in addition to his continuous support of the arts through the Gordon and Ann Getty Foundation.

Known primarily for his vocal works, Getty's compositions are heavily inspired by nineteenth and early-twentieth poetic texts.  Two of his most frequently performed works are The White Election (1981), a song cycle on the poems of Emily Dickinson, and the opera Plump Jack, which was premiered by the San Francisco Symphony in 1984.  Other compositions include works for solo piano, chamber ensembles and orchestra.

Many of his works can be found on the PentaTone label and have been recorded by the Munich Radio Orchestra, Academy of St. Martin-in-the-Fields, Russian National Orchestra, and the San Francisco Symphony.  His most recent release is the opera Usher House (2013).  Derived from Edgar Allan Poe's "The Fall of the House of Usher," the recording features vocalists Christian Elsner, Etienne Dupuis, Phillip Ens, Lisa Delan, and special guest Benedict Cumberbatch.

WFIU will feature music of Gordon Getty in our classical music programming throughout the month of August.