But They're Good Kids! 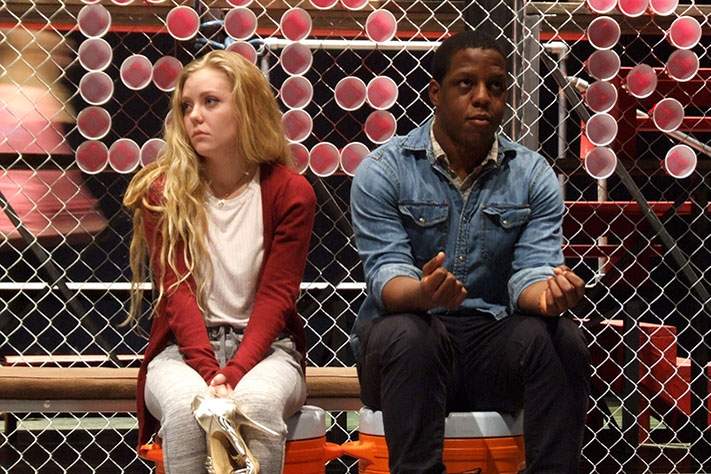 Good Kids is the title and it's a phrase that's on every character's lips in Naomi Iizuka's play at IU's Well-Metz Theatre. It's based on the true story of a rape after a drunken party that put two Ohio high school players in jail and indicted a football crazed community.

Iizuka artfully paints the picture of four players as varied excuses for local heroes and the women as nervous acolytes of the community's fixation on the team. Jonathan Michaelsen's inventive and varied staging for a strong assured cast thrusts the action right into the middle of the audience for a close up performance.

From time to time wheel chair bound, facially scarred Dierdre, Ashley Dillard, rolls in as a sort of stage manager. Sometimes she comments. Sometimes she rolls the action back for a different take or even a different version of a scene. At one point Good Kids contrasts the Eden like past when people talked on phones and made dates instead of taking pictures, texting and "hooking up."

Chloe, Erin Logan and her friend Daphne, Katie Clarke, are a couple of outsiders come to visit Chloe's cousin Kylie, Kelsey Carlisle, and to look for a party. Chloe is the only one on stage in a short skirt and high heels. The boys are expressing rude interest in this exotic outsider and the girls are cattily jealous. Both reactions are repeated again and again as a defense for what happens.

At the drop in, "hook up," party at Amber, Mandy Wenz's parentless home things get quite out of hand. There's plenty of action in the scene choreographed by Abby Bartish. Chloe is definitely the leading drinker and the leading magnet for the boys. Ty, Ryan Claus, is betting the he can seduce her. Conner, Mauricio Miranda and Landon, Joey Kelly are interested. Tanner, Richkard Saint-Victor is mostly just going along.

There are a couple of versions of how it happened, but Chloe does leave the party, her friend and her cousin in a car with the four guys. The next morning she wakes up in her underwear next to an apologetic Tanner. She can't remember anything from the evening; Tanner tries to reassure her that everything will be OK.

In an earlier era, the one with phones that we talk on and dates that we go on, this might be where the story ends. But the guys took pictures and shot videos of their proud sexual abusing of Chloe and they've posted them all around their circle at school. It might have stopped here, but Good Kids' one lonely outsider Skyler, Jenny McPherson, calls 911.

There's a rush from all involved to delete the texts, the Facebook posting and the video. Local authorities, including Joey Kelly as the coach, suggest that these are good guys and boys will be boys. There are snap shots as individual actors play their own parents denying the importance of the event, and generally blame the victim. Lindsey Zecherle as the tall tough athletic Madison says that she couldn't be so victimized. Melanie McNulty, as Brianna a more thoughtful girl, says it could happen and that she's working two part time jobs to leave the town.

Now, this whole thing might have simply disappeared with the erasing of the incriminating data and the town's denial, but our wheel chair bound stage manager holds a long festering grudge about things like this and enough skill with a computer to retrieve the pictures, the tweets, the video, to repost them and they go viral

The town, the players, Chloe are on all the networks and the phrase but these are "good kids" is repeated from coast to coast. With this kind of pressure, law enforcement does act. Two of the football players are convicted and do jail time. One later rejoins the team.

All through Good Kids the word "story" has been beaten about. Again and again, we hear: "There's two sides to a story; that's not the whole story; that's just what he said; and it's not true." As the play looks back on the events of the day, the evening, the night and the morning and days after characters reflect just a bit on how the story is of them. There's a bit of reflection even in confused denial and a hope for a bright story of a future them.

Naomi Iizuka's Good Kids is the first play commissioned by The Big Ten Theatre Consortium's New Play Initiative. It opened at the University of Michigan in October. This spring in addition to IU there will be productions at Iowa, Wisconsin, Maryland and Purdue.

Performances in the Wells-Metz Theatre continue this Tuesday through Saturday, Feb 10-14.There will be thoughtful panel discussions following most performances.