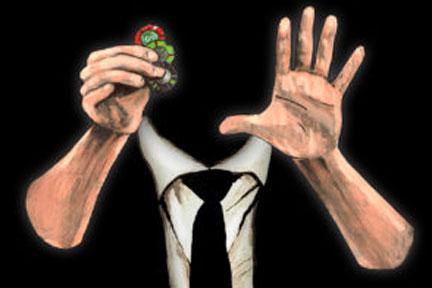 I'm George Walker for WFIU Arts. The Bloomington Playwrights project is hosting magician Simon Coronel in a show titled Glitches in Reality. I should tell you that I love magicians; coin and card sharps, prestidigitators of all stripes, escape artists, and even show folk who saw people in half. When other mothers were hiring balloon animal making clowns for kids birthday parties, my wife brought in a story teller for our son and a magician for me.

Australian born Simon Coronel at the BPP is a more than worthy member of the fraternity. Coronel spins the evening's tricks around his own life story richly mixed in with amazing stunts. Prior to his appearance assistant stage manager Aliyah Darling was busy distributing, coins, rope, poker chips, a mini Rubik's cube, a can of corn chips and other props to willing audience members. Audience participation is very much a part of Coronel's show.

As a youth in Australia, Coronel described himself as a talentless, introverted young man who discovered a campus magic group only as a sophomore, but it lit the fire. He simply couldn't get enough of this new area of interest. My fingers are still a little sore from trying some of the stretches he told us he worked at for hours and hours in order to be able to do sleight of hand magic. While he described his efforts he took us through one mystifying moment after another with the props supplied by his volunteers.

Coronel is a warmly informative story teller and he treated us to some of his adventures. He's especially proud that he actually fooled Penn and Teller on their TV show. And he's even more proud that it was months after his first appearance that one of the duo realized that he'd actually done a coin trick in a way that neither of the hosts had seen before.

At one point in Glitches our host invited us to identify as people who simply wanted to be amazed or who wanted to figure out how a trick was done. A teen ager from the crowd said that being amazed was what he had come for. By the way, there were more young people in the audience than usual for a BPP show and this one suits all ages. Coronel proceeded to a neat rope trick. He did the trick in full view of all of us in the audience but out of sight of the teen. It was done with a lovely sense of fun and the spirit of camaraderie that characterized the whole evening.

Another story Coronel shared told of his efforts to get to compete in an international magic show in Beijing. A Swine Flu epidemic was feared and he had just a little fever. Fearing that he might be quarantined after the flight, Coronel actually took a potentially stomach damaging dose of non-steroidal anti-inflammatories. He was happy to say that they worked to get him into the competition and to come back a winner.

There were several finales for the evening but a crowd favorite was a card trick that we all got to try. Earlier Coronel had told us that when he joined the college magic club, he'd selected a modest deuce of clubs as his signature card. Decks of cards were passed out to everyone in the Ted Jones Theatre and we carefully followed Cornel's directions about shuffling, selecting and so on. To the wonder of me, my wife and everyone else, the card we turned up at the end was Coronel's signature that deuce of clubs.

Glitches in Reality at the BPP is directed by Chad Rabinowitz. Shane Cinal had made a very classy stage set and there's a rich curtain back drop. Jeffry Small is the lighting designer and there is a big screen allowing us to focus on some of Coronel's more intricate moves. Bab Steininger was the hard working stage crew. Glitches in Reality plays through October 5. They've added an extra show on Tuesday the 2nd.

At the theatre for you I'm George Walker.