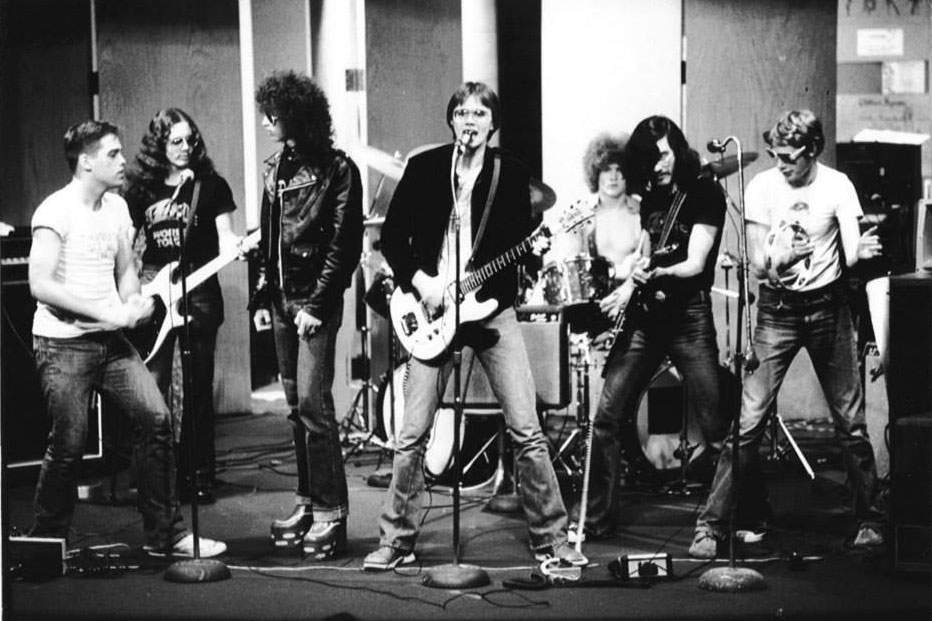 Before the Sex Pistols broke in England, or the Ramones made a name for themselves, the Gizmos were bumming around Bloomington, Ind., trying to revive rock'n'roll's primitive animal with a stripped down, poppy sound that would later be branded punk.

The Gizmos formed in Bloomington in 1976 when a group of rock-fanatic teens joined up to make noise that flew in the face of '70s FM radio.

"I remember us once walking around town tearing down what we identified as hippie flyersâ€¦It was the idea that hippie shit sucks and we need to get back to just basic, raw rock'n'roll," recalls original Gizmo Eddie Flowers. "It was the punk aesthetic, but just earlier."

Kenne Highland and Eddie Flowers discovered a musical kinship while writing for Gulcher, the Bloomington-based rock fanzine. Along with friend Ted Niemiec, they shared a love for the Stooges, the MC5, the New York Dolls and Creem magazine-which would later go on to praise their stylings.

Gulcher was the band's hub and instigator. "People don't understand how important fanzines reallyÂ were before punk happened. It was the way people found each other," says Eddie.

After hearing Kenne's demo tapes, founding editor Bob Richert encouraged him to form a band with Eddie and Ted and record as the Gizmos-a slang term for a social misfit and, as it so happens to be, Kenne's high school nickname.

"One thing that was really noticeable about punk rock was how direct the lyrics were. We wanted basic, raw, direct, sexual music about our own lives."

Christened with a name that perfectly represented the outsider triumphalism of rock'n'roll, the Gizmos set out to make a record for Bob's newly expanded Gulcher Records. Joined by Rich Coffee and his band Cerberus, the Gizmo collective met up at the studio-some meeting for the very first time-for a sound experiment.

"Every song was tuned a different way. And they really weren't tuned to actual notes. That made it sound unique. It was a totally different scale, totally different notes, and open chords would sound like nothing else," remembers Ted.

The songs were written with an intent to provoke, says Eddie. "One thing that was really noticeable about punk rock was how direct the lyrics were. We wanted basic, raw, direct, sexual music about our own lives."

One such song, "Muff Divin' in Wilkie South," memorializes an Indiana University dormitory in its lyrical how-to guide on one of the raunchier aspects of dating etiquette.

The record pressing plant, however, found the music too provocative.

"After reviewing the content of the tapes you sent us, we wish to advise that Queen City Album is a company that wouldn't want to be involved with this type of recording."

"It delayed the EP by two or three months, which in introspect was a drag, because the Ramones were already there when our EP came out. Looking back it was like, â€˜Oh man if only we had gotten it out a little earlier!"

Despite the record's delay and lack of radio hygiene, "Muff Divin' " rose to #8 on the UK alternative charts. In the intervening years, the EP has become a cult collectible, and is rumored to have sold over 500,000 copies.

Following the record's '76 release, the Gizmos went on to do a "World Tour"Â that included two shows, both at the Monroe County library, where John Cougar Mellencamp introduced the band.

Those ended up being the only live performances the original Gizmos ever did. By 1977, Kenne Highland joined the Marines and band members went their separate ways. Despite their short career, the Gizmos' three EPs laid the foundation of Midwestern punk rock and inspired countless bands, including the Panics, the Zero Boys, the Dancing Cigarettes, and even a Gizmos spinoff band.

On June 12, the original Gizmos will return to Bloomington to resume their "World Tour" after 37 years.

"I always wanted to be one of those cult bands that didn't make it, but that you appreciate later on. Now it's finally happening and I'm as happy asâ€¦a Gizmo in Bloomington," says Kenne about the band's upcoming gig at the Bishop.

The Gizmos' Bloomington reunion will be followed by shows in Indianapolis (6/13) and Dayton, Ohio (6/14).

For more information on the band, listen to Ted Niemiec's "Ballad of the Gizmos."