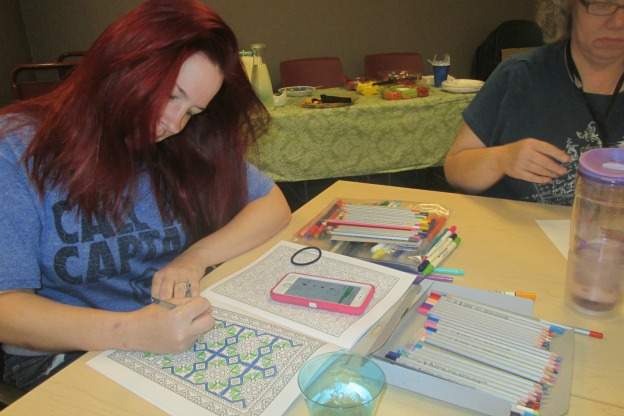 I'll admit it. I've been trying to ignore a recent trend for a while now. You'll notice it when you walk into any big bookstore, right inside the door. Coloring books, of all kinds, for adults, lining the vestibule.

"The first time I heard of adult coloring was about a year and a half ago from my mom," explains Mandy Hussey. "When she initially told me about it, I was kind of like, 'Wow, you're adult coloring,' and she said, 'Well, your brother's girlfriend is adult coloring too,' and I was like, 'Oh, okâ€¦'"

It wasn't long before Hussey, who worked at Indiana University Press at the time, went out on a limb and proposed that the press consider publishing their own adult coloring book.

"The idea popped into my head during a meeting and I kind of just shouted it out, wondering how many people are going to think this is stupid, and how many people are going to be like, 'wow that's cool,' Hussey recalled. "And everybody had the 'wow that's cool' reaction. Nobody said out loud that it was stupid or ridiculous or wouldn't sell or anything along those lines."

Hussey was pleasantly surprised. To put things in context, this is a publisher whose latest titles include Interpretation of Nietzsche's Second Untimely Meditation and Music, Dance, and Mobility in the Lives of Four Ivorian Immigrants. But even a scholarly publisher has to acknowledge the phenomenon that is adult coloring books.

"Last year there were around 12 million adult coloring books sold," Hussey notes, "and the top selling coloring book is at over 2 million copies now."

The IU Press recognized an opportunity, and a niche market.

"We noticed that there were no other universities that had done this," Mueller recalls, "and we just thought, we might as well go for it."

Published in July, Color Your Campus-Indiana University, illustrated by Melissa Mueller, represents the press's maiden voyage into the bustling world of adult coloring. Â A second title in the series, Color Me Michigan, will be publishes in late 2016.

Many Shades Of Zen

"So we've got all kinds of markers, crayons, colored pencils, all kinds you can think of, all kinds of adult coloring books, we've even got bookmarks you can color," explains Elizabeth Gray, community engagement librarian at the Monroe County Public Library. Â On this Sunday afternoon in June, Gray is leading a program called "Many Shades of Zen: Coloring for Adults."

There was calming music in the background along with refreshments. Â The librarian estimated that so far, about fifteen people had shown up, which she counted as a success.

And as it turns out, the Monroe County Public Library is just one place among several in the area where you can socialize and color. The Bloomfield Public Library holds its own program, and Lucky's grocery store has offered one. And every Tuesday night, just a few blocks from the library, the Back Door bar in Bloomington holds its own coloring session.

"Every Tuesday we have Drink and Draw," explains Brick Daniel Kyle, a bartender and marketer at the Back Door. "Drink specials and lots of free coloring supplies. Tuesdays have always been a little soft for us, so getting a little community engagement, getting people involved in art. And since this is a queer art bar, we just thought it would work."

"Sometimes we'll have eight to ten people in here," Kyle notes. "It just depends on people's moods I guess. You kind of have to want to come to a bar and color."

Granted, this isn't your pre-schooler's coloring. The books the Back Door provides put the "adult" in "adult coloring."

"We have gay hipster books, genital coloring bookswe try to get pretty tongue-in-cheek with it," concedes Kyle.

What Color Is Your Parachute?

Clearly, we're a long way from My Little Pony and Raggedy Ann. Coloring books that would be wildly inappropriate for the traditional coloring set are all the rage now.

"The top four selling adult coloring books are all these swear word coloring books," explains Hussey. Â "I can't tell you the names of them, butÂ there are some stars and asterisks..."

Not all of the coloring books designed for adults are off-color, but they are wide-ranging in terms of content. Whatever you're interested in, it seems, there's coloring book for you. Design-oriented books, showcasingÂ Mandalas and Celtic knots were popular at first. Â Â And now there's a coloring book for those who love IU.

The book includes the big landmarks-Sample Gates, the Well House, and Showalter Fountain, among others. The structures are recognizable, but are elaborated with surface pattern and whimsical background elements. The Kirkwood Observatory, for example, is surrounded by a swirling starry night. Instead of a monolith, the Wells Library is a fascinating study in stacked limestone.

"I really wanted to create designs, depending on what picture you choose or what mood you're in," explains illustrator Melissa Mueller, "that you can just make your own, and have fun coloring in."

The coloring book pages are a lot of fun. With their biomorphic patterns and integration of positive and negative space, Some of Mueller's drawings remind me of psychedelic posters from the 60s, for The Jefferson Airplane and Strawberry Alarm Clock.

Still, I'm dubious. Has the entire Hoosier Nation suddenly taken up coloring in their spare time?

"It's really all about relaxation," offers book concept originator Mandy Hussey. Â "The target audience for adult coloring books is supposedly people in their twenties and thirties. Young adults walk around with their phones. They stare at them all day long, but when they get home, they want to set down that phone and pick up a pencil."

Keep Calm and Color On

"It's always been calming for me" explains Kim Zeller, whoÂ came to the library's Sunday afternoon coloring program. "I have a lot of stress, so I have a lot of coloring books."

"Sometimes I do some crafts, just anything calming," she explaings. "I don't really view myself as creative. It's just a great stress reliever for me."

For Elizabeth Gray, it's a way to be creative without having special skills.

"I'm not really a great artist," she explains, Â "so this is the perfect thing for me to do because I can create without having to worry about being perfect, and it gives me an outlet."

"I'm away from the house and the kids," explained Sherry, another participant. 'Don't get to do that very often."

Maybe sheÂ could sit down on the floor with her grandkidsÂ and color, I suggested.

"Well, it's just not the same," Sherry suggested. 'The five-year-old, my granddaughter, she doesn't want to stick with it for very long. This takes time, to color like this."

What Sherry was saying was remarkable. Not only are adults borrowing from the toy closet, it seems, they're suggesting this toy might be better suited for their own purposes than those of their children. What's more, grown-ups are changing the rules!

"With the pre-school notion of stay between the lines, that's not something that you have to do here,' Hussey suggests. "Why couldn't you draw the sky pink if that's what you wanted it to be?"

Even if adults are coloring their own way, still, what does it say about our culture that so many people are turning toward an activity that is usually abandoned with sippy cups and training wheels?

But why might coloring be the activity that promotes relaxation, and coping? Why not go bowling, or adopt a dog?

"The art-making process evokes a psychic and a biological equilibrium that artists have understood and explained since the beginning of time," King avers.

But art has long been roped off, as the domain of the few.

"I would say ninety-five per cent of the time if you ask somebody to make something they'll say, 'I can't draw. I draw stick figures,'" King notes. "That's pretty much how our school systems have raised us."

Are the benefits of the art-making process, then, off-limits to those who don't identify as artistic?

"We all have the capacity for high level creative thinking and being and expression," asserts King.

I don't think that many people are very confident in their skills of creativity and I don't think that we are trained or educated in the many ways that creativity takes place or can look. So I think picking up a coloring book is an accessible way to feel like you are doing something artistic. And doing something artistic and making something makes us feel better. Just to have some kind of a statement-maybe not on a conscious levelthat we actually exist. And that we are here to do something of meaning in the world, I think at a very deep rooted level, is very important to us.

Maybe coloring can-on some subconscious level-give us the sense that we exist. Over at the Back Door, Brick the bartender takes it a little less seriously

"It's just using your hands for creative purposes; it's not necessarily art. Â But it's fun, and it gets your creative juices flowing, especially when drinking."

During Parents' Weekend at IUSeptember 23rd through the 25thwall-sized illustrations from Color Your Campus will be on display at the Indiana Memorial Union, so that students and parents passing by can color them in. And the press is holding an online coloring contest that weekend on theirÂ Facebook page and on Twitter with the hashtag #ColorIU. Two winners will be chosen. The second book in the IU Press series-Color Me Michigan-comes out in late 2016.