An Unusual Home Studio That Launched Many Careers

By James Gray and Josh Brewer 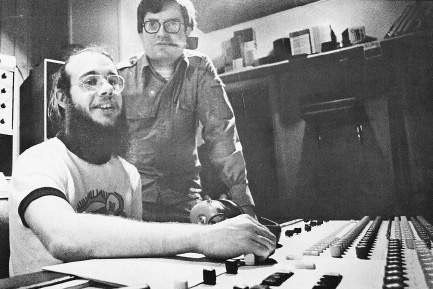 Mark Hood is a professor of audio engineering at Indiana University, and he owns Echo Park Studios.

He's worked with big stars like George Benson, James Taylor, and Bob Dylan, but before that he worked with Jack Gilfoy, a passionate audio engineer and educator with an unusual studio space.

Hood and his friends  traveled to Bloomington, Indiana from Michigan in 1972. They were visiting to record an album at Gilfoy Sound Studios, but when they pulled up to a suburban house, they were confused.

The house was in Matlock Heights, a quiet neighborhood. The homes were 50's-style ranch houses with limestone facades. Hood remembers thinking, "from the outside it was like, were going into someone's garage to record? But, then you get inside [there was] as big a console I had ever seen at that point, and a giant tape machine and really great speakers and actually a lot of great microphones."

The head of the studio, and the homeowner, Jack Gilfoy worked as the touring drummer for Henry Mancini. Yet in the early 1970s, he had converted his two-car garage into a professional recording studio and taught audio recording seminars.

It had been Gilfoy's dream to record a big band. So, he made it happen. With Hood as the audio engineer on many of these projects, bandleaders Al Cobine and David Baker would come record in Gilfoy's garage studios.

There would be a lot of people at the house. Hood said a big band session could have had, "five saxophones, four trombones, four trumpets, piano, bass drums, guitar, band leaders…groupies, hanger-oners... People just parked all over the lawn and the neighbors would just get angry when we had big sessions, because we really didn't have parking organized well at all."

The son of teachers, Gilfoy's parents were teachers. And as much as he wanted to record albums, he wanted to teach and facilitate a place for learning. When Hood joined Gilfoy Studios, he was a college dropout. But within his first year, Gilfoy had him teaching tenured professors audio recording.

Gilfoy lived in the house with his wife and two children, and Hood practically joined the family. "I was 20 years old," Hood said, "and really hadn't learned how to cook yet, so they fed me a lot; I would hang out for dinner. And then, we would actually listen to records a lot. So, if I didn't have a session after dinner then Jack and I would sit down in front of his speakers...and I remembered we listened to the first Yes record when it came out."

Moving into the Future

In the following years, the studio moved, Hood started a record label, and many of Gilfoy's students moved on to successful careers. By the late 70s, Jack closed Gilfoy Sound Studios.

In 1993, Mark Hood started Echo Park Recording Studios with Mike Wanchick, who had also learned recording at Gilfoy's. One of their first clients was Jack Gilfoy. He wanted them to record his jazz band playing at the Jazz Kitchen in Indianapolis.

This job had a special significance for Hood. He remembered, "We just had such a great time. We drank a little bourbon, you know. Then, he came down and we edited it together...He'd seen my career from 1972 to 20 years later owning my own studio and watching us succeed and do that. I think he took a lot of pride in that."