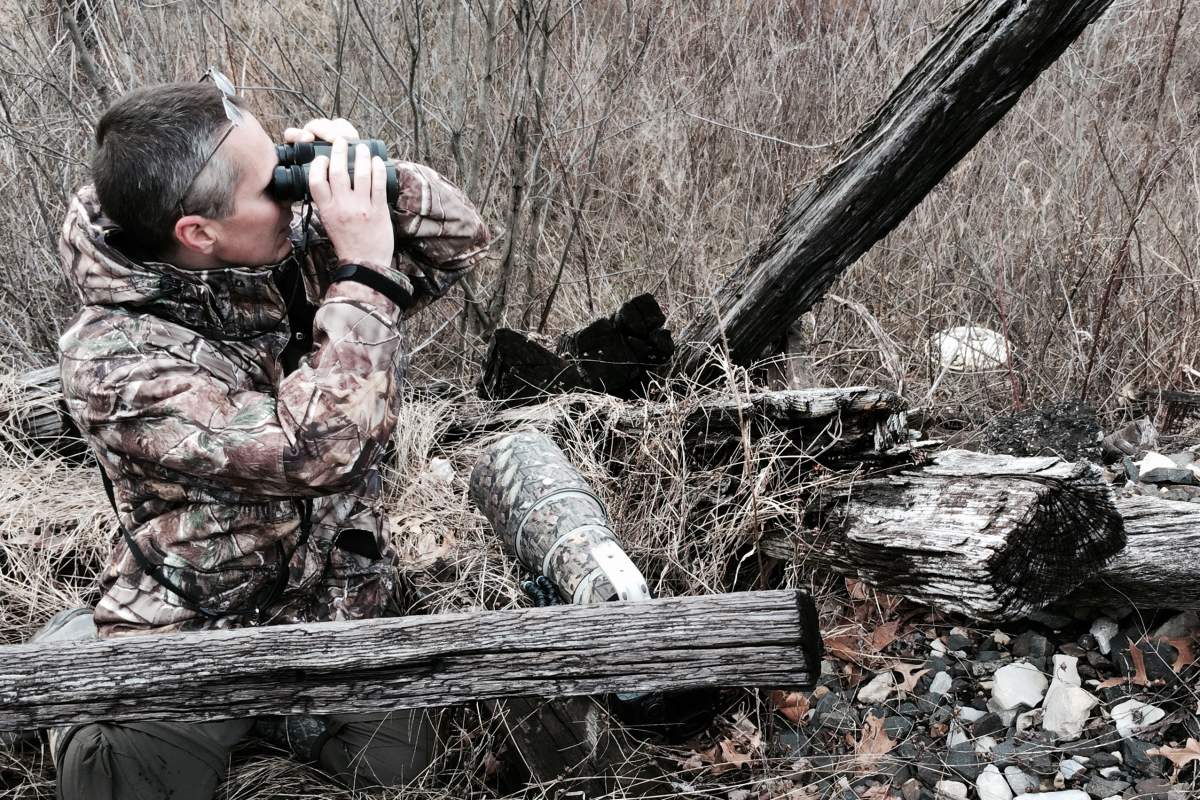 Steve Gifford tracks bobcats, and when he finds one, he snaps a photo or takes a video.

This video was shot at the Columbia Mine Preserve. The property is protected by the Sycamore Land Trust, a group for which Gifford is on the board of directors.

I accompany Gifford on a visit to the location where he shot that footage. Gifford holds a pair of binoculars to his face and crouches behind a pile of wood. He is dressed in camouflage, and sometimes, he sits in this hole for hours while he waits for bobcats. Gifford says we have about a 1% chance of seeing a bobcat the day I am with him.

For many people, waiting outdoors, keeping perfectly still would be exhausting, but Gifford has Parkinson's. He finds this activity to be therapeutic.

Gifford's diagnosis came long after he experienced his first symptoms.  At first, he didn't know what was happening

"The first symptom I had...was my lat muscles," he explains. "It was always really sore and really tight, and I couldn't, for the life of me, figure out why."

That was in 1994, 12 years before Gifford was diagnosed. Over time, he noticed that his movement was slowing and his muscles would flex or move unexpectedly.

The worst moment came in a doughnut shop. Gifford's wife, Sarah, left him alone at the counter while she visited the restroom.  He began to choke.

"And so at that point most normal people would raise their hand'Help. I'm choking"but the reality is that it's such an embarrassing thing. I spilled milk everywhere, and I ran out of the restaurant."

When Sarah found her husband in the car, he had swallowed the food, but they both knew he could have died. It was a turning point. They decided it was time to figure out what was happening.  It turns out the choking incident was typical for someone with Parkinson's.

"You don't really pass away from Parkinson's," Gifford explains. "They say [someone] passed away from Parkinson's [but] there's no such thing. They most likely asphyxiated, which is choking, or fell down some stairs and broke something and that led to complications or whatever."

Finally, after meeting with a neurologist and another specialist, Gifford was officially diagnosed.

"[A]fter that appointment, I'm kind of like, 'Woo-hoo'" Gifford relates, "because you can't deal with something until you know what's going on. My wife of course has got a different reaction. She's devastated, but I'm like, 'Heck. this is fantastic.' I mean, I've been doing this for how long now? And finally, we can do something about it."

Parkinson's is the result of a dopamine deficiency. It can lead to depression and problems with controlling one's muscles. It is is a degenerative disease. This means it gets worse with time and stress.

In the woods, Gifford stops to point out birds, scat, and signs of wildlife. We're at the Columbia Mine Preserve where he photographs bobcats. Gifford's feet shuffle along the path as we walk deeper into the woods. Eventually, we come to an opening along the railroad tracks. This is where he has shot his best footage of bobcats.

Gifford has tremors, but he has found ways to keep the camera still. He uses image stabilization and leans against objects like trees to balance the camera. If he can, he will use a quick shutter speed.

I ask Gifford if it is hard for him to stay still when he is waiting for bobcats, but he says no. He says that he feels calm. Parkinson's can create a lot of fatigue, and when Gifford is waiting on a bobcat, he is at rest.

We walk down the railroad tracks a bit farther and take a seat on a gravel embankment next to some water. We watch muskrats swim under the railroad tracks. Ducks come out from reeds, and over the water behind us the sun is bright and the sky is open.

This is when Gifford tells me to look at his hand. He is holding it parallel to the ground, and it is completely still.