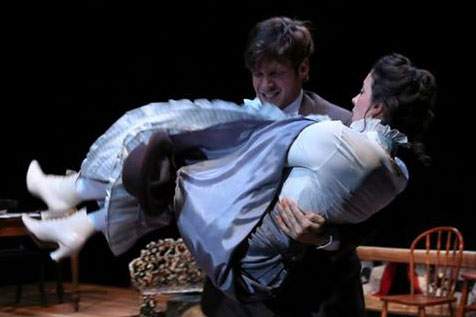 If you're looking for a play that will put a proud Hoosier smile on your face, look no further than the Indiana Festival Theatre's The Gentleman from Indiana. James Still's play based on the first big success of Indiana's Booth Tarkington offers a look at a small town Indiana around the turn of the 20th century. Frederick Stone as the dry Old Tom Martin and Maya Ferrario as the warmer Miss Selina Gibbs are our guides, but every one of the colorful characters of Flattville chime in with amusing comments and insights, and Yes, Kentucky does get a bit of gentle ribbing.

As the play begins a somewhat reluctant John Harkless, Zachary Spicer, arrives in town. Harkless is a bit of a Pied Piper. He makes the town's handy man Xen' Gibbs, Ian Martin into a reporter and with the promise of a job as copy editor reforms the town's drunk, Fisbee, Henry Woronicz . With this staff Harkless sets about to lead the town's failing newspaper.

Success follows success as the young man from the east learns and comes to value the town and its people. At an evening educational Harkless is spotted by Helen Sherwood, Amanda Catania. Later as she sings a Stephen Foster song, Harkless is captivated and wants to profess love, but Helen offers only gratitude.

Harkless's editorials stir up trouble and he becomes a bit of a hero and the target of a local "kkk" style group called the White Hats. Despite the efforts of the town to protect him, Harkless is seriously wounded and winds up in a box car in a distant town. As he convalesces with the support of old friend Tom Meredith, John Putz, Helen takes over the newspaper.

Helen had been adopted away from her alcoholic father by the Sherwood family and forced to take their name. As the editor of the paper, in gratitude for Harkless's rescue of her father, she proudly signs her columns H. Fisbee. The convalescing Harkless assumes she's a man and imagines her as a bold six footer.

Meanwhile there's political trouble back in Flattville. The evil political boss Rodney McCune, Whit Emerson, is running for congress and the local candidate doesn't appear to be a strong contender. Helen contrives to create a secret grass roots campaign for Harkless. It's so secret that he's totally fooled and a furious Harkless returns to Flattville. As he arrives to put things right, he's greeted by a political rally to nominate him, and a Helen finally ready to accept and return his love.

The Gentleman from Indiana is skillfully directed and orchestrated by Dale McFadden. It's a charming piece of well executed theatre with interesting characters, snappy dialog, a nice love story and a rousing climax. Zachary Spicer is quite perfect as the raw boned John Harkless. Amanda Catania is a glittering charmer as Helen. All the other actors do a lovely job of making the small town come to vibrant life.

Final performances of The Gentleman from Indiana at the IU Festival Theatre are this Tuesday the 21st, Thursday the 23rd and Saturday the 25th. If you haven't already seen the repertory company in Shakespeare's As You Like It, there are chances Wednesday the 22nd, Friday the 24th and a matinee on Saturday the 25th.