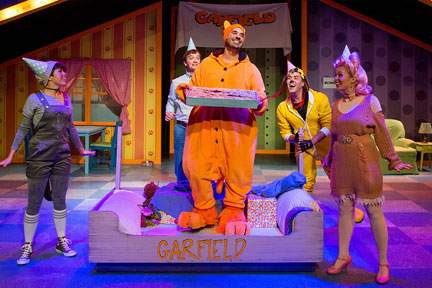 I'm George Walker for WFIU Arts. The Cardinal Stage Company's Cardinal for Kids series presents Garfield, the Musical with Cattitude. I took the WFIU microphone down to the Ivy Tech John Waldron Arts Center to query the kids. First I was checking on whether they actually knew who the chubby feline was: â€¦

It seemed that the show has a knowledgeable audience. Then I checked out the level of enthusiasmâ€¦

Well, ten, ten too and super. It seemed that the level of enthusiasm was high. Â Thanks to Clare, Sam, Kaylee, Oliver, Elissa, Caleb and Jaroslav for their comments.

Indiana born cartoonist Jim Davis has said that one of the biggest days of his life came in 1978 when his cartoon Garfield was syndicated in forty-one newspapers. Since then he's Â Â written (or in some cases co-written) all of theÂ GarfieldÂ TV specials and was one of the producers behind theÂ Garfield & FriendsÂ TV show. Despite all this success, Davis always wanted to see his grumpy cat on stage and singing. Two early attempts showed promise, but they never made it to the theatre.

Sometimes three is the charm and for Davis it's proved true. He worked with Michael J. Bobbitt, a theatre veteran and the Artistic Director of Adventure Theatre MTC to craft a story line. Then Davis and Bobbitt went to composer John L. Cornelius II who is a composer of concert music and also has works as music director/arranger/composer for a number of theaters. Cornelius contributed the lyrics and the music to for the show.

As the show at the Waldron Â began the theatre went dark, silence reigned and the stage lights came up on a restive Garfield, or at least what we thought might be Garfield, in bed under the covers. There was a good deal of laughter as actor Jason Slattery battled with his alarm. Garfield pitched the offending clock off stage to the right and then to the left as Chris Krenning as the clueless dog Odie, joyfully retrieved the offending time piece. Garfield finally resolved things by beating it into submission with a bat. The audience cheered his success.

One of the hits from the show is Garfield's angry response to Mondayâ€¦he sings, he frets, he even tries to tear the page out of the calendar, all to no avail. Despite his Monday misgivings, Garfield is pretty excited because it's his birthday and he's imagining a wonderful celebration. The only hitch is that no one else seems to be paying any attention to his momentous day

Arlene his ever want-to-be girlfriend just seems to complain about missing him as her night time fence sitting singing partner. Arlene is played by a classy Ashley Dillard with the broad Brooklynese and sadness of Miss Adelaide from Guys and Dolls or perhaps Audrey from Little Shop of Horrors. Garfield's nemesis, the much too cute kitten Nermel also seems unaware of the big day. Nermel is played with at least three extremely cute poses by Anna Butler. Even Garfield's human, John played by Cardinal Veteran Reid Henderson seems to be just going about his normal daily routine. Odie, well no one expects Odie to have a clue, anyway.

A deeply disappointed Garfield decides to run away. Out in the alley he falls asleep and there's a frightening dream sequence as he imagines his birthday continuing to be ignored by the whole family. Missing Garfield and worrying about him, Arlene leads Nermel and Odie out in search of the sad fat cat. They're united as Reid Henderson reappears as a uniformed and mustachioed animal control officer for a comical chase that was a high point of the show and ignited the audience.

Back home everyone is safe and sound, but Garfield is still really bummed out about his birthday. I'm pleased to say that everything, the celebration, the presents and even Nermel jumping out of the cake all work out for a happy and satisfying ending.

The Cardinal Stage Company's Cardinal for Kids is directed by Micah-Shane Brewer with music direction by Brian Samarzea. The set and costume design is by Chris Rhoton. Performances at the Ivy Tech John Waldron Arts Center continue through September 24.