Gardening At The Crossroads Of Beauty And Survival 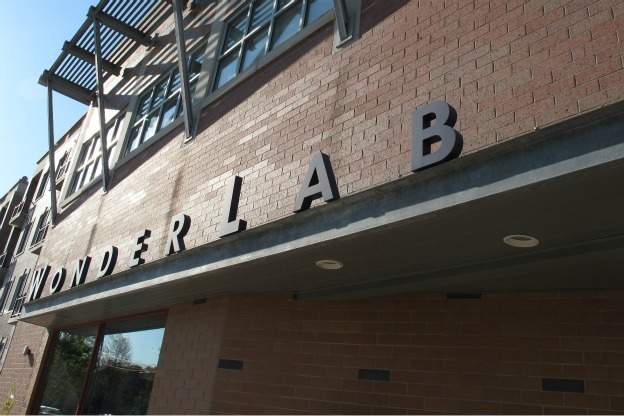 Garden Designer Jami Scholl has high hopes for a mound of earth that she's been sculpting in in the WonderGarden.

"It's more than just a bearded dragon in the ground!" she insists, with a laugh.

At WonderLab's First Friday program for April, Scholl has invited community members to plant kale, collards, and mustard seedlings into the creature's back. As the plants grow, they will not only approximate the look of the lizard's skin, but double as sustenance for a real bearded dragon that lives at the museum.

When she was proposing the project, that tie-in was critical for Scholl, who seeks creative, aesthetic solutions to strengthen food security.

A Marriage Of Science And Art

With one foot in the world of design and the other in agriculture, Scholl was brought in as one of two artists for April's Science of Art program, "Nature's Palette." It's the fifth year that Bloomington's WonderLab has presented the Science of Art series, but this year the museum of science health and technology is changing things up a bit. Instead of dedicating a month to programming that inhabits the intersection between art and science, WonderLab is extending the series throughout the entire year.

Each first Friday of the month, the museum presents an evening of demonstrations and hands-on activities organized around a central theme. Last month's program revealed how quilters rely on mathematics, chemistry and engineering; future Friday night programs will showcase the scientific underpinnings of limestone carving, photography, and screen printing.

Farming On A City Block

WonderLab is one of several venues throughout Bloomington's Entertainment and Arts district showcasing Scholl's yearlong project "Garden the City 2012: Painting With Edibles". These highly visible urban garden plots are intended to do more than decorate the city; they'll provide object lessons in how to cultivate edible and medicinal plants in challenging and unexpected situations

"I want to create an opportunity for people who aren't usually interested in food security," Scholl explains, "because we all eat."

I want to create an opportunity for people who aren't usually interested in food security," Scholl explains, "because we all eat.

In addition to such challenges as growing food in places with contaminated soil, a major obstacle would-be urban gardeners face is a legal one. As a member of the Bloomington Food Policy Council involved with the Urban Agriculture Amendment, Scholl has encountered myriad covenants restricting agricultural activity within certain zones and subdivisions. The laws are a relic of the post-World War 2 era, Scholl explains, when the new American culture of material abundance was discomfited by any association with the gritty days of Victory Gardens.

As a private consultant to clients trying to grow their own food in the legal wake of that era, Scholl brings her art training to bear.

"To me it's just a design issue," Scholl explains. "I can help them work around those legalities and still create something really beautiful in the front yard that's not a row crop."

Inside the museum, another artist who incorporates the science of plants into his work is demonstrating his technique for a crowd of attentive children, bearing mallets. They're especially anxious to assist artist Timothy Carter-East in pounding the pigment out of pansy and morning glory blossoms. This is Carter-East's rudimentary technique for his botanical collages; he uses more advanced technology to turn the collages into larger giclée prints.

Elsewhere in the museum, staff members and volunteers are helping children make paper into which lettuce seeds are incorporated. Made from blue and green pulp and shaped into discs, the resulting paper will resemble the planet Earth, and can be planted in a pot or the garden to grow lettuce.

The children who've enjoyed today's make-and-take activity at WonderLab may not be aware of it, but they've entered into the very nexus of art, science, and philosophy. "We must all tend our garden," suggested Voltaire's optimist Candide.

Which sounds a lot like Scholl's conclusion.  "Gardens," she asserts, "can save the world!"