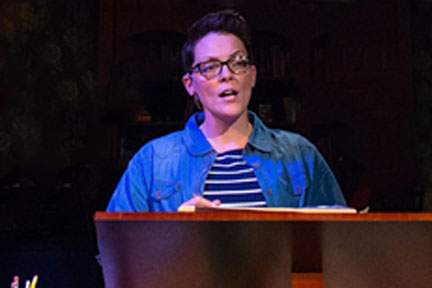 Amanda Biggs as Allison Bechdel presiding at her drawing table.

The Cardinal Stage Company's production of the award winning musical Fun Home opened its first weekend to packed houses and tickets for the rest of the run are scarce. Successful graphic novelist Allison Bechdel, Amanda Biggs is composing a memoir grappling with the suicide of her father. He was killed just four months after her own college coming out announcement and shortly after, she learned of his closeted homosexual life.

Scenic designer Britton Mauk has filled Ivy Tech's wide stage area and extended the design for Bruce Bechdel's overstuffed Victorian masterpiece of a home and funeral parlor to the sides. On the left, a gurney with a body in preparation appears as if by magic from a fireplace. On the right a faint couch disappears into the wall from which a college dorm set appears. Sometimes I wished for more centered action. The small orchestra conducted from a grand piano by musical director Charlotte Rivard-Hoster is neatly dispersed to the back in plain sight. Allison's mother Helen, Lanene Charters uses the piano for  Chopin  as her father seduces a gardener. Later the father and college daughter play a more innocent bout of Chop Sticks.

The narrative of Fun Home skips back and forth with scenes from Bechdel's childhood with Elena Rupp as one of the small Allisons and those with Natalie Shea as college aged Allison. Small Allison is badgered by her father's perfectionism and her own growing discomfort with girlish roles. The rebellious girl with her brothers, Isaac Lochbihler and Rys Nelson shine in a very funny commercial skit for the family's funeral business. Later the whole cast joins small Allison in a  vengeful dream sequence that puts her at the center of a wildly choreographed crimson clad sort of "Partridge Family" led by the show's utilitarian young man and father's love interests, Sean Puent.

Although there's a good deal of humor mixed with the antics and the seriousness of Fun Home, Natalie Shea as a college freshman has the joke the audience laughed the hardest for. The serious young freshman has been reading, and based on her research…more than one book…decided that she has to come out as a lesbian. When she announces this to classmate Joan, MaryBeth Black, Joan's logical question is, "With whom?" And the answer, which drew the laughs, is a still tentative "No one yet." Joan and the young Allison quickly test the parameters and shortly Allison announces that she's changed her major to "Joan."

Throughout the graphic novel that Lisa Kron adapted with music by Jeanine Tesori, Alison deals with the character of her father, Bruce. In her youth, she loved him, shared some of his artistic successes and quailed under his critiques. At the same time, his sexuality was driving him to dangerous situations. She sums him up as an ‘inside person,' but that never satisfies. Although the ‘come out,' college age Allison says that she's like him, they're clearly not and more importantly never have been the same. In college and even back home, she feels liberated and free. In that same place, Bruce feels scared, persecuted and frightened.

Although it comes late in the play it's Allison's mother Helen, Lanene Charters who dramatically details the story of their marriage. She's been largely a deferent helpmate to her husband for the show. She's trying to live a more or less normal family life with a multi-talented, closeted man who could alternate charm and brutal abuse. It's a sober, potent eye opener and caution.

The Cardinal Stage Company's production is ably directed by Kate Galvin.  She has a strong acting and singing cast at her command. Amanda Biggs as the older Allison is usually in charge at her drawing board. It moves around quite a bit and she sometimes actually enters a scene for potent effect. Natalie Shea does a fine job as the Allison who's balanced on the cusp of her own sexuality and the discovery of her father's. Saturday night's small Allison, Elena Rupp is an amazingly confident and varied young actor. Isaac Lochbihler and Rhys Nelsen were just fine as her rambunctious younger brothers. Sean Puent was the varied local boy.

Eric J. Olson is very strong as the family's driven father. Alternately maddening, dictatorial, insightful, charming…a demanding role well modulated and handled. Lanene Charters as his wife Helen at first seems just a piece of the play's furniture, but later is the one who dramatically tells Allison the father's story.

The colorful art of the musical theatre has taken the black and white drawings up and displayed the key emotional content of their story for us. Though it puts many of the pieces of Allison's life into sharp perspective, it's a tribute to the maturity of Allison's novel and of the musical that it's both an artistic success and it's also far from being a tidy package.

You can find this review and a preshow interview with Amanda Biggs and Natalie Shea at WFIU.ORG/ARTS