Front Page Flo Taps The Keys And The Floor 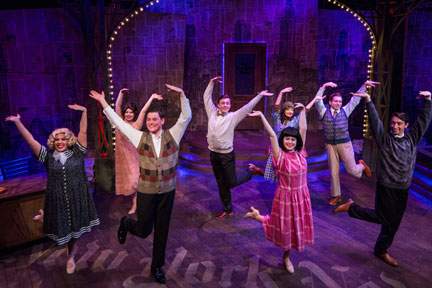 Front Page Flo is this year's BPP IU/ Musical Collaboration. The story of Flo, a 1940s newspaper gal on the trail of her big story places Claire Logan with the likes of Rosalind Russell in His Girl Friday and Katherine Hepburn in Woman of the Year. They're formidable dramatic competition, but then neither of them sings and they don't tap dance. If you're a fan of period pieces like Charlie's Aunt and The Boyfriend Front Page Flo is a show is for you.

Director and choreographer George Pinney has the entire cast of IU Musical Theatre majors acting, singing and dancing up a storm. Front Page Flo is a new show by Larry Kass, Sara Kass and Pinney with music and lyrics by Larry Kass. Flo's search for that big story leads to the reuniting of a couple of long lost twins and in a timely touch the foiling of a Russian plot to infiltrate and shape the mass media of the time.

Claire Logan is at the center of the action as the spunky Flo. Broderick Balsley is her editor and gracefully boyish wanna-be Frank. Maria Izzo Walker, the cleaning lady Emma has a locket that matches one that each wears. Janie Johnson as the energetic girlishly voiced Zelda with her hapless bo' Caleb Novell as Logan were a comic pair. They correctly suspect incest in  the family relations of their co-workers but are wrong about the Russian.

Connor Bernard is Brett, the smooth singing newspaper's owner. He's a bit of a flirt, especially taken with Nina Donville, the Russian spy, Olga masquerading as the sultry Latin bombshell Carmencita. She's his paper's new fashion editor. Brett's behavior in the 1940s might have been part of the male landscape and today might get him sued for sexual harassment.

Front Page Flo checks off all the boxes for a period musical.  There are character solos, intimate romantic duets and peppy group songs. Along with plenty of tap dancing there's a mysterious Tango, for the present and a Charleston and a dream ballet for the past.  The spy's apparent allies are an athletic trio of the "boys from Budapest." One of them later does a very funny turn as a bare chested Latin triller.

Of Front Page Flo's energetic and personable cast, I especially enjoyed Mary Izzo Walker as Emma the cleaning lady and Connor Bernard as Brett the owner. As representatives of an earlier generation they sang in the more operetta style in a nice contrast with the rest of the singers.

Chris Rhoton's set design places the action in the steel arches of an ell with walls covered with newspapers and grey outlines of the city scape. Scott B. Jones designed a varied and costume conscious show lit with period effects by Aaron Bowersox.

Front Page Flo plays through December 16th in the Ted Jones Playhouse of the Bloomington Playwrights Project. The book is by Larry Kass, Sara Kass and George Pinney. Music and Lyrics are by Larry Kass. George Pinney is the director and choreographer with musical direction by Terry Labolt

You can find this review and an interview with George Pinney and Claire Logan at WFIU.ORG/ARTS