Fresh Creativity Arises From The Ashes Of Old Failures 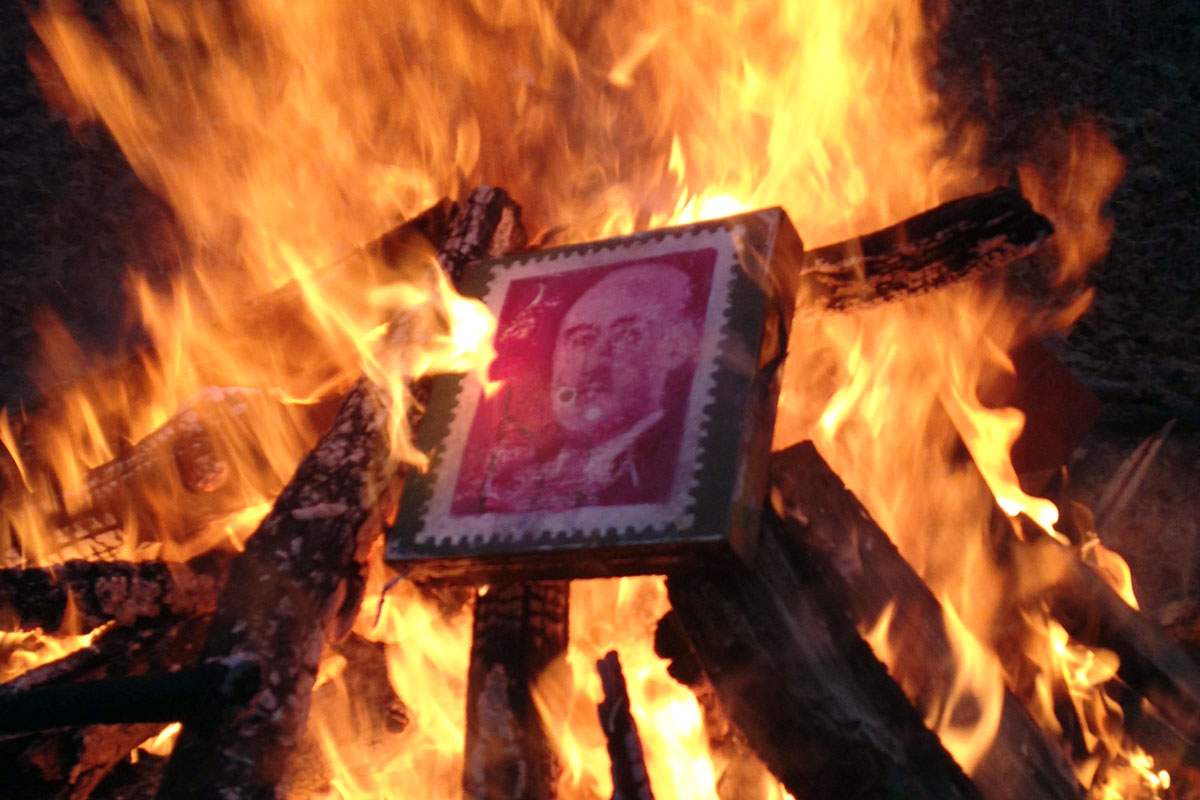 To Toss Or Not To Toss

Painter Sarah Pearce learned about Spanish dictator Francisco Franco when she was a kid. She collected stamps. Franco's stamp featured his image on a beautiful magenta background.

This year, she revisited her collection. She painted a series of 50 enlarged images of those stamps on wood panels.

After three months of working on the Franco stamp, it still wasn't what she wanted. "It's almost like it's cursed and I cannot bring it to life," she says.

There was something toxic about this piece. It had to go. But she's always had a problem throwing things away. "And as an artist, that can really be a problem!" It was taking up valuable real estate in the studio.

Franco was not going to be easy to get rid of.

"I don't think it's enough for me to clean up my studio. It just doesn't go far enough. I need something a little more memorable and a little more therapeutic," she says.

If I have this opportunity next year, if I know that I can ceremonially destroy some small portion of them, will it influence the way I go about my work?

They called it the Phoenix Bonfire. Pearce worked with fellow maker Jack Patrick to organize the event. The invitation said to bring a failed creation, broken tool, unfinished poem, or similar disappointment to throw into the flames. A dozen artists and their families gathered on a drizzly mid-winter evening.

One rule at the Phoenix Bonfire you can't comment on what other people are throwing into the fire.

Glass maker and blacksmith Michal Ann Carley pulls a handful of glass beads from her pocket. She's had these in her studio for a couple years now. "And I finally decided it's time. I don't need to hold onto those things from the past, so here we go."

Carley has a special connection to the flame. She needs it for her art. She makes glass and she works with steel. The beads were never part of a larger work. They were technical failures, examples of when the fire got away from her.

She says she deals with failure all the time. "It's devastating and it cuts to the core. And most people outside of makers don't really understand that that's a part of life," she says.

It takes courage to discard items you've created, even if you're not proud of them. Both Carley and Pearce agree about that. The gathering then also offers artists support for what they consider to be an act of bravery.

As Pearce watches the fire eat away at the wood panel, she renames her painting. It's now The Burning Franco Piece. She jokes that this is the best version of this work. "There's a hole in him now. He's crumbling from the inside, just like his evil dictatorial ideas consumed from within," she says.

The painting wasn't a total bust. She learned something about herself through the process she doesn't like mixing politics with art.

As the Phoenix Bonfire continues accepting offerings, Pearce is looking ahead.

"If I have this opportunity next year, if I know that I can ceremonially destroy some small portion of them, will it influence the way I go about my work?"