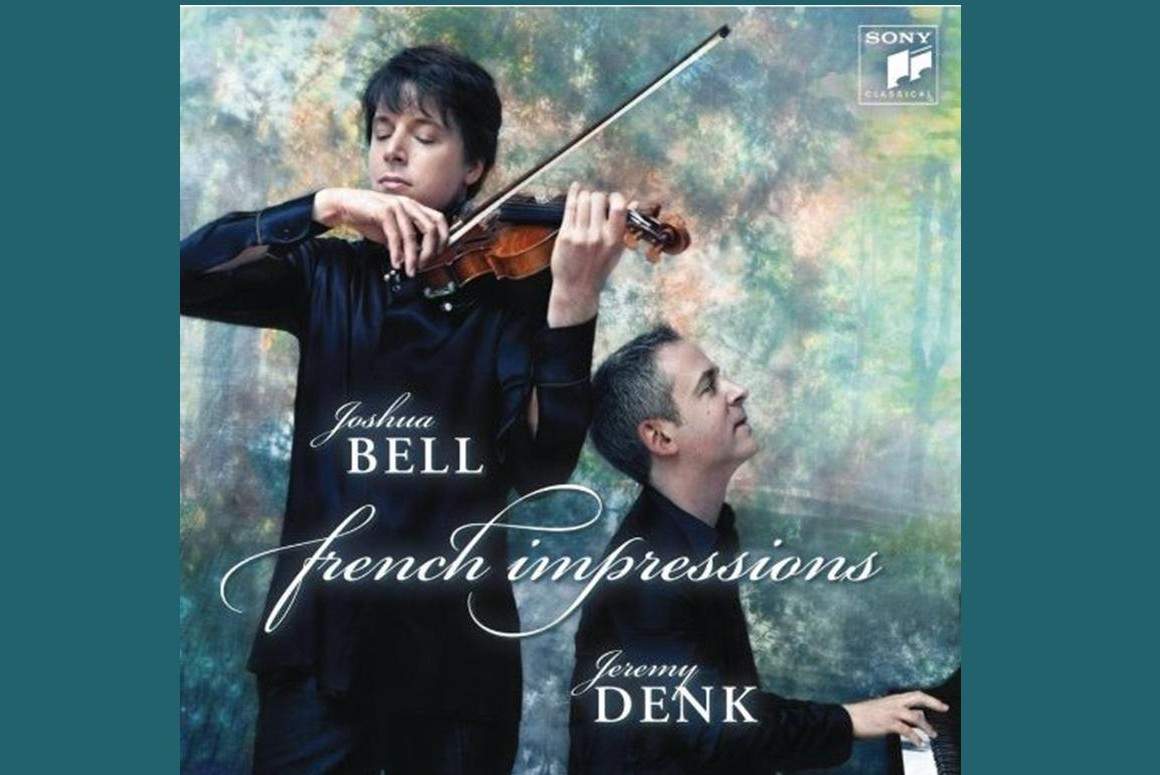 Frequent duet partners violinist Joshua Bell and pianist Jeremy Denk have recently recorded French Impressions. It's their first full CD together. Both players are deeply involved in the standard repertoire, but each has ventured outside as well. Bell has recorded music of Gershwin, Bernstein, and Corigliano while Denk has recorded a solo CD of music by the pioneering American composer and insurance salesman Charles Ives.

This CD finds the two very much in the French chamber tradition. French Impressions offers music of Ravel, Saint-Saens and Cesar Franck.

Although they were both students at IU's Jacobs School of Music, it took a while for Bell and Denk to get together.

"Actually, I came in after Josh left," says Jeremy.

"We were never there at the same time," Josh gently disagrees. "Well, I never really left," he admits. "I was born in Bloomington. I still feel like I'm a Bloomingtonian. But as far as my years with Josef Gingold and Jeremy's with Gyorgy Sebok we just missed each other."

Josh continues: "It took our playing together at the Spoleto Festival in Charleston for us finally to play something together. Even though my mother for years in Bloomington had kept saying ‘you've got the play with Jeremy Denk.' She'd gone to all his concerts. Now seven years later we have a couple hundred concerts under our belts and this new recording."

Denk takes on the question of their choices for the CD French Impressions. "In a very simple way of saying it, these are pieces that we played on many of those recitals. We often ended concerts with them. They're all very joyful and they luckily happen to have this French connection. I would say that Josh and I are interested in the beauty of the sounds that come from our respective instruments. So we really get a special pleasure out of playing this kind of music that is so sonically lush, about color."

Among the choices, the Cesar Franck Sonata in A Major holds a particularly special place for Joshua Bell. "Certainly that's the piece that I've played the most in my life. I first learned it with Josef Gingold in Bloomington, probably at the age of thirteen or fourteen. So that's thirty years of playing the piece. I recorded it once before, many years ago with Jean Yves Thibaudet. Since, I've played it so many times with Jeremy that I thought it was justifiable to record it again."

Camille Saint-Saens said that composing music for him was a natural as an apple tree growing apples. Denk responds to the quote, playing with the words. For him, Saint-Saens' Sonata No. 1 "was a fairly natural-feeling piece." The composer was "obviously a tremendous keyboardist and a preternatural genius." He goes on to say that "the piece has a lot of incredible charm and elegance in the piano writing and some pretty stormy great passages in the first movement and a wonderful moment in the end of the piece, where both Josh and I go into a kind of insane unison and let everything fly."

The third piece from French Impressions, Ravel's Sonata for Violin and Piano, takes Denk and Bell out of the late romantic period and into the 20th century, but Bell emphasizes the connections. "Ravel does have his own musical language. And yet it still is connected to these other French works, his sense of color, sound color and his sound world is so much a part of the whole. There are a lot of challenges, special musical challenges for us. It's a very rewarding piece and makes a lovely finale for the CD."