Nothing Says Freedom Like Marks On A Wall: Cairo Street Art 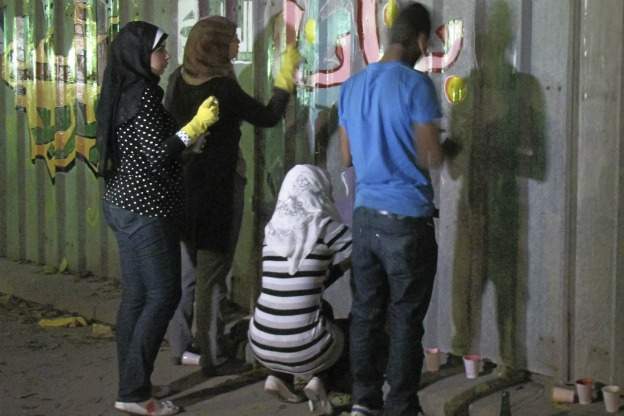 Making War, Making Peace is the concept at the center of Themester 2011 on the Bloomington campus. As a complement to the IU Art Museum's exhibition of Iranian posters of revolution and war, the Fine Arts Library lobby is hosting a photography show documenting the street art that appeared in Cairo last spring.

"I'm not an artist, I'm not an historian," explains retired IU professor John Woodcock, whose photos make up the exhibition The Art of Revolution: Street Painting from Cairo's Arab Spring. "I'm a tourist with a camera, who happened to be in a very lucky place this April."

Woodcock's photojournalistic foray in Cairo was quite serendipitous. When their group tour to Egypt was cancelled after the popular uprising, John and his wife Peggy opted to go it alone. Staying in the Zamalek district of Cairo-located on an island in the middle of the Nile-the Woodcooks literally bumped into street painting just steps outside their hotel.

The profusion of public expression was entirely new in the Egyptian capital. Woodcock explains,

There was virtually no street art in Cairo at all before the revolution, before January 25th. Every Egyptian we spoke to talked about not being able to speak about politics in public, without risking your life or severe incarceration.

Just two months later, though, it was impossible to ignore the extent to which the Egyptians were reveling in their new-found right to express themselves. The first paintings the Woodcocks encountered were five murals, eight feet high and nine feet across, exuberantly proclaiming the success of the popular revolution. The murals deploy familiar words and icons, from "25 January" to a peace symbol to a bloody handprint to Facebook and Twitter, the indispensable vehicles of the revolution.

In their palette, many of the Cairo muralists pay homage to the red, white and black of national banner. The bulging letter forms and graphic style that a number of the muralists employ recall non-commissioned public painting familiar to an American audience.

"Graffiti is of all people, and it always has been," asserts IU fine arts professor and street artist Malcolm Smith, who incorporates the forms and spirit of graffiti into his ceramic vessels. Smith joined Woodcock on a panel organized by IU's Undergraduate Association for Art Historians on the topic of Street Art in the Twenty-First Century. "Graffiti got coded onto Hispanics and African Americans," he explains, "but as soon as it hit New York City, it was done by every demographic group."

The infinitely adaptable art form has become a sort of international lingua franca for the oppressed.

Panelist Elizabeth Rauh, co-curator of the Iranian poster art show at the IU Art Museum, studied graffiti's European iterations before examining street art in an Islamic context. A doctoral student at the University of Michigan, Rauh first discovered the Iranian artist known as A1one in the public sphere of the Internet.

Having dropped out of the graphic design program at Tehran University, A1one felt, according to Rauh, "as if he had no voice in the Islamic Republic. He couldn't get his work shown in the galleries because it wasn't religious enough, so street art became his outlet." A1one became increasingly political, and prolific in the wake of the disputed Iranian presidential election of 2009.

In Cairo, the work of Ganzeer, or MoFa (a nickname for Mohamed Fahmy), is similarly ubiquitous, as Woodcock discovered. Although Ganzeer's occupation isn't as perilous as it is for Tehran's A1one these days, active artists and bloggers do not enjoy complete freedom, according to Woodcock. "Ganzeer was detained late in May for a day," Woodcock notes.

At the same time, though, the new Egyptian regime appears to condone the flourishing of public expression, as evidenced by a group of decidedly non-surreptitious street artists Woodcock encountered. Although the student painters worked at night-which is standard protocol-they were being taped for broadcast on television the following day. In Woodcock's photograph, the painters' work surface is being illuminated by the lights from the TV crew.

Although the TV taping could suggest that the once-subversive art form has lost its edge, the sheer abundance and variety of Cairo's street art following the popular uprising bespeak the primacy of self-expression. From the simple Egyptian tri-color that children everywhere were painting on their hands, John observes, "they painted tree-trunks, they painted cars, they painted furniture in public." As Smith puts it,

The language of putting marks on a wall and co-opting public space for communication is the purview of everyone.