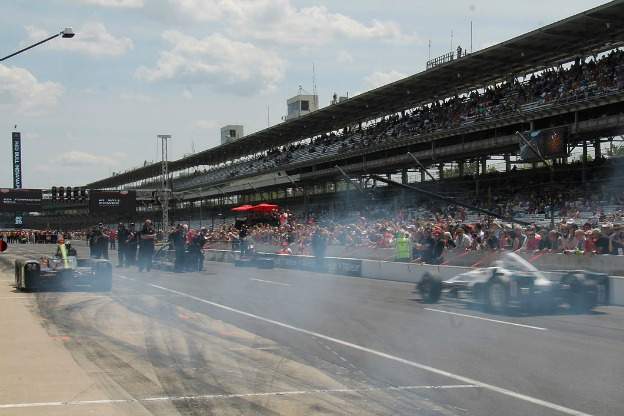 Adam Henze is a grad student at Indiana University.

"I'm in the Ph.D program in the School of Education in the Literacy, Culture, Language Education program," Henze elaborates, "so I study what's called spoken word pedagogy."

And for the last week, the scholar has been riding a media junket.

"During the interview I did this morning I was constantly startled by the noises. The other person that was on this morning program was covering American Ninja Warrior. They also had a drunk history recollection of the Indianapolis 500, and then me with my poetry there at 8 am this morning."

And so why would a doctoral student of spoken word pedagogy be making the rounds from the morning zoo to Marketplace?

Trochees By The Track

The longtime Hoosier has been named the official poet for the 100th running of the Indianapolis 500.  For the anniversary, the statewide non-profit agency Indiana Humanities revived a tradition from the first few 500s of printing a poem in the program. Henze beat out more than 200 others with his submission, "For Those Who Love Fast, Loud Things."  He's been given a $1000 cash prize, two tickets to the race, and the opportunity to read the poem at the track during one of the qualifying weekends in May.

Taking poetry out of the classroom into unlikely settings is a priority for Henze, who identifies as a performance poet, or slam poet. Slam, Henze explains, seeks to reconnect poetry with the broader community.  "The argument is that poetry had lost its audience," Henze suggests, "that it kind of separated itself from the common public, which is the people who need poetry the most."

I don't think that my words can heal anybody, but maybe they can inspire somebody to write something that will heal themselves.

The idea that people need poetry might seem quaint. But Henze seems to regard verse as food and water, and seeks to bring it to those in the most dire circumstances.

"That's really what I've kind of dedicated my life to," says Henze.

Words To The Rescue

Henze's first teaching assignment was in a juvenile detention center in Bowling Green, Kentucky.  He's been poet laureate at Culver Military Academy and teaches a yearly poetry workshop at the Indiana Women's prison in Indianapolis.  And he's collaborated with musicians to make poetry videos for patients convalescing at Eskenazi Hospital in Indianapolis.  "Right now," Henze asserts, "someone might be getting out of an important operation and listening to one of my poems."

Is Henze suggesting that poetry can if not save your lifeat least help you heal?

When I was in middle school and high school I was really struggling with depression; I was struggling with my own self esteem.  And I saw this program called Def Poetry, [in which] these great poets would talk about some of the things that I was struggling with in this brave and bold manner.  And it made me think ,'Wow, if they can do that, then I can do that too.' So, that's what I hope. I don't think that my words can heal anybody, but maybe it can inspire somebody to write something that will heal themselves.

Admittedly, Speedway on Memorial Day weekend is not a juvenile detention center or a surgical unit, but Henze relishes the opportunity to be the liaison between motors and metaphor.

"I would love if there are poetry fans that maybe get a little curious about 500 culture, and maybe vice versa; maybe there are some 500 fans who say, 'Maybe poetry is not as wack as what my third grade teacher taught me.'"

For Those Who Love Fast, Loud Things

This poem is for the track folk who just love the smell of Ethanol.

This is an anthem for the hearts that've surged at the scope of the Pagoda.

For the hands that know the feeling of slapping the North Vista tunnel ceiling.

For the lips that whisper along with Florence Henderson when she sings,

The hot dog chompers and buttermilk sippers, and

granddads with ledger pads in suede cases and locked zippers.

This is for every kid that's stood along the stretchwith toes

on top of a cooler and their fingers gripping the fence.

For the moms smeared with baby sunscreen changing diapers in the stands.

This poem is for the Brickyard pickers, marching band

This is for the pit crews, the announcers, the flyby pilots in the sky.

For the girl who'd never seen her dad cry until the day Dan Wheldon died.

This poem is for the Andy Griffith neighbors, the binocular

This poem is for every shoulder with a Memorial Day tattoo.

This is for the drivers willing to go bumper to bumper, for the flag

flappers, and the earbud-in-clutched-palm fist pumpers.

This is your poem Indianapolis, taking the turn with direct injection.  Race fans,

thank you for being the sparks that start the engines.

Dedicated to Evan, and all IndyCar fans, 2016