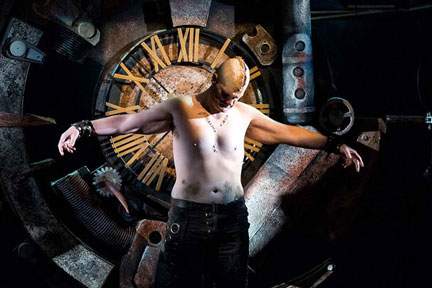 Just in time for Halloween the Cardinal Stage Company presents Frankenstein in the reimagining of Nick Dear. Dear's version was premiered at England's Royal National Theatre with Benedict Cumberbatch and Jonny Lee Miller alternating in the roles of Victor Frankenstein and the Creature. The adaptation skips Mary Shelley's elaborate framing scenes and the early accounts of Frankenstein's life. It also eliminates the error prone Igor of James Whales 1931 film with Boris Karloff.

The play begin with the dramatic birth of the Creature and presents the story largely through his perspective. Frankenstein has been fueled with the excitement of the process of creation, but at the moment that the Creature comes alive he recoils and runs away. It seems strange but I found myself wondering if the men who in their excitement created the atomic bomb felt some of the same shocked aversion to their creation.

The abandoned Creature's first contact is with a couple of hobos who beat him. Later he seeks shelter near the home of Felix, his wife Agatha and their blind father DeLacey. From DeLacey he learns to speak, read, write and think. As the Creature learns about love he dreams of a female partner who appears in a graceful dance. He's also able to read Victor's journal and the account of his creation. When DeLacey introduces the innocent Creature to his children they are afraid and drive him away. In anger he sets fire to their house and sets off to revenge himself on his creator.

After a long hard journey, mostly by night the creature comes to Frankenstein's area of Geneva. In a touching scene, Victor's young brother William is blind folded as "it" in a game of hide-and-seek when the Creature first meets him. As William becomes afraid there's a struggle and he's killed. When the body is discovered along with pages of the journal, Victor swears revenge.

Victor tracks the Creature to the Alps, but with the promise that he'll leave civilization and the threat that otherwise he'll kill him, Frankenstein promises and creates a female. However as it seems that perhaps the Creature may procreate an angry superior race the doctor breaks his promise and  rips the new creation apart. Vowing revenge the bitterly angry Creature leaves

On the eve of Victor's wedding with Elizabeth, Frankenstein seeks to trap the Creature. He's posted armed guards around and armed himself with a pistol. A nervously bridal Elizabeth is comforted by her maid Clarice. The Creature appears and Elizabeth seems to charm him. He promises not to kill her, but then reminds her that he's learned from her husband to lie and he kills her.

In a final scene Victor has pursued the Creature to the Arctic and falls exhausted. The Creature revives his creator and asks for his forgiveness, but the two are simply bound in the struggle and press on.

Randy White has returned to direct this powerful, well-acted production. Christopher Ellis is a wonderfully eloquent actor as the mute and then articulate Creature with Will Allan as an ably conflicted Victor Frankenstein. Mark David Kaplan was delightful as the Creature's blind tutor and later as Victor's rigid father. Ian Shaw and Callum Miles alternate in the role of Victor's younger brother.  Hayley Burgess was a warmly sympathetic Elizabeth. Sam Cusak and Mathew Weidenbener as the vicious hobos and later as Victor's agents were personable. Clair Logan was graceful as the Creature's dream bride.

Set design was by Courtney O'Neil with costumes by Johna Sewell lit by Mike Durst. Nicole Bruce was the makeup artist, Diane Buzzell the choreographer. Mike Price designed the sound.

The Cardinal Stage Company's production of Nick Dear's adaptation of Frankenstein continues in the Buskirk-Chumley Theatre through November 5th.

If you come to WFIU dot ORG/ARTS you'll find this review and an insightful interview with the actors who play the Doctor and the Creature.