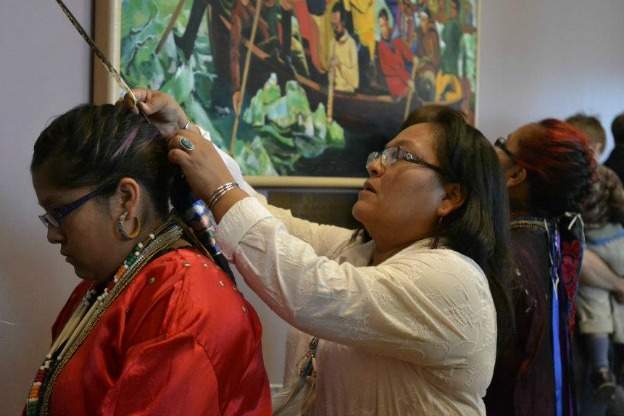 November is Native American Heritage Month, and Indiana University's observance kicks off the first weekend in November with the Fourth Annual Traditional Powwow at the Indiana Memorial Union. The event, which has attracted hundreds of visitors in past years, boasts a line-up of nationally known dancers and singers, along with traditional foods, crafts, and regalia.Â Co-presented by the Office of the Vice President for Diversity, Equity, and Multicultural Affairs and the First Nations Educational and Cultural Center, the powwow is also supported byÂ the American Indian Center of Indiana, and the Native American Graduate Student Association (NAGSA).

"I remember being on a bus on the way to Oklahoma one time," recalls NAGSA Treasurer Terri Miles, a graduate student in Criminal Justice at IU, "when I was probably fourteen. And this little girl was sitting next to me and we're just playing Defender togethershe's probably only about six. And we're just chitchatting back and forth and she's playing my game, and I'm playing it, and we're making good friends. And she turns to meand she's a little blonde girland she goes, 'What are you?' And I laughed, and I said, 'Well, I'm Native American,' I said, 'I'm, you know, Creek and Sac and Fox.' And she goes, 'What?' And I say, 'I'm Indian.' And she goes, 'No you're not.' And I said, 'Yes I am.' Now we're having this fight, you know, this fourteen-year-old kid and this six-year-old kid, back and forth. And then finally she goes, 'You can't be Indian.' And I said, 'Why not?' And she goes, 'Because they're all dead.'

It's an assumption that Terri Miles, along with her colleagues in the Native American Graduate Student Association, are hoping to dispel through IU's Fourth Annual Traditional Powwow.

The powwow can be seen as a 'terribly important' enactment of culture.

"I think it can be seen as a terribly important enactment of culture," asserts Nicky Belle, a graduate student in Anthropology, whose specialty is powwow history and contemporary powwow dance culture.Â "A powwow is an intertribal, pan-Indian event where a lot of people from all different tribal nations come together and sing and dance."

"When I was young, in my twenties, I used to dance the women's jingle dress," recalls Davina Two Bears, a graduate student in Anthropology and Archaeology of the Social Context. "I just love the jingle dress.Â It makes such a beautiful sound when they're dancing: it sounds like rain!"

"1887, I believe, was the first dance that was called a powwow," notes Belle.

The word was an old one, but the ritual that took shape at that time was born of a harsh new reality.

From 1887 to 1934, American Indian dance and musical and ceremonial performance was outlawed.

"The reservation period-late 1800s-when a lot of people were being pushed from their traditional homelands and weren't allowed to hunt and battle and do war in the ways that they traditionally had," Belle elaborates. "And different tribes and different people were coming together in solidarity. People who had been against each other before were now coming together and starting to share ideas and aspects of culture."

For the next fifty years, however, that sharing of ideas and culture was highly regulated.

"From 1887 to 1934," Belle asserts, "American Indian dance and musical and ceremonial performance was outlawed."

There was an exception, however.

"Wild west shows became really popular," Belle explains.Â "American Indian people were allowed to dance, as long as they were dancing on Fourth of July, and on Flag Day, and on Veterans Day."

The Indian Reorganization Act of 1934 removed the ban on Native American performance. In the meantime, the modern powwow has been gaining traction.

"You could go to a powwow every weekend all year long!" claims Miles.Â When he lived with a family in Canada one summer, Belle asserts, "there was some serious powwowing up there. You'd go to a Tuesday powwow, you'd go to a Wednesday powwow, a Thursday/Friday, and then a Friday/Saturday/Sunday.Â Then you would rest on Monday and do it all over again!"

My kids are the only Native students at Bloomington High School South and there's over a thousand kids there. It was very important for me to find a native community here in Bloomington.

Granted, the powwow circuit is more robust in Canada and out west. But IU, Belle explains, is exceptional among institutions east of the Mississippi:Â "Other universities that have a strong native studies program or a strong cultural program also have large native populations as well as federally recognized tribes as well as federally supported programs or statewide supported programs, whereas Indiana definitely does not."

Home Away From Home

Indiana's demographic reality is something Davina Two Bears lives daily. A Navajo from Arizona, Two Bears brought her own children to Indiana when she came to grad school.

"My kids are the only Native students at Bloomington High School South and there's over a thousand kids there. It was really hard for them to transition from Arizona, where the Native population in their school was 30 or 40 per cent."

Being so far away from home and my family, it was very important for me to find a Native community here in Bloomington.Â Â The people at FNECC and all the friends I've made there are like family for me.Â They look like me, they understand me, I can relate to them.Â I've gotten really close to everyone who's involved with FNECC.Â I would have a really hard time if FNECC weren't here for me as a student.

Two Bears' children will be dancing at the Fourth Annual Powwow, as will many acts that travel the national powwow circuit, including the Battle River Singers from Minnesota, the Wisconsin Dells, and Ho Chunk Station, a youth ensemble.Â "It's great to see those young kids who are so involved and so knowledgeable in how they dance and how they sing," notes Belle.

"It's history that needs to be researched and given back to the people," Two Bears agrees, "the children, especially."