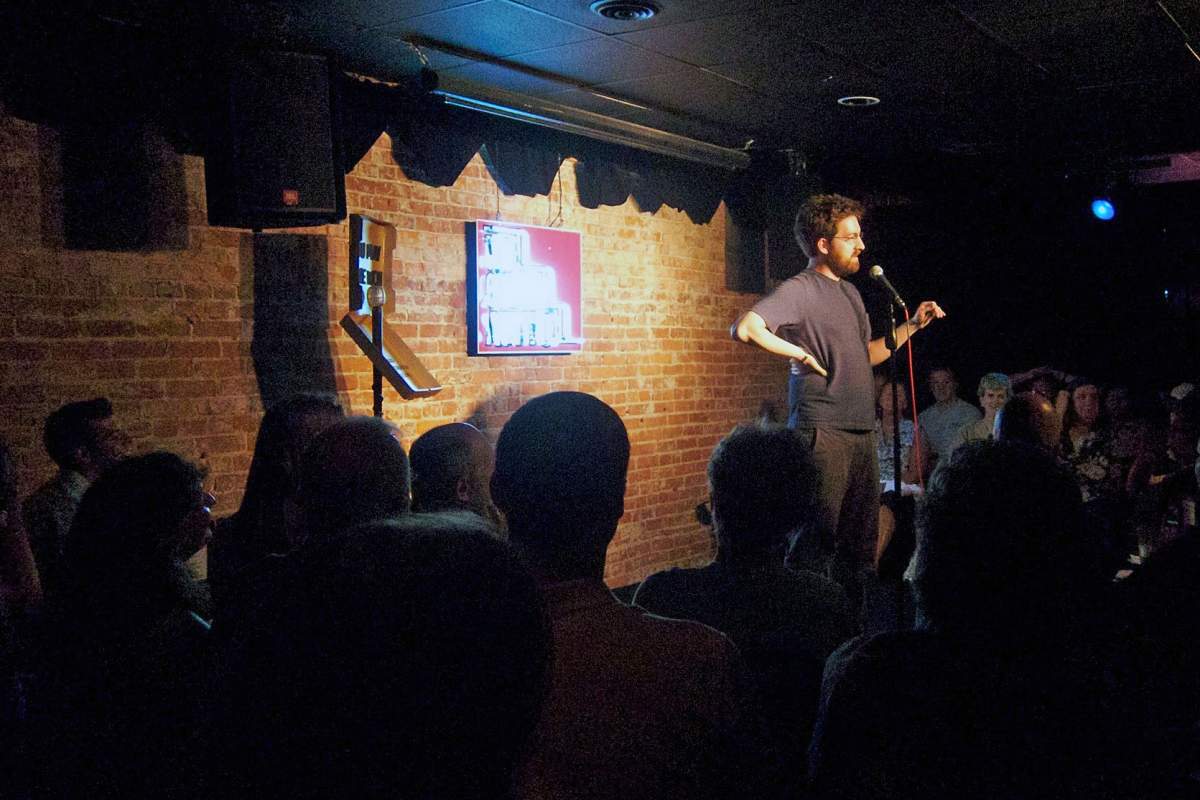 It was 2008. Jared Thompson had just quit his job to open a comedy club in downtown Bloomington, and things were not going well. People weren't coming out to hear the comedians he was booking. He knew he needed a star to save his club, so he got Doug Benson for a weekend run in December.

Those shows sold out.

"He was the moment I knew that if I was going to move the needle in this town, I'm going to have to give them something that interests them," he says.

But, getting high-profile comics to town wasn't easy at first. Logistically speaking, traveling to Bloomington from LA is difficult. He couldn't pay them as much as clubs in big cities.

But he saw the potential.

He brought someone on board who had already spent two decades on the local comedy scene, "And we literally taught Bloomington audiences how to be good comedy audiences," says Brad Wilhelm, a regular host at the Comedy Attic and the former longtime host at Bear's Place's Comedy Caravan.

Wilhelm has witnessed the evolution of Bloomington audiences. In the '90s, he says people didn't necessarily come to comedy clubs to see the performer. "You came because you were going out for a night out at the comedy club," which sometimes involved lots of stiff drinks and perhaps some unruly behavior.

Wilhelm realized pretty early on that, as the first person who walks on stage, he needed to educate the audience on how to behave. He came up with "The Rules" 14 years ago Be quiet, turn off your phones, tip your wait staff, and laugh.

"I tried to do them in a light-hearted and still authoritative way so if I did have to come up to tell someone to shut up or put their phone away, I wouldn't be seen as a bouncer." Wilhelm does The Rules at The Comedy Attic when he hosts on Thursday nights.

There's also a video that plays before every show where Thompson lays it out like this Keep the table-talk to an absolute zero. "We want people to not feel welcome if they're going to talk during the show. We want people to leave thinking, ‘That's not for me,' because it isn't if you want to talk," he says.

"Bloomington, when I'm in the room before the show, feels like people came out to listen and to see a show," says comedian Stewart Huff. Thompson and Wilhelm both say he's one of the ten best comics working today.

There's no questions that the audiences are what have kept people like Doug Benson, Hannibal Buress and Marc Maron coming here.

Huff is on the road performing shows 49 weeks of the year, so he knows audiences. He calls his new material a 60-minute philosophical argument, and it doesn't always get a positive response.

Like earlier this year, when he performed a couple shows in Myrtle Beach. He said the crowd there just didn't get it. Contrast that with the audience members he speaks with after shows at The Comedy Attic, "People in Bloomington will come up and they'll add something to what I said."

And during the shows, he hears people laughing, yes, but also reacting with surprise and curiosity. He can tell they're engaged in his material.

Some of the credit has to go to YouTube and Comedy Central for bringing comedy to the masses. Wilhelm says simply being exposed to it online has made audiences better.

Thompson's bread-and-butter is still the live experience. He remembers when Jimmy Pardo played The Comedy Attic on New Year's Eve 2010. "He sat me down and he was like, ‘There's a heartbeat to this that you don't see everywhere.'"

Four years after that show, Bloomington has solidified its reputation as a destination for the top-5-percent of comics on the scene today, as Thompson puts it.

"There's no questions that the audiences are what have kept people like Doug Benson, Hannibal Buress and Marc Maron coming here," he says.

But no matter how sophisticated Bloomington audiences may be, Thompson and Wilhelm will probably never stop reciting The Rules. The success of Bloomington's comedy scene may just depend on audiences' ability to be quiet and listen.