The Founding Of Alcoholics Anonymous 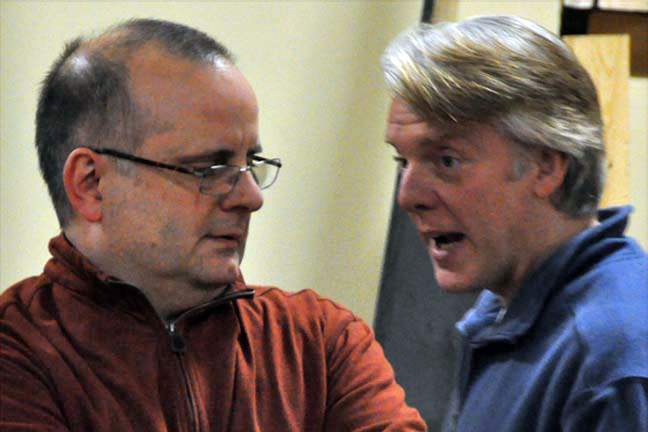 Bill W. and Dr. Bob, a play about the founding of Alcoholics Anonymous and Al Anon, is being produced by the Cardinal Stage Company under the direction of Randy White.

A Success After Hurdles

It's become a popular play, but there were some hurdles. The first director for a production said that he loved the play and wanted to stage it, but didn't think that audiences would like it. A number of productions since have supported his affection for the work and proved that in fact audiences do enjoy the show.

Eleanor Berman, Marketing Director for Cardinal, says, "It's a really powerful story about these two men who meet and they realize, to help each other in their sobriety, that they need a group dynamic. The story that the play tells is a powerful one about humanity and their relationship, what they discover together. Even if people don't connect with the Alcoholics Anonymous part of the story line, they do connect with the basic story of two very different people coming together to help one another."

From A Glass Of Sherry To The Bottom Of The Barrel

Actor Chris Vettel, who played the uptight, upper class Englishman Henry Higgins in the Cardinal Stage Company's production of My Fair Lady, returns to Bloomington to play the ‘down on his uppers' alcoholic salesman Bill W. "It's a wide spectrum of jobs we've got," says the actor. "Bill's character is very straight ahead. He's a salesman through and through, a type A personality. He's a foil for Dr. Bob, who's a surgeon, more staid, home spun, a bit passive."

Vettel goes on, "The play primarily is about these two men, their meeting, their absolute desperate alcoholism. But the play is also about their wives. These two women are also sharing their experiences. Experiences as innocent bystanders connected to people with this problem. They went on to found Al-Anon."

For the production of Bill W. and Dr. Bob, the Cardinal Stage Company has been very active in engaging with the recovery community. For the opening on February 4, they are holding a special gala reception and performance. The evening's ticket price will cover the reception, the performance and it sponsors a ticket for someone in recovery to come at another date to see the show for free.