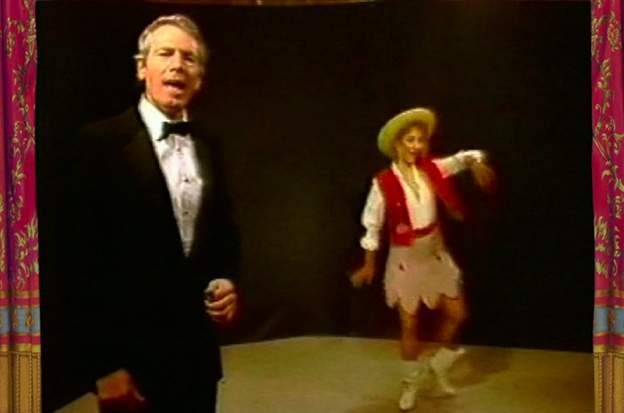 Nick Prueher leads a bit of a charmed life. How many of us have turned a hobby into a vocation?

"I would not have predicted this career, 10, 12 years ago," Prueher says. "It stemmed from boredom."

Growing up in small-town Wisconsin, he says, you had to invent your own fun. For him and his friend Joe Pickett in the '80s, that meant scavenging at thrift stores and yard sales for curiosities – cassettes left in people's answering machines, t-shirts of dubious taste – and, by the early '90s, VHS tapes.

"So it was very much like, here's this latest video find, have some friends over to my parents' living room, watch it, make jokes," says Prueher. "In 2004 we decided to take our collection outside of a living room and put it into a theater, and people showed up! And they continue to show up. And so it's very strange to us that this little inside joke has become something more than that."

What was their inside joke is known now as the Found Footage Festival, and this week, Prueher and Pickett are making Bloomington a stop on its 10th-anniversary tour. Prueher says they're in theaters and clubs 130 nights a year, taking clips of videos produced on the very margins of our culture and placing them front and center, enhancing them with backstory and wry commentary.

They've helped cement cult status for the likes of Harvey Sid Fisher, a model and actor who stood, tuxedo-clad, next to a costumed interpretive dancer on a community-TV soundstage and lip-synced a song he'd recorded about each sign of the zodiac.

Anyone who sees this might be inclined first to ask: where on earth did this come from? Prueher says he and Pickett still find most of the videos themselves while browsing thrift stores by day on the road, but that an increasingly large portion of the show owes to fan submissions that arrive each week in the mail.

"I mean, it's like Christmas morning," he says. "You cannot wait to unwrap it and see what's in it. So, in this show we're bringing to Bloomington, it's got, I'd say, 30 percent videos that people have submitted. It feels like you're sort of spearheading some kind of art project or archive of these VHS relics."

One of those better-known relics was "It Only Takes a Second," a mid-'90s safety film produced by an insurance company loaded with staged industrial accidents that bordered on slapstick.

The Found Footage Festival championed it years before it could have gone viral online. The Festival, in fact, is rooted in that time, when viral video meant trading copies of copies of videotapes and sharing them privately with friends. But now, even though seemingly anything is available on YouTube any time, how the Festival has not only survived, but thrived and grown, is clear enough to Prueher.

"They appreciate the role of a curator now more than ever," he says. "Just because there's such a morass of material out there, and you need somebody to be sifting through it and separating the wheat from the chaff. That, and also the fact that we have a personal connection to this footage, having found it ourselves, mostly, and tracking down the people in the videos, so we kind of take it a step further."

Prueher also says the Festival can serve as a kind of antidote to this age of viral video, which is so much about small screens and solitude.

"I really hate when people just say, like, 'Hey, here's this video, let me show it to you on my phone.' Or on a two-inch window on my laptop. It's not the same as, like, sitting in somebody's living room and watching something. It's that communal experience. I think people maybe don't even realize they miss it until they come to the show."