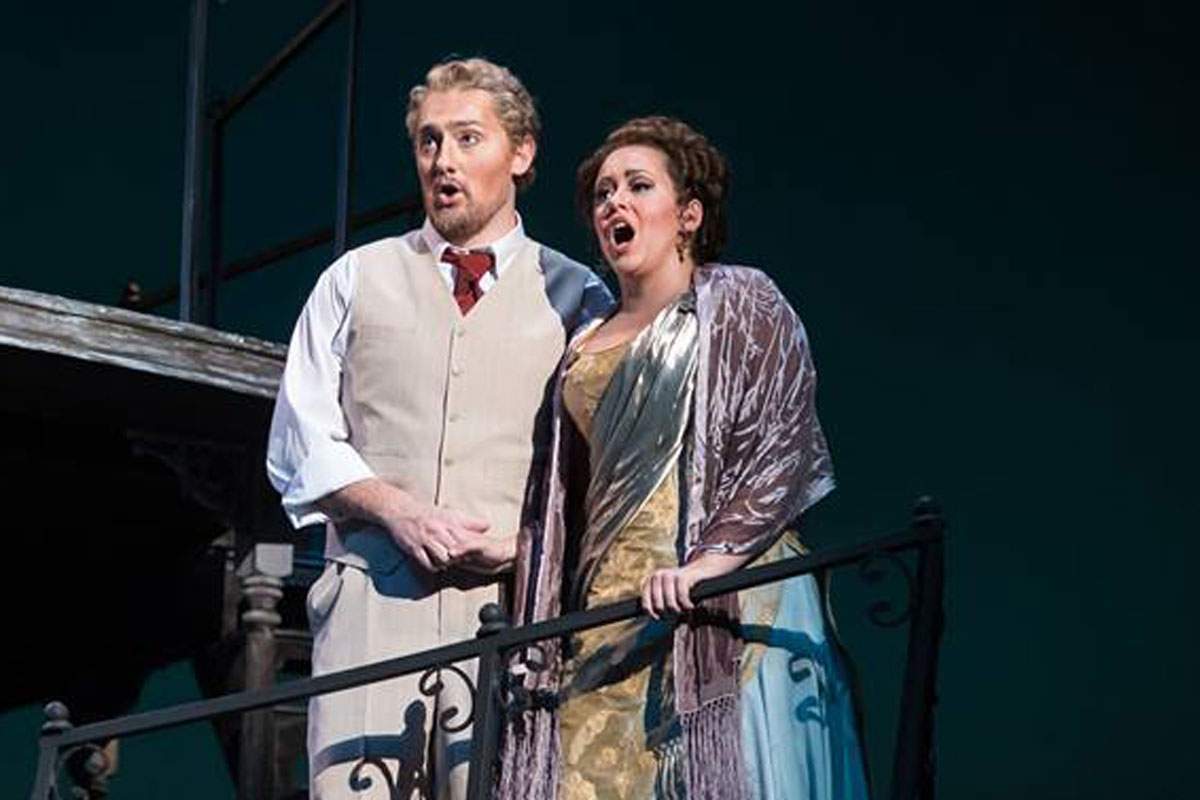 Florencia en el Amazonas at the IU Musical Arts Center is Daniel Catán's account of love and understanding on a journey up the Amazon River. The libretto by Marcela Fuentes-Berain is inspired by the writings of the award winning Columbian author Gabriel García Marquez.

The crew and passenger list for the handsomely detailed boat, El Dorado of designer Mark Frederic Smithis a varied one. The Florencia of the title is a famous opera singer returning incognito after years to her country for a concert and to seek the lover that gave her the strength to go out into the world. Rosalba is a journalist with a precious notebook of quotations from Florencia that she hopes to make into a book with an interview.

Paula and Álvaro are a bickering couple. They're traveling to hear Florencia sing. The two remember the day to day tedium and the routine insults of their marriage while forgetting the love that brought them together

Arcadio is the Capitán's reluctant crewman and nephew. His dream is to be a pilot flying high above the Amazon not plodding along through it. Riobaldo is the other crewman, but in the opera he's also the narrator and a river spirit in the magical realism of the tale.

At the helm is the Capitán, the only member of the party who's thoroughly grounded and well satisfied with his boat and the river.

As the curtain rose on Florencia en le Amazonas we're portside as the El Dorado prepares to sail. The waterfront with the boat in the background is teeming with life. Director Candace Evans with the help of costumer Linda Pisano has made the IU Opera's chorus into a whole village of interesting and active characters. I found myself looking at one group, then another and then back again simply unable to take it all in. It was an impressive accomplishment, but more about the choreography and the costuming of that flexible chorus later.

As the El Dorado gets underway we learn of the sadness of the diva Florencia at the loss of her butterfly hunting lover into the jungle. The Journalist Rosalba actually loses her precious journal only to have it retrieved by the reluctant Arcadio. In a neatly plotted game of cards the winning Rosalba and Arcadio are attracted to one another while the losing Paula and Álvaro bring up long lasting grudges.

In a dramatic storm the ship is saved by Álvaro, but he's thrown overboard and Arcadio saves the boat. Riobaldo as a river spirit calls upon the river gods and the storm ceases. The first act of Florencia en le Amazonas is over in a very quick hour.

In the second act, as the passengers recover, Florencia explores her feelings about her lost lover, unsure if she still feels him or not. Rosalba's notebook has once again gotten wet, but she learns that the mysterious lady passenger is the woman she's been seeking and that its love that has given the diva inspiration. Rosalba and Arcadio measure their life's goals, hers to be independent his to fly and they come to feel that their love can allow both. The magical Riobaldo retrieves Álvaro from the waters and he and Paula are joyfully reunited.

It's a fast moving act that seems to end a little too quickly with mostly happy endings even as the actual docking of the El Dorado is blocked by a cholera epidemic in the town of the opera house.

I promised more about the creativity of Candace Evan's direction and Linda Pisano costuming of d the chorus and here it is. They appear as a chorus of river spirits, strange forest creature with electric eyes, crocodiles, magic fish and a whole legion of the spirits of death. Occasionally, I wished for a little more gentle lighting and a bit more fog, but the evocation of the river, and the Amazon forest is pretty amazing.

Saturday night Lauren McQuistin found just the right tone for the sad diva Florencia. A highlight of the evening was the duet as Rosalba and Arcadio pledged their love in a nice performance by Hayley Lipke and Michel day. Courtney Bray became a lovely dignified figure as you moved from the gripey Paula to the woman rediscovering and affirming her love, nicely partnered by Christopher Seefeldt as her Alvaro. Rivers Hawkins was the confident Capitán. Robert Gerold as Riobaldo was an effective guide, river spirit and crewman.

I've only heard Florencia en le Amazonas once, but I think that audiences and singers do and will like this opera. It allows very nice vocal display with long lines and a nicely supported variety. Most of the sound is European, but there are crucial sections with Brazilian rhythms. Critics hear the lushness of the vocal writing of Puccini, the drama of Richard Strauss and tonal experiments of Debussy in the score. Catán himself mentions Stravinsky, Ravel and the great film composer Erich Wolfgang Korngold. Whatever the influences, clearly Cantán has made them his own.

Final performances of Florencia en el Amazonas are this Friday and Saturday (October 19, 20) in the IU Musical Arts Center at 7:30.

You can find this and other opera and theatre reviews and interviews at WFIU.ORG/Arts