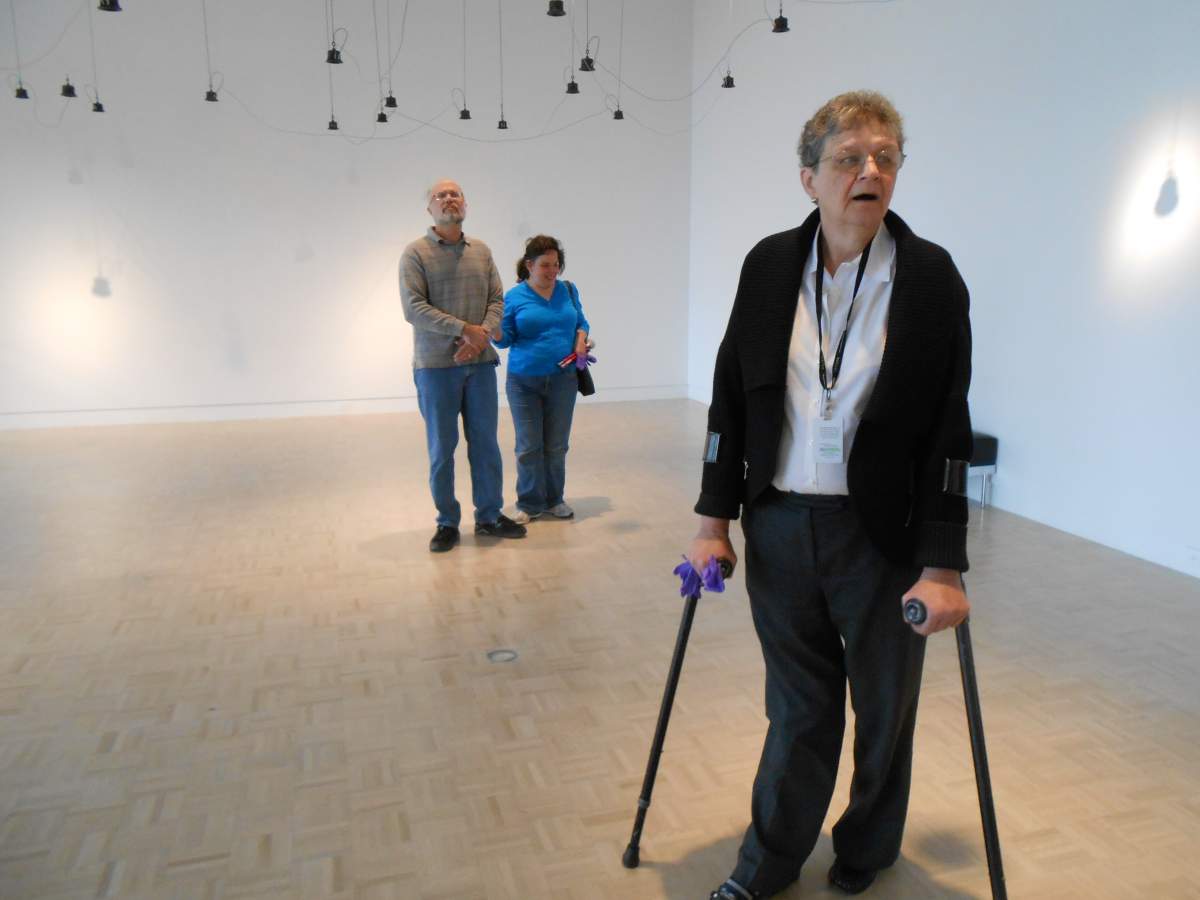 It started as a party trick

"We were at a Christmas party last year," recalls Bloomington resident Machell Philippone. Â "One of the games was, you take a piece of paper and you put it on top of your head. And you were to draw a Christmas tree â€¦ Ok, now put the ornaments on the Xmas tree."

A tricky proposition. But how much trickier would it be if you not only couldn't see what you were drawing, but had never seen a Christmas tree?

"I tried to imagine the branches of the tree," Philippone explains, "from what I could feel of a Christmas tree."

Christmas trees are not the only trees sheÂ hasn't seen.

"I have no vision whatsoever," states Philippone. "I was born blind. My mother had rubella, and she didn't realize she had it."

If you go to a store, and you buy a set of cookie cutters, take a look at that Christmas tree cookie cutter. Â Is that a tree?!

As someone who's never seen, PhilipponeÂ has a special perspective on visual representation and its conventions.

"Do you recall I said in the center also there is a tree?"

Marian Pettengill is leading a low-vision tour December 13, 2014 at the Indianapolis Museum of Art. Â The museum offers the tours on a regular monthly basis. Â This month, seven members of the Bloomington-based Heartland Chapter for the American Council of the Blind are visiting.

"It's a large sycamore," Pettengill continues. "It's unruly. It has huge branches and lots of leaves off to the left and the right. And then sticking straight up through the center are some branches that look very barren. There are fewer leaves on it."

PettengillÂ is providing a customized audio-description ofÂ The Rainbow, a landscape painting from 1878 by the American artist George Inness. Several vision-impaired visitors are seated in folding stools in front of the painting.

The ability to see in your mind's eye is something we're all hardwired to do.

"The goal is for them to experience it themselves, rather than my giving a typical lecture at a museum," Pettengill explains.

"The descriptions need to be based on what is tangible, rather than what are the intangibles," elaboratesÂ Elisabeth Axel, founder and president of Art Beyond Sight. Â Since 1987, the New York City-based organization hasÂ partnered with the IMA-among many other museumsto provide docent training for low-vision tours.

"So, for instance, for a congenitally blind person," Axel explains, "a concept of light and dark or shadow, could be described as the stream coming from a shower."

In other words, an analogy to something a visually impaired person can experience through another sense.

When The Gloves Come On

In addition to audio-description, the tour at the IMA includes the opportunity to touch sculpture, including Richard Pousette-Dart's Cathedral (1990) and Orly Genger's Len (2008). Â Having donned nitrile gloves, the visitors are navigating around the monolith that is Len, using one hand as an anchor asÂ they interpret with the other. Â "If you put your hands really against it," Pettengill suggests, "you'll feel indentations between the rope."

"Part of the ropes were, just sort of like how I expected, kind of flat," tour participant Mary Stores describes, "but some of them kind of jutted out. Â And feeling it, it wasn't really symmetrical like I expected. Â I kind of had this idea that maybe it should be."

Never having seen, how did Stores create that mental image?Â Elisabeth Axel wasn't on the tour with her, but understands the process of creating a visual analogy. The low-vision tour materials Art Beyond Sight has developed incorporate the findings of cognitive scientists. Â "The ability to see in your mind's eye," Axel has learned, "is something we're all hardwired to do."

The Essential Is Invisible To The Eye

"Yeah, Â a lot of people say, 'What do you mean, you see?'" reports Machell Philippone. "EvenÂ though we don't see art the same way you do, through your eyes, we do see it."

"Whether it's a person who's blind or visually impaired or who's sighted," Axel explains, "looking at the stuff of human experience it's not just history that then comes to life, it's the spirit of our fellow manthe core of what was in their heartand that's an experience that anyone can take part in."