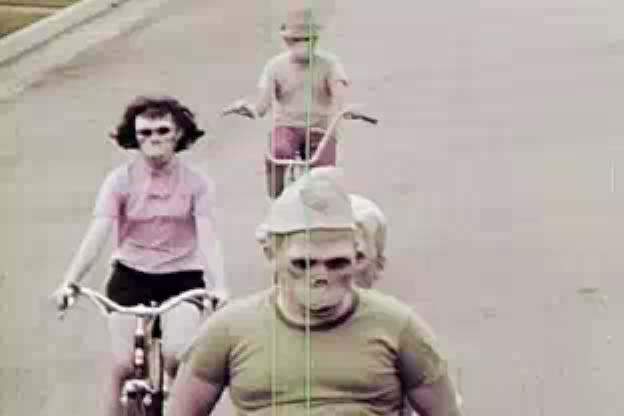 You might remember watching educational films when you were a kid-movies about how to treat fellow students with respect, how to have healthy relationships, or even films about academic subjects like biology.

Watching them today, these films can seem dated. This is especially true of the social guidance films of the 1950s, which have titles like "What to Do on a Date" or "Are You Popular?"

The Indiana University Libraries Film Archive has more than 46,000 of these educational films, all of which provide a glimpse into our cultural history.

Narrated by actor and director Orson Welles, this film "talks about technological change in the modern world, it talks about artificial limb innovations, modular architecture, hippies and how they're living this transient existence and it's just basically really funny and campy and interesting for those reasons," McRobbie says. "But it's also really relevant to the way people still view change and innovations."

The film follows Chucky Lou as she's taken from the wild to live in an Indiana state park. The park's caretaker looks after her; he builds her a large habitat, feeds her well, but also teaches her to wear doll clothes and sit upright in a child's chair.

"I wouldn't call it sinister, but it is odd when you see a woodchuck propped up on a child-sized chair, wearing a Victorian dress. With kids looking at her without much regard for what is going on in front of them," Evans Groth says. "The gravity of the situation isn't as heavy for them as it is for those of us looking at it through the internet or on film."

In the film, a group of children decides to ride their bikes to have a picnic. Over the course of the 9 blocks it takes to get to the park, all but one of the children are struck down by various obstacles because they failed to adhere to the rules of bicycle safety, like stopping at road signs or using hand signals.

When a child is struck down by a steam roller, manhole, or other obstacle, a cartoon flash symbol appears, similar to the "pow!" in Batman cartoons of the same era. Contributing to the surreal quality of the film is that essentially, the children are being killed by these obstacles, but the other students keep going as if nothing is wrong.

And for some reason, all of the children are wearing monkey masks and tails.

"As far as the weirdness factor...it's one of the ones that takes the cake for sure," Harman says.

Film Archivist Rachael Stoeltje has a special place in her heart for social guidance films with titles like "How to go Steady," and says its interesting to contrast the lessons on dating rules, courtesy and respect being taught in the 1950s to the dating techniques and texting of today.

But forÂ this list she chose the 1985 film "Drinking and Thinking," which was made by IU Professor Ruth Engs.

The film shows people drinking excessively, and had tips for how to drink more responsibly. Stoeltje says Engs was criticized for showing student drinking, because they "felt that she should just say people shouldn't be drinking."