Fanning The Flames That Forge Art And Science 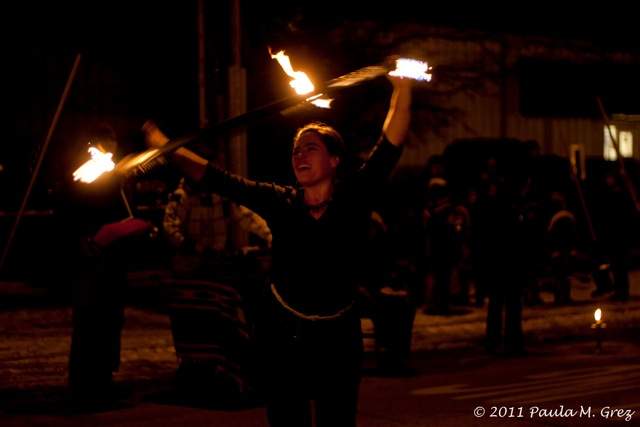 For four years running, Bloomington's WonderLab Musem of Science, Health, and Technology has been seeking to lure its patrons into science through the gateway of artâ€¦ or maybe it's the other way around. In either case, in this coldest time of year, WonderLab's Science of Art series presents a month of programming designed to fire up the imagination about the art-science connection.

The imagination is not the only thing ignited at WonderLab.

Forging The Bonds Of Community

The first Friday in February, "Forged by Fire" got off to a dramatic start. Opening night festivities for WonderLab's 2011 Science of Art Series included a performance by the Kali-Ma Fire Troupe, who incorporate the Samoan fire dance ritual into their repertoire. The museum got permission from the city to close off Fourth Street in front of the facility, where the fire-wielding dancers gyrated to rhythmic music on the cold dark night.

A kinetic sculpture masquerading as a bonfire provided another focal point for the crowd gathering outside. Matt Meers was tending the fire in the brazier at the base of his sculpture, above which a turbine spun. A grad student in IU's Fine Arts department, Meers thinks of the sculpture as "community-powered" since those gathered around its warmth can control its motion by adding wood to the fire.

In addition to bringing the Bloomington community together this winter evening, fire has kindled a kinship among the various disciplines at WonderLab.Â Andrea Oeding, Assistant Gallery Operations Manager, explains, "We want to connect the art and science communities."

The WonderLab's Science of Art series takes a broad theme-such as color, or sculpture-and programs demonstrations by local artists and hands-on activities related to that theme. Forged by Fire features demos by Sue Westhues, who burns designs on gourds; Charlie Dupree, who melts wax into an encaustic medium to make paintings; glass-blowers Ross Thackery, David Martin, and Abby Gitlitz; and metalsmith Jack Brubaker.

Trial (And Error) By Fire

The WonderLab staff organizes child-friendly activities to complement the artists' craft. To replicate encaustic painting, for example, children use tiny quilting irons to melt crayons onto cardstock. The empirical process at the heart of scientific experimentation is accessed through art.

"What we're seeing," Oeding explains, " is that kids are observing and experimenting with their art experiments the same way they would with science experiments. This is a way to try something new and see if it works-or go over it, if it doesn't."