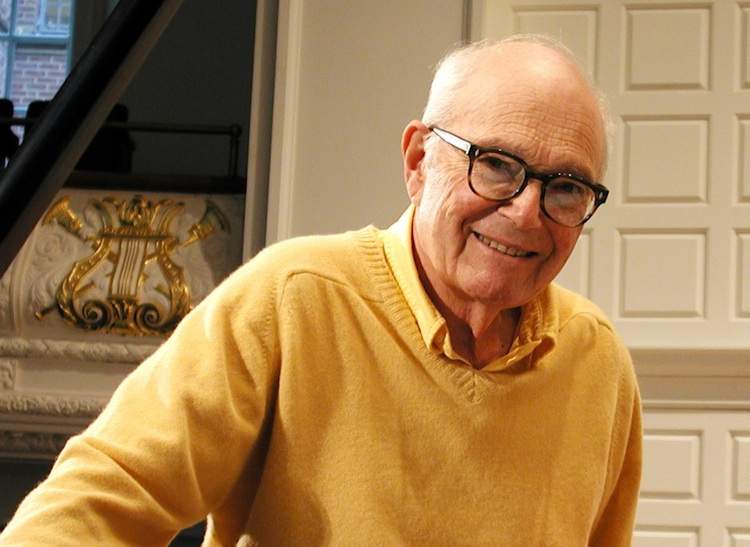 WFIU's featured contemporary composer for the month of December is Ezra Laderman. Dean of the Yale School of Music from 1989-1995, Laderman currently serves the school as a Professor of Composition.

Born in Brooklyn, New York, Ezra Laderman began composing at age seven, giving the first performance of his Piano Concerto (1939) with his high school orchestra. During his collegiate studies he worked with acclaimed composers Stefan Wolpe, Miriam Gideon and Otto Luening and Douglas S. Moore at Columbia University, where Laderman received his Master's degree in 1952.

Committed to teaching, Laderman has held positions at Sarah Lawrence College and the State University of New York at Binghamton before joining the composition faculty at Yale University in 1988. He has held residencies at the Bennington Composers Conference, the American Academy in Rome, and at the Rockefeller Foundation at Bellagio. Amongst his numerous awards, Laderman has received three Guggenheim Fellowships and the Prix de Rome.

A sought after composer, Laderman has received commissions from the Philadelphia Orchestra, the New York Philharmonic, the National, Louisville, and Chicago Symphonies and numerous other regional and national orchestras. He has written for such internationally renowned artists as Jean-Pierre Rampal, Yo-Yo Ma, Emanuel Ax, Sherrill Milnes, Judith Raskin, the Beaux Arts Trio, and the Vermeer, Concord, Juilliard, and Tokyo String Quartets, among others.

Many of Laderman's works carry programmatic elements stemming from highly personal experiences and deeply felt convictions. An infantryman in WWII, Laderman composed his Leipzig Symphony in 1945 after entering combat during the Battle of the Bulge. His second symphony was written as a musical portrait of Martin Luther King, while his third symphony, Jerusalem, was commissioned to commemorate the twenty-fifth anniversary of the State of Israel and depicts various stages in the history of the Jewish people.

Written on a variety of biblical, historical and fantastic subjects, Laderman's operas form a large part of his output. In 1993, Laderman turned his attention to American pop culture with the commission and première of Marilyn by the New York City Opera. Based on the life of actress Marilyn Monroe, the opera incorporates jazz and pop styles from the 1960s into Laderman's own musical aesthetic.

Having studied with a stylistically diverse group of composers, Laderman's compositions reflect a fusion between tonally based materials and nontonal and aleatoric elements. In addition to his operatic and symphonic works, Laderman's musical output also includes chamber music, concertos, string quartets, solo instrumental pieces and vocal works. His compositions can be heard on the New World and Albany labels.

WFIU will feature music of Ezra Laderman in our classical music programming throughout the month of December.