From Eyesore to Eye-Candy: Yarnstorming On ISU Campus 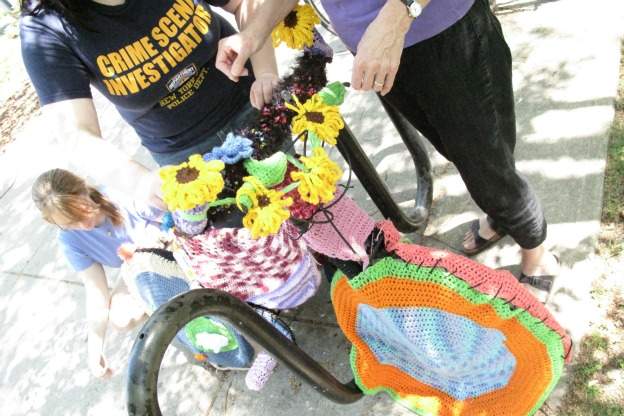 On your way into class, or your place of work each day, you start to notice it.

Maybe not right away, but after a few weeks, or months, you start to see that bicycle-you know, the only one left in the rack after everyone else goes home for the evening, or the summer-and it gets the wheels of your imagination spinning: why would someone abandon a perfectly good bike? Did they have to leave suddenly? Did they decide to forsake their material possessions? Were they kidnapped?

For at least two years, Nan McEntire had been noticing an old rusted yellow bike left outside Root Hall, on Indiana State University's Terre Haute campus. "I did notice over the years that people began to vandalize it," recalls McEntire, the Director of ISU's Folklore Archives, housed within Root Hall. "It's missing its seat, for example."

The bike's decline continued until one of McEntire's students decided to give the increasingly pathetic object the kind of attention it cried out for.

A Knack With Needles... And A Penchant For Pranks

"That bike needs a little yarn-love!" decided Amy Krupa, an ISU sophomore sometimes known as "The Happy Hooker". The English major is a member of the Knitwits, a campus group that teaches knitting and crocheting and donates their creations to charity. Krupa's solution for the derelict bike was born of her knack with needles and her research in the folklore archives, where she works.

"We spend hours going through folders labeled Snipe Hunts, Pranks, Local Legends, Ghost Stories, Folk Belief," explains McEntire, Krupa's supervisor. "All you need to do is go through the Pranks folder and let your imagination take it from there."

Like any good prank, Krupa's scheme took planning. "I came out about midnight," she confesses, "measured out the bike, came back and drew up some plans, and crocheted the pieces."

When it came to pulling it off, Krupa recruited accomplices among her fellow folklore archives workers Jack Ciancone (aka "Sew-jah Boy") and Leah Newton (aka "Periwinkle Pterodactyl"). Monday morning, April 30, 2012, the guerrilla artists and their mentor assembled outside of Root Hall 6:30 am, to lash the multicolored crocheted pieces to the forlorn bike. McEntire captured the happening here.

Krupa and her peers didn't invent the art form, although they recognize its placement squarely within the folkloric tradition. "Yarnstorming," Krupa explains, "is also known as knit graffiti, guerrilla knitting, or yarnbombing. People have done it not only the US, but in the UK, Sweden, Australia, and around the world."

A quick Google search reveals a rich array of improbably yarnstormed stuff-from a permanently parked bus to an abandoned gas station, the objects of yarn affection tend to be the conventionally overlooked. The beautification process also incorporates a good deal of mischievous playthe British group Knit the City, for example, includes members who call themselves "Deadly Knitshade" and "Lady Hook".

A Bike In A Sweater

It's hard to explain the immediate thrill of seeing a bike in a multicolored sweater locked to a rack on a college campus.

But a closer look reveals even more cleverness, not to mention craftsmanship.

"The front wheel looks like a space pizza," creator Krupa explains, "it's a weird pink with crazy designs. There's a granny square that extends over the entire mid-section of the bike. And my favorite piece is on the back wheel-it's a lily pond, complete with a lily and a goldfish."

"It's like a Christmas tree!" exclaims a passerby on the third day of the object's presence in front of Root Hall. "I thought it was a raincoat from afar. I really like the concept. I'm really happy that one of our students did this."

As it turns out, the timing couldn't have been better: it was the first day of final exams. "So people were staggering out of their 8 am final thinking, I didn't say enough about Romanticism," McEntire speculates, "then they see this bike, and it communicates such fun, and liveliness, and playfulness."

"The looks that I see," Krupa agrees, "all the double takes and smilesit's much more fun than spray-painting."

Nonetheless, unauthorized displays of whimsy will always prompt certain types to look askance. On hearing about the exploit, one Root Hall employee asked McEntire whether he should call Campus Security.

Far from fomenting anarchy, however, the public art piece seems to have generated only positive response. Five weeks after its installation, McEntire was pleased to note how well the piece was faring.

"No one has taken so much as a little yarn pom-pom," she reports.

On the contrary, the piece has elicited protectiveness. McEntire has observed passersby brushing off the leaves and blossoms that have fallen on it. Another response has been equally benign: as if by domino-effect, an anonymous prankster has set the bike's back wheel in a cardboard lost-and-found box.

The artful prank has even received the blessing of ISU's president. When McEntire emailed Dan Bradley to bring him up to date, he was already aware of the display. "My wife and I were wondering what that was all about," he replied. "We love it!"

An Antidote To Inattention

The delight that everyone seems to be taking in the piece is multifold. It's heartening to see a forlorn and homely object cared for and revived.Â The piece's handiwork evokes the human touch. But the object's greatest appeal may lie in its demand that you be present to everyday life, and connect with it.

"How many times do you see someone going down the street with their head pressed to the phone screen?" Krupa asks. "They don't see the world around them."

In a culture of inattentiveness, an unprepossessing object doesn't stand much of a chance.

"The bike had been here so long and looked so nasty that most people didn't see it anymore," explains McEntire. "And now, they can't wait to get their hands on it."