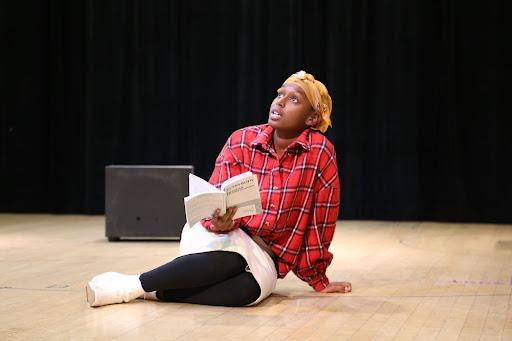 Eboni Edwards rehearses one of several roles she'll need to be prepared to play in Everybody, a play by Branden Jacob-Jenkins. (Courtesy of IU Theater)

Indiana University’s upcoming production of Everbody has something in it for, well, everybody. Everybody, a Branden Jacobs-Jenkins play, addresses the issues of mortality and identity, themes that make it an appropriate addition to Indiana University’s College of Arts and Sciences’s “Themester” of identity and identification. The play's director, Lauren Diesch sat down with WFIU Arts to tell us about herself, the play, and why it’s a production worth seeing.

“Everybody is about…human’s struggle to accept our mortality and dismantling the idea that we need to fear what’s coming next…it is scary but everyone goes through it. It's a play about life, it's a play about death, and it’s a play that asks us to be kind,” Diesch said.

Diesch has been in theater since childhood, working in just about every position. From actor to director and even sometimes playwright, she has obtained diverse and rewarding experiences in theater throughout the years that have shaped her craft today.

“My day job was administering as an associate artistic director and a director of education for a theater company that used theater to create change…I really carry that work with me. To me, storytelling in theater is best when the audience is thinking about a thing when they’re leaving,” Diesch said.

Diesch’s vast experience also serves as a helpful tool when incorporating perhaps the most challenging aspect of Jacob-Jenkins’s production: the live lottery. Before each performance, the actors must participate in a live lottery, in which the actor performing the role of “Everybody” will be chosen on the spot.

“I have five very skilled actors who have memorized basically two-thirds of this play, and they will be taken through this lottery every night…my actors are both loving and hating me for this process,” Diesch said with a laugh.

However challenging it may be, lottery and all, Diesch and her actors are committed to conveying the complex message Everybody contains. Diesch believes the play to be relatable to audiences and a worthwhile production to see.

“We’re living in a time where everything around us seems awful, doesn’t it? We have a war in Ukraine, we have protests, we have just gone through a pandemic where people lost lives and where people confronted their own mortality…this play–it really asks us to listen to each other, to try to be kind to each other, to try to understand each other first. It's a play that hopefully has people thinking about the good deeds that they do and the harm that they do ‘cause we all do both, and [it] encourages us to lean towards those good deeds as opposed to not caring about the harm,” Diesch said.

Everybody opens at the Wells-Metz Theatre this Friday, September 30th at 7:30 pm. Other showtimes will take place on October 1st and October 4th through the 8th at 7:30 pm with an additional matinee showing for 2 pm on October 8th. Further details can be found on the Indiana University Theatre Department website, with the option to purchase tickets directly from the website or from the IU Auditorium Box Office.