Diane Kondrat: And it's a beautiful story. It's such an uplifting. story about dealing with life disappointments through the appreciation of what you can manage to appreciate in those moments. And because it has some audience interaction, the audience... I'm going to put money down on this... by the time they leave the show is gonna leave them really happy.

Oh, you're waiting for me to fill in the blanks. I know them all. I know all the blanks, it's a beautiful show that was first written for a Fringe Festival and has been done all over the world. The guy that wrote it with assistance from a standup comedian made it so that anybody any age, any gender can do the show.

George: Wow, Yes, these days right? How can that even happen?

Diane:I think it's going to be true.

It's a very interesting schedule because Cardinal had to work around some weddings at McCormick’s Creek, and so the last thing I heard,...though, we have some rain dates,...is there's only going to be about 7 shows between September 5th and September 12th, and they're all on the Cardinalstage.org website where all the tickets are, pay what you will.

I stayed in Portland, quite a bit. Lots of people say I work a lot; I can work more. This is true and so I try as much as I can, but I've been doing regular stage productions and also sketch comedy with Spectralgasm a wonderful. Sketch comedy group out there that keeps me being seen by lots of people 'cause they do late night shows for cheap. I get seen by people being funny. That's one of the things that they show. People need to remember it was developed with the assistance of a standup comedian. It's a funny show.

George: Tell us a little bit about as I understand, Every Brilliant Thing has to do with a young woman counseling her mother.

Diane: Yes, and actually it starts when this person is 7 years old and mom tries to kill herself and the child is like, “Oh no, that's a bad idea.” Here's some, here's some good reasons for you to stay alive . So early on in the list, which is the Every Brilliant thing list. There are things that most appeal. to a child. But then as the person grows up and other things happen in her life. Other kinds of things more ornate, more specific, more detailed. Appreciations get put on this list and it helps her to get through her everyday life. Just like it would help either of us if we paid attention to the things that we can be grateful for rather than going. “Oh no everything is terrible right?”

It's Duncan McMillan and Johnny Donahoe creation. September 5th through the 12th at McCormick’s Creek Amphitheater.

And it's Cardinal Stage Company. It depends on how much you want to contribute. 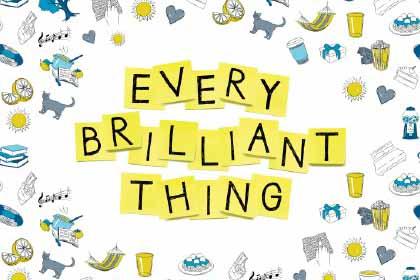 A seven year old girl with the audiences help tries to convince her mother not to commit suicide...and it moves on..
Support For Indiana Public Media Comes From
Tweets by wfiu