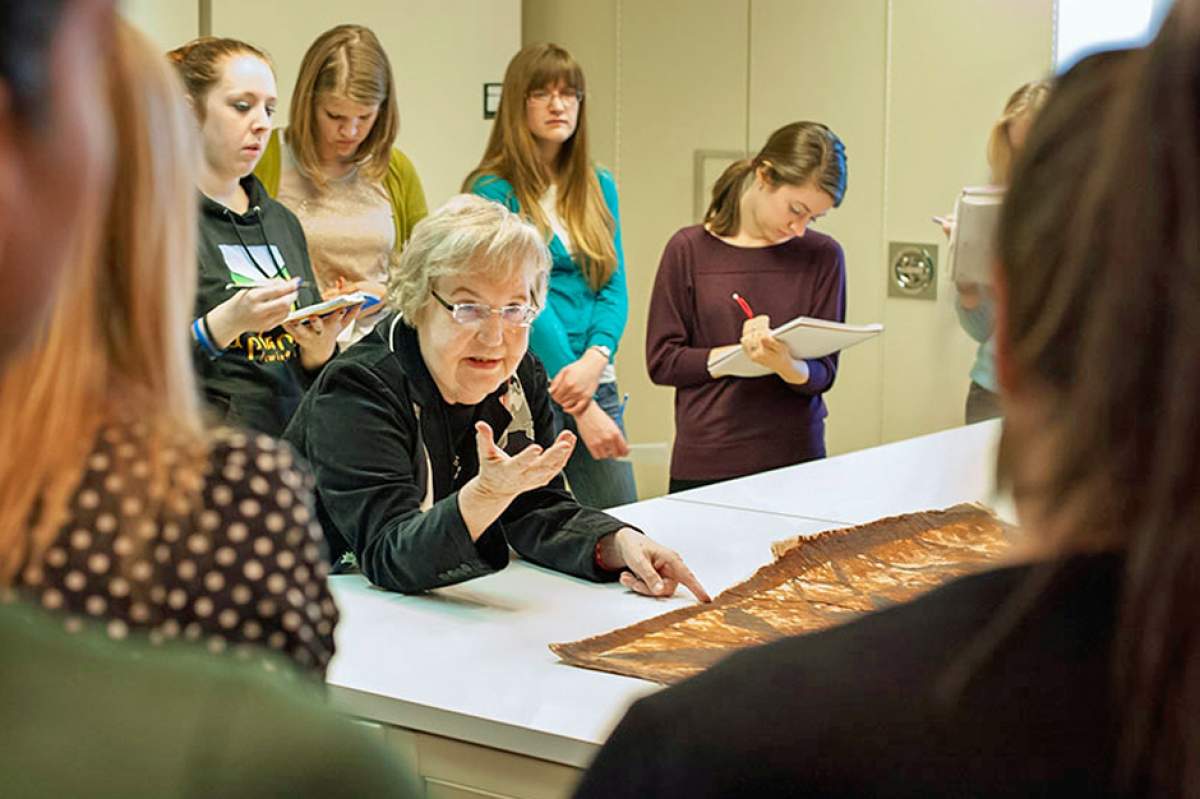 Anthropologist Adrienne Kaeppler spent 40 years tracking down the collection of a little-known 18th century London museum. You could call her, as I did, an "ethnographic detective."

"Yes," she says with a smile in her voice, I will accept that title."

A curator at the Smithsonian Institution, Kaeppler is a leading authority in the art and culture of the Pacific Islands.

She recently spent a week at IU-Bloomington, where she visited with students enrolled in an art history course and gave a public lecture on her four-decade quest to catalog the contents of the Holophusicon, which Kaeppler describes as the first popular natural history museum of science, curiosity, and art.

An energetic woman in her late seventies, Kaeppler gave a public lecture about the Holophusicon on January 17th in a lecture hall at the Hope School of Fine Arts.

Half a Lifetime's Work

She began by going over the objects in the Holophusicon's collection that made it so important to ethnographers. Among its 30,000 objects were both "curiosities" for the general public, and objects of scientific value. These included sculptured heads from the Cave of Elephanta in India; Oliver Cromwell's armor; the Turkish clothing and guns of Edward Wortly Montague; and type specimens of Pacific birds, fishes, shells, and insects.

"The specimens and objects were not just objects of curiosity," she told the standing room only audience. "Many natural history specimens from the collection were illustrated in all the late-18th century scientific works."

"But where are all these specimens and objects today?" she asked. "What happened to the more than 7,000 lots that were sold at auction, and disbursed around the world? Well, this has been part of my research for four decades."

Her four-decade search culminated in a coffee table-sized book containing some 1,000 photos: Holophusicon: The Leverian Museum, An Eighteenth-Century English Institution of Science, Curiosity, and Art.

A Museum for Everyone

"Leverian" in the title refers to the museum's founder, English collector Sir Ashton Lever. He called his collection "Holophusicon" from the Greek meaning "embracing the whole of nature."

"But the Holophusicon was open to anybody," Kaeppler said. "It was probably the first important museum to which anyone could go."

There was a small admission fee, but, says Kaeppler, "Lever opened it to anyone who was interested-scientists, children, jaded socialites-who all came to look at his very interesting materials that embraced all of nature."

The Holophusicon attracted visitors from around the world, including U.S. President John Adams and founding donor of Smithsonian Institution James Smithson.

Among the museum's treasures was the largest collection ever exhibited in one place of the specimens and artifacts brought back by Captain Cook on his three Pacific voyages.

"They were really wonderful pieces that have stood the test of time," says Kaeppler.

Pieces from the collection are still used by scientists today. One of those scientists will be Teresa Wilkins, an IU doctoral student in the History of Art department who studies Oceanic art. She came from Florida especially to attend Dr. Kaeppler's lecture.

"My whole life is devoted to looking at the provenance of Cook pieces," Wilkins said. "I'm a huge fan of Adrienne's."

The Holophusicon was opposed by some members British scientific establishment, such as Sir Joseph Banks of the British Museum. Banks refused to take the contents of Holophusicon when the museum closed-even though its collection was in some ways superior to that of British Museum's.

"When it was offered to British Museum," Kaeppler says, "Sir Joseph Banks said, â€˜There's nothing here worth having.'"

"He was a rival collector," adds Kaeppler. "He did not want any other people giving to the collection, or getting credit for having a better collection than he did. It was just jealousy!"

Ultimately, Lever couldn't afford operate the Holophusicon and closed it in 1806. It had been in operation only thirty years. The collection was divided into 7,000 lots and sold at auction. Kaeppler's task to find where the pieces had gone, a process she compares to finding to detective work.

She started her search by rounding up the auction catalogs. This was, she notes, before the advent of the Internet. Crisscrossing the globe, she eventually turned up twelve catalogs.

She knew that collection had been auctioned off to 140 purchasers. She had to find out who these purchasers were, what items they bought-even what the items were called back then.

To illustrate, she holds up a paper coffee container. "Was this cup called a cup, or was it called a paper stand?"

In her detective work Kaeppler had an ally in a young 18th-century artist named Sarah Stone. Stone had painted hundreds of watercolors of the museum objects, all done in meticulous detail.

"What important about [Stone's] drawings is that she was so precise. Especially for ethnographic objects-all of which are unique, of course-she did the details so well, that if, for example, an object had seventeen points on it, she usually did the seventeen points. Whereas other objects of its type might have twenty-five or six . . . . From her ethnographic drawings she made it easy to identify specific things."

Although Kaeppler's book on the Holophusicon is finished, her quest to find still-missing pieces of the museum's collection continues.

"Every museum I go to, I'm looking for those things that have been illustrated and not yet found."

"It's one of those things that, you'll never be done. The end will never be there."